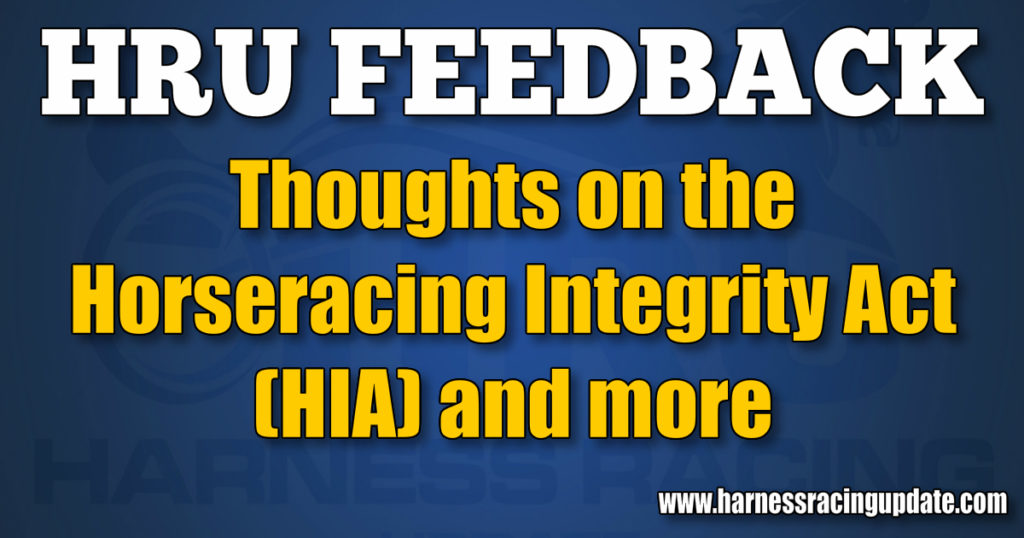 I have a huge problem with USTA not endorsing this. After watching several harness racing trainers be indicted for drugging their horses, does USTA not realize that they were caught by FBI NOT the regulators? They allegedly killed horses according to the wire taps and no drug test caught them. Until this I was against HIA. Now I realize that racing cannot regulate itself. Racing commissions are weak, incompetent and doing nothing. Sorry but we need this. You can tweak it to make it better. Our horses’ lives depend on it.

More thoughts on the HIA

Mr. Williams, with all due respect I was embarrassed for you when I read your argument in favor of race- day Lasix: “The state racing commissions apply immense learning and experience to protecting the welfare of the horse, and they permit race-day Lasix.”

It is the failure of the various racing commissions to protect the integrity of horse racing, and harness horse racing in particular, that requires the intervention of the federal government if racing is to have a future. And your best argument is they have been allowing this as to go on so it should continue as the status quo?

It’s our show, why don’t we see more of the pie?

I’m just a simple minded horseman that doesn’t understand where the handle goes. But my thing is why in 2020 where people make millions off YouTube and Twitch don’t the horsemen see more of the handle? Why aren’t we fighting for a larger piece of that pie? It’s our show, so shouldn’t we receive a nice chunk of that.

Also advertisements, why aren’t we selling commercials between races to local businesses? Doesn’t have to be huge money but anything is better than nothing. The COVID-19 pandemic has shown the holes in the system and we should work to fix them as an industry

Replying to The Guru

In reply to The Guru on the state of women and people of color as harness drivers and trainers (full story here), he is correct that family traditions have contributed to a fairly closed shop. The Nobles and Lachances are examples of family history in racing, as we’re beginning to see with Andy and Erv Miller. So it’s really tough to break the barrier unless there are family or friend connections, or you can financially sustain access say, like Peter Kleinhans (NY/NJ) or Jerry Kehm (PA). Once proven, it’s still tough, as George Teague recently suggested that all things equal Montrell T should be getting more catch drives. Guru doesn’t take note of our friends from Mississippi who are dropping anchor in Chicago and having good success as trainers and drivers. Seems every race card there’s a driver or trainer of color; a good thing. We’ll see how this plays out when casino cash quadruples the purse account in the coming months. Bea Farber held her own when Chicago was at its peak, and old-timer Edith Mouw on the same circuit could move a trotter out of non-winners whenever she chose. And what about Jo Ann Looney (King)?