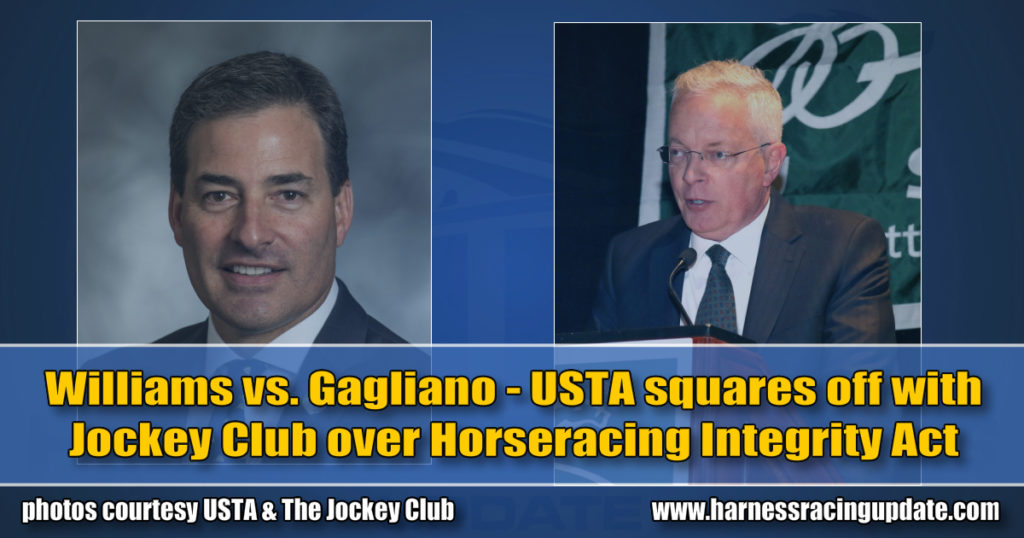 USTA squares off with Jockey Club over Horseracing Integrity Act

In the first of this two-part series, USTA president Russell Williams debates The Jockey Club president Jim Gagliano over the federal legislation currently before Congress.

Congressional support seems to be increasing for the Horseracing Integrity Act (HIA), the pending federal legislation that would dramatically alter the legal and political landscape of horse racing in the United States. It is possible the measure will get a vote on the floor of the House and Senate either before or, more likely, after the November election. Senate Majority Leader Mitch McConnell, after all, represents the state of Kentucky.

As a potential decision-day approaches on Capitol Hill, and as racing integrity issues continue to haunt the industry, we thought it prudent to give the harness racing community an opportunity to flesh out some of the details of the pending legislation and to get answers to some of the basic questions that have been floating around about the measure for years.

We asked United States Trotting Association (USTA) president Russell Williams, who also is the CEO/president of Hanover Shoe Farms, and Jim Gagliano, the president of The Jockey Club, to engage in a virtual debate with one another over the legislation. Williams ardently opposes the HIA. Gagliano supports it and thinks the harness horse community should, too.

The ground rules were this. In Round 1, we submitted questions to Gagliano, who answered them. Then Williams responded to Gagliano and Gagliano replied to Williams. The order was reversed in Round 2. Here’s Round 1. Round 2 will be published here in Friday’s HRU and our hope is to publish some of your responses in the Sunday edition

Cohen: Why is the ban on Lasix necessary?

Gagliano: “To be clear, the bill does not ban the use of Lasix outright. It bans the administration of medications on the day of a race. Horses race almost everywhere else on the planet, across all breeds, without the administration of a medication — Lasix — on race day. Why should 95 per cent of horses need to be prophylactically administered a therapeutic medication, almost entirely without a diagnosis, for a condition that affects approximately just 5 per cent? The use of race-day medication indicates to fans that our horses are not healthy enough to race on their own merits, something the rest of the racing world — including standardbreds — has proved they can do.”

Cohen: How would the authority set up by the new law address medication concerns specific to standardbreds?

Gagliano: “The short answer is that the bill contemplates the creation of different rules for the different breeds racing in the U.S. By way of background, the Horseracing Integrity Act would empower a private, not-for-profit organization to create and enforce medication and anti-doping rules for U.S. horse racing. While the rules would be subject to limited approval by the FTC for Constitutional law reasons, the rules themselves will be created by the authority. Importantly, its board will be composed of persons with demonstrated expertise in many facets of horse racing (with diversity of representatives from the three major breeds) and also anti-doping experts from USADA (the same folks who handle anti-doping for our Olympic athletes).

So, to make it clear, and contrary to publicized assertions by some that the HIA would create “a one-size-fits-all approach” for all breeds, the bill expressly calls on the new authority to take into account the unique character of racing of the different breeds. So long as a differing medication rule does not compromise the welfare of the horse or the integrity of competition the authority would be acting consistently with the HIA by having different rules for different breeds.

Russell Williams’ response to Gagliano: “The state racing commissions apply immense learning and experience to protecting the welfare of the horse, and they permit race-day Lasix. The draft bill completely ignores that. Its only reference to the Association of Racing Commissioners International Model Rules, which permit race-day Lasix, equates them to the World Anti- Doping Code, which does not permit it. Why would international rules pop up in a bill in the United States Congress? The bill itself spells out the reason: because “uniform” national anti-doping and control standards “will improve the marketplace for international sales of United States horses.

“Improving the marketplace for elite thoroughbred horses is actually the main purpose of the bill. I quote from a panel given at the 2019 Jockey Club Round Table:

JOHN MESSARA: [H]aving a national drug policy… akin to the other developed industries and jurisdictions in the world… would unleash a monster here, an economic monster…

As it stands today, it’s difficult for us to judge whether we should be buying a mare, was she treated with Lasix, did she, you know, was she on bute at some stage, what went on, you know? So rather than get bitten by it, we stay clear. The same is applying to us as far as stallions are concerned.

“Economic motives are not inherently bad, considering that horse racing provides hundreds of thousands of jobs and billions of dollars in economic impact. Doubtless the supporters of the bill care about the welfare of the horse, but unleashing ‘a monster of economic rewards’ without improving the welfare of the horse is an unacceptable reason for federal legislation.

“The bill does nothing to improve the lot of racing horses. We can dispense with the 5 per cent assertion, which selectively uses epistaxis, representing blood gushing from the nose. The Jockey Club’s own landmark, peer-reviewed 2009 study showed that 80 per cent of the 167 horses in the study suffered from EIPH (Exercise-Induced Pulmonary Hemorrhage), which Lasix alleviated in subsequent races. Veterinarians estimate that 95 per cent of racehorses bleed at some point in their lives.

“Lasix is the only therapeutic medication known to alleviate EIPH. It does not enhance performance. It does not mask other substances. If we look at the rest of the world, Lasix is used liberally on every other day but race day. Why would we deny this safe and effective – but short-acting — therapeutic to a horse on the day of its greatest pulmonary stress? Far from supporting the welfare of the horse, denying Lasix on race day is inhumane.

“We, as an industry, must rein in our economic motives instead of unleashing them, and look instead to science, veterinary knowledge, and to our love for the horse.”

“Further, it seems that the USTA is only content to rely upon the ‘immense learning and experience’ of the state commissions when it agrees with the rules that are in place. A prime example is when the USTA sought to relax the states’ thresholds and withdrawal times for clenbuterol and betamethasone. In November 2018, the USTA’s Harness Racing Medication Collaborative distributed position papers on the pair of drugs to 16 different state regulators in an effort to weaken those states’ rules.

”When you read the Horseracing Integrity Act, you’ll see that it recognizes the ARCI Uniform Classification Guidelines for Foreign Substances, the World Anti-Doping Agency Standard Prohibited List, and the ARCI Controlled Therapeutic Medication Schedule for Horses, in addition to IFHA and the AVMA’s Principles of Veterinary Medical Ethics. The bill perfectly captures ‘immense learning and experience’ and builds upon this progress.”

On the “reference to the Association of Racing Commissioners International Model Rules, which permit race-day Lasix, equates them to the World Anti- Doping Code, which does not permit it.”

Gagliano: “Not true again. Reading the bill is a useful exercise, and I quote, ‘Section 2(3): Uniform adoption of national anti-doping and medication control standards for horseracing in the United States will promote interstate commerce, encourage fair competition and a level playing field, assure full and fair disclosure of information to purchasers of breeding stock and to the wagering public, will improve the marketplace for domestic and international sales of United States horses, will provide a platform for consistency with all major international horseracing standards, address growing domestic concerns over disparities with international rules, and provide for the safety and welfare of horses and jockeys.’

“Further, I see nothing wrong with improving the international marketplace for the sale of U.S. horses, but it is not the main purpose of the bill. If it is an ancillary benefit, I’d be pleased.”

On the 2019 Jockey Club Round Table quote:

Gagliano: “First off, Mr. Williams makes the totally unsupportable statement that the HIA will not improve the welfare of the horse. If he thinks that it is good for the horse to leave anti-doping and medication control in the hands of state regulators who often have no industry experience or, when they do, suffer from conflicts of interest, he is clearly mistaken. Horses will be far better off when the rules are handled by non-conflicted experts in those fields – not by some bureaucrats who were appointed by a friendly state governor.

“Second, John Messara is an Australian breeder and owner and he was speaking from that perspective – and the quote was selectively edited. Here is the full text of what he said on that point:‘Okay, I’m going to say one thing only and that is a bit like what happened to us when we got those legislative changes on tax, I think that having a national drug policy — no drug policy, actually — akin to the other developed industries and jurisdictions in the world, Australia, Europe, etcetera, would unleash a monster here, an economic monster that I — everyone’s talked about why people don’t want it, well, I think one of the benefits is going to be that the likes of myself will start to look at America again as somewhere to shop for horses. As it stands today, it’s difficult for us to judge whether we should be buying a mare, was she treated with Lasix, did she, you know, was she on bute at some stage, what went on, you know? So rather than get bitten by it, we stay clear.’

“For the perspective of U.S. horsemen and horsewomen who support the bill, read the comments of support via the Water Hay Oats Alliance, which includes such people as Hall of Fame trainers Ron Gurfein and Jimmy Takter, leading owners and breeders Cindy and Steve Stewart, and racetrack operator and owner/breeder Jeff Gural.”

On Williams’ assertion that “the bill does nothing to improve the lot of racing horses.”

“With the exception of the most severe EIPH (endoscopy score of 4), long-term athletic performance in racing is not affected by EIPH. Stated differently, and I quote from the authors, ‘On the basis of results of the current study, we conclude that there is no association between EIPH grades 0, 1, 2 and 3 and long-term racing performance of thoroughbred racehorses.’”: Prospective study of the association between exercise-induced pulmonary hemorrhage and long-term performance in Thoroughbred racehorses. Sullivan, et al., Equine Veterinary Journal, DOI: 10.1111/evj.12263, 2014, 1-8.

“Stated alternatively, for all horses but those with the most severe form of EIPH, which is believed to be approximately 5 per cent of the population, Lasix is an unnecessary prophylactic treatment administered to nearly 95 per cent of racehorses for the purposes of enhancing performance, principally through weight loss and, to a lesser extent, by reducing the effect of fatigue on muscle performance (see effect of Lasix on blood pH and analytical compensation necessary when testing for TCO2 to account for Lasix).

“Lasix makes horses run faster, especially the 95 per cent of horses that do not need it.

“Hundreds of thousands of horses race internationally, collectively making millions of starts every year. The statement that ‘denying Lasix on race day is inhumane’” is an affront to every international owner and trainer – and to every owner and trainer in the U.S. who chooses to run their horses without the use of Lasix. The fact of the matter is that horses all over the world, including the U.S., race safely and successfully without race-day Lasix.”