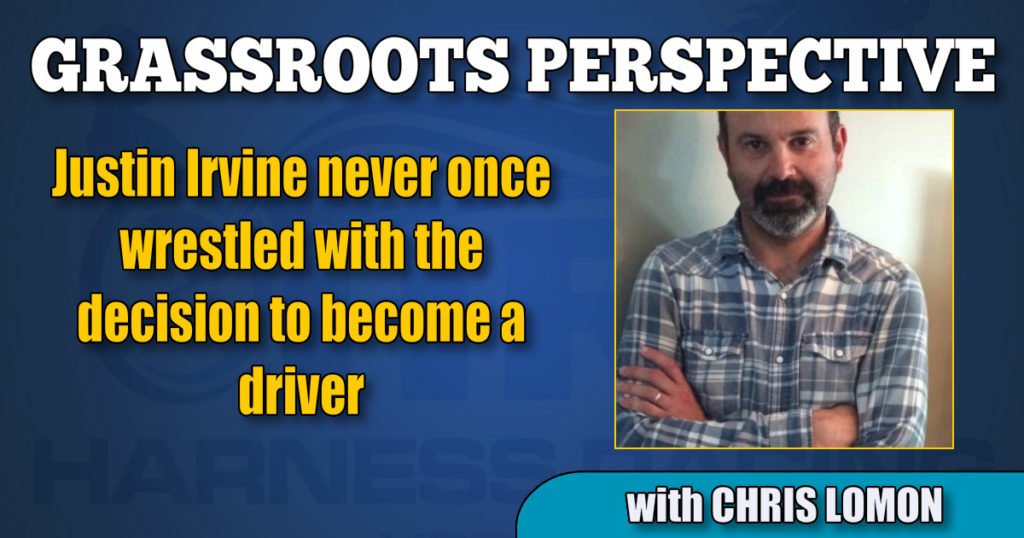 Justin Irvine never grappled with his decision – not even for a moment – to become a standardbred driver.

In many ways, the teenager from Aurora, OH, the one with some serious wrestling skills, was destined for a life in the race bike.

Irvine’s father, Don Irvine Jr., has recorded over 7,400 driving wins and is immortalized on Northfield Park’s Wall of Fame in Ohio. The 18-year-old’s uncle, William Irvine, has 3,000-plus driving wins to his name. His grandfather raced for over 45 years.

Some big horseshoes to fill, but for an up-and-coming driver, it was never about being duty-bound to join the standardbred ranks.

Instead, it was all about discovering a passion and chasing a dream.

“My family has been very successful in racing, but for me, it’s something that I always wanted to do,” said Irvine, whose brother and cousins are also looking to carry on the family racing tradition. “I wanted to be a driver and a trainer.”

Irvine’s actions proved to be just as telling as his words.

The HHYF camp alumnus teamed with Cruzing Hill, owned by George and Rose Bonomo of Illinois, to win by 25 lengths over a sloppy track in 2:01.2.

Irvine hasn’t missed a beat since then.

This year, he’s set a slew of career-best marks across the board, making a name for himself mostly on the Ohio fair circuit.

Irvine’s also competed at The Red Mile and Northfield Park, racking up some nice wins along the way.

Most importantly, he’s sharpening his skills in his quest to become a full-time catch driver.

Less than 250 drives into his career, Irvine has already learned what admittedly seems like innumerable lessons – some of them good, others tough – for what’s needed to be successful in the sport.

Case in point: an unexpected fourth-place finish with trotter Blazintothefront on Aug. 14 at Jefferson.

“Todd [trainer, Luther] had two horses in the race and the other horse won it,” said Irvine. “Todd thought it would be the other way around, and so did I. Blazintothefront, he’s a big horse and there’s a lot of tight turns at these fair racetracks. But that’s horse racing, really. So far, there’s been a lot of ups and downs, especially since I’m young and I’m not driving a lot of horses.”

One of the biggest hurdles Irvine has contended with is overanalyzing his drives both before and after a race.

Admittedly, he’s at his best when he’s done his homework, but allows himself to make a change of plans once the gate opens.

“I have to learn to let [results] go after it’s happened because there’s nothing I can do afterwards. But it’s tough being 18-years-old because you want to do well with every horse. When you’re young, you want to make a name for yourself. But I think I’m getting better at it because I’m driving more horses now, especially at the fairs. Today [Aug. 14], for example, I was in the first seven races. So, I didn’t have much time to think about happened the race before or what was going to happen in the next one. I just went out and raced. That’s what I’ve been teaching myself.”

“I read the program every night before or the morning of the races and I don’t want to get into a habit of over-analyzing too much. It doesn’t always happen as it looks like it does on paper. I’m learning to go with what unfolds on the racetrack. Anything can happen going into the first turn, behind the gate – you just have to be willing to adapt. And I know I’m doing that. Every race you’re out there, you’re learning something. I think that’s what differentiates really good drivers from okay drivers. I want to be a great driver when I get older and the ability to change your plan at the drop of a hat is an important skill to learn.”

Having horses like Blazintothefront helping educate him along the way has been a big benefit to Irvine.

Nvrpoptdaplugs, a 3-year-old pacing son of Big Bad John, is another favorite of Irvine’s. He teamed with the bay gelding to win consecutive races in early August, including a 7 ¾-length triumph at Wapakoneta, a half-mile oval located about 56 miles north of Dayton, OH.

All three are Ohio-breds trained by Todd Luther.

“Blazintothefront, he’s just phenomenal,” said Irvine. “I can drive him however I want. He’s big and powerful. Nvrpoptdaplugs, he’s a really nice horse… crazy fast. He’s great at these fairs. He’s still trying to figure out when to use his speed and when not to. When you ask him to turn it on, he turns it on. I don’t think there’s a horse that has a gear like him in the entire fair circuit. Conley Lane, he had a little trouble at the beginning of the fair season, when it came to steering. Now, we have him straightened out and he’s coming into his own. Todd’s done a great job with all three of them.”

The same can also be said of Irvine, who continues to garner attention for his talent in the sulky.

Although wrestling and racing seemingly have little, if any, in common, the young horseman sees several similarities between the two.

“I wrestled for three years in high school and I think that helped me a lot as a driver. One, it helped to control my nerves. When I was 16 and 17, I would be nervous before driving a horse. The more I wrestled I wasn’t full of nerves when I went out on the mat. I went out there and did what I could. That’s really helped me in my approach on the racetrack. I was recently in a Stallion Series that was going for a $17,500 purse – the biggest purse I’ve driven for so far – and I was a little nervous before, but once I got out there, I wasn’t at all.

“I think wrestling has also helped me to think and react quickly. Anything can happen when you’re out on the mat against one person, so you have to go with what you’re opponent gives you. That’s the same for horse racing, except you have more opponents. You have to go with what everyone else gives you and based on that, you come up with the best way to win that race.”

Open-length win or off-the board finish, Irvine, who enjoys golfing or boating with friends in his free time, wouldn’t want to be doing anything else.

“It might sound weird, but the adrenaline rush I get from being in such tight corners… it’s just hard to put it into words. I love that feel of being in the middle of the action, and knowing this is what racing is all about. I never thought it would be just like that, knowing you’re just inches away from someone who has the same goal as you do. That’s why you need to be at your best every time the gate opens.”

Not a problem for one of horse racing’s top young talents.