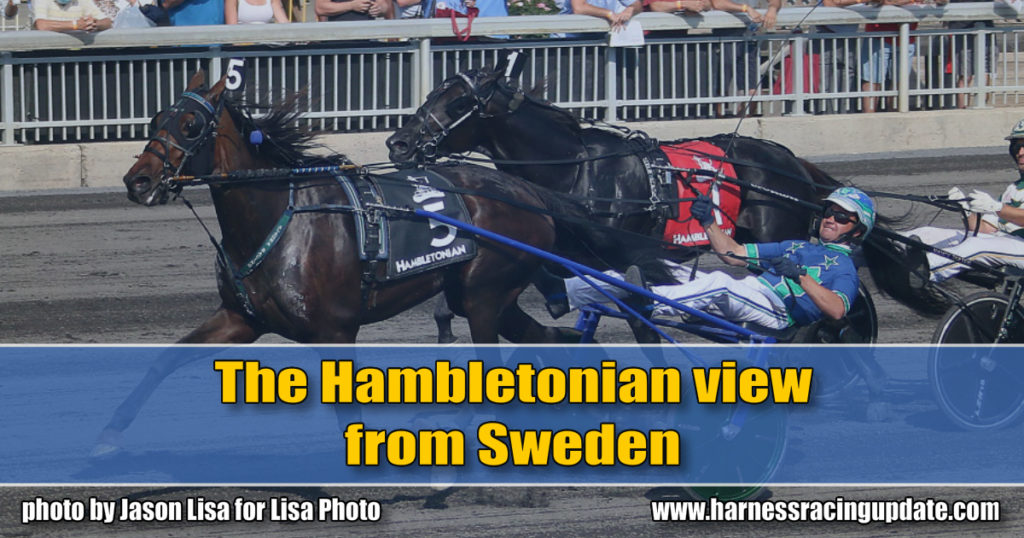 The Hambletonian view from Sweden

Hambletonian Day has fascinated European harness racing fans for several years and maybe there is a simple explanation why this particular Saturday in August is special on both sides of the Atlantic Ocean. American trotters are, in most of the European harness racing countries, dominant in the stud books — and have been for many years.

In Sweden, ATG (the national betting company for horse racing) broadcast the simulcast from the Meadowlands and three Swedes translated the show from ATG’s own studio — one anchor man, one man who called the races, plus one expert with knowledge of American harness racing after an active career as groom and second trainer and trainer in USA.

Björn ”Bernie” Norén, with many years’ experience working for Jimmy Takter and Åke Svanstedt — in addition to his own career as trainer in America — served the viewers in Sweden with information about horses and American harness racing in general that few other ”experts” could have presented today.

For the interested and curious crowd, Norén’s knowledge is helpful and even if you’re not interested in betting, you get to know something about many horses, trainers, drivers and owners.

This year, it took only two races from Meadowlands for there to be a stir on social media from Swedish harness racing fans critical of one-handed whipping. It’s well known that racing rules in all countries differ. Harness racing doesn’t have an international governing body that sets the rules worldwide as FIFA does in soccer.

Every Hambletonian Day, Swedes tend to fall into the same pattern around the whipping issue. They have a choice — accept the rule difference, as much as Yannick Gingras, Doug McNair and James MacDonald did when they competed in World Driving Championship in Sweden last summer, and watch the races, or stay away from the broadcast.

On the track, Europeans are a little bit spoiled with several great victories in New Jersey over the year, so there were expectations for Saturday’s race card.

Nancy Takter and Marcus Melander presented horses in great shape in two of the most prestigious races on the card ahead of the Hambletonian and from a European point of view, many fingers were crossed for Ready For Moni and Back Of The Neck, both sired by French sire Ready Cash.

In the end, the Hambletonian was something of a déja-vu-experience for European harness racing fans since Muscle Hill (sire of Ramona Hill) and Ready Cash are the two dominating stallions in many countries on both sides of the Atlantic ocean.

The home stretch never really developed as a tough fight between the top three horses, but anyway, it was Muscle Hill and Ready Cash that dominated even on American ground and we can imagine that French fans, with their closed stud book, are pretty proud with the successes from Ready Cash’s offspring in the U.S.

Big congrats to the connections of Ramona Hill from Europe. What a filly!

And that driver… McCarthy something… that’s a man I would like to see on a five-eighths mile track north of Stockholm soon.