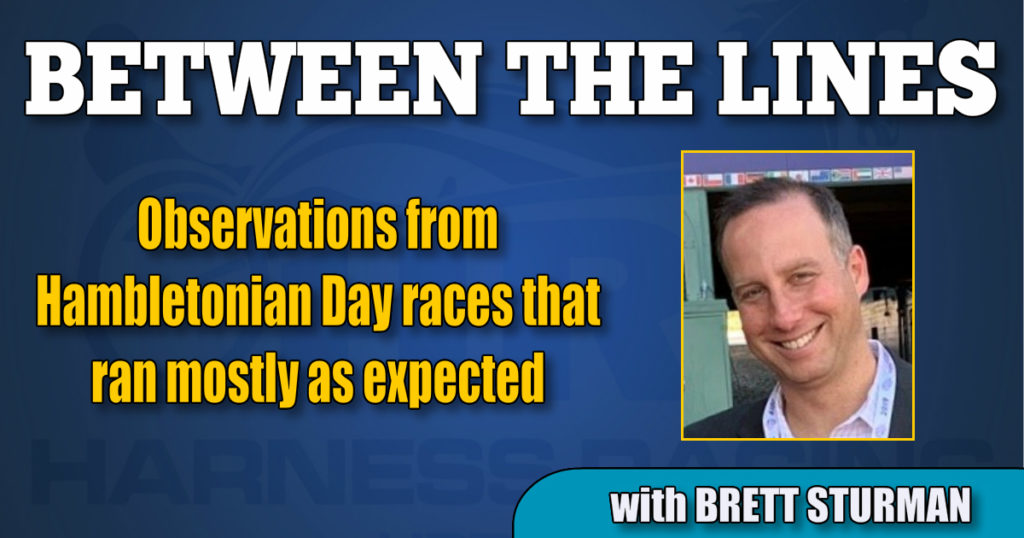 Observations from races on Hambletonian Day that ran mostly as expected

Nearly all other major races through the stakes-laden card had somewhat predictable results, as well, with one notable exception, though the action certainly wasn’t lacking.

Early in the card a pair of 1-9 shots were featured. Reflect With Me was able to survive and get up late by a neck over stablemate Lady Lou in the Shady Daisy, but Manchego didn’t share that same fate in the John Steele Memorial. Seemingly having it her own way on the front, Manchego couldn’t fend off an attack from When Dovescry that came at about the 3/8th’s and had to settle for third when Plunge Blue Chip passed her also from the inside. There was no show betting in the small field, but there was somewhat bridge jumper place prices with When Dovescry paying $11.20 to win and a not much less $8.60 to place, while Plunge Blue Chip paid $16.40 for second.

The price on When Dovescry was no doubt inflated by the overpowering mile that Manchego was coming off at Plainridge. It’s always easy to say in retrospect, but her win was no surprise on paper. Making her third start of the year, she faced males in both the Hambletonian Maturity in a race won by Gimpanzee, and then just missed against an iron-tough veteran in JL Cruze. And if there were any doubters as to the talent of When Dovescry, hopefully this race put an end to that. Formerly trained throughout her career by Rene Allard, she made her third start for new trainer Brett Pelling and showed that her success, including a win on this same day last year in the Hambletonian Oaks, should be attributed to nothing other than her own talent.
While Manchego didn’t fire her best following her win the Spirt of Massachusetts Trot, neither did the runner-up from that race, Atlanta. But who did fire a big one on Saturday that exited that same race was Lindy The Great.

Set off at 28-1 in the John Cashman Memorial Trot, Lindy The Great came first-over to put away Atlanta and lead into the final stages of the race. An upset looked within reach, but Gimpanzee was able to be one of the few horses to close from off the pace on the day and got up by less than a length for the team of Sears and Melander. One of the horses that I liked in the race and touted here in Friday’s column (full story here) was Guardian Angel As. After leading early and then yielding to Atlanta for the pocket, Guardian Angel As was locked in behind that leader with nowhere to go for half the stretch and once he found room with apparent trot, promptly broke. It seems when you need it, the inside never opens up on these mile tracks, but when you have the leader it seems like the inside opens up about five paths at the top of the stretch. As for Gimpanzee, he’s now run his unbeaten record this year to 5-for-5 and is in the midst of building a very impressive seasonal resume. For the winning drivers Sears, he went over $200 million in career earnings with that win.

And speaking of Sears who arguably remains the best big money driver, sometimes things go to plan and sometimes they don’t. In the Sam McKee memorial, nothing went right about DancinLou as the slight 2-1 favorite. In that race, after a brief tuck into 4thearly, Sears attempted a quarter-move after an opening pane of :25.3 that became pretty apparent wasn’t going to happen. Bettor’s Wish was having none of it as he parked out Dancin Lou past a half mile of :52.1 and did it rightfully so, as he managed to last all the way in 1:47.3 as the third choice in the wagering for Dexter Dunn and trainer Chris Ryder.

In the very next race though, Sears produced one of the highest paying horses ever on Hambletonian Day when his drive Zenith Stride paid $177. A Muscle Hill colt trained by Mark Harder, the 85-1 chance won the $319,000 Peter Haughton Memorial and in pretty comfortable fashion in the end. When horses of odds that high win, you can look at the program 10 more times and still won’t get how a win was possible. But in this case, there’s actually a clear case that could have been made. Now it’s easy to look at it in retrospect and I unfortunately didn’t have it either, but there was always talent here. In debate of how useful qualifiers can be in handicapping, this should serve as a prime example that there is sometimes value. Over a month ago on July 3, Zenith Stride trotted a qualifier in 1:55.3. As if that time wasn’t impressive in itself, the colt he ran second to and was only two lengths behind was Captain Corey, the unbeaten PASS star and arguably the best 2-year-old trotter in the sport right now. Zenith Stride’s biggest issue then was simply being able to stay on stride, but with a flat mile it wasn’t unfathomable to think that he could have been in the mix.

Conversely, there were no surprises with the 2-year-old filly trotters in the Jim Doherty Memorial. In that race, Darlene Hanover took all the money off her 7-2 morning line, was made the even-money favorite over morning line choice Altar and won dominantly as part of a career day for driver Andrew McCarthy.

The signature races on the card, the Hambletonian and the Oaks, couldn’t have gone any more to script. In the Oaks, Sorella was rightfully made the favorite over Hypnotic Am and won the race with her tactical advantage. Hypnotic Am was left with too much work to do after starting from post 12 in the second tier but was able to just hold off a hard-closing Panem, who rallied from the inside. It was a similar story in the Hambletonian, as the top three choices in the wagering ran 1-2-3. Hambletonian heroine Ramona Hill was hammered down to 2-5, and credit to McCarthy for making a decisive quarter-move which then forced Ready For Moni to have to come first-over. Back Of The Neck had every chance, but couldn’t quicken off cover and had to settle for third.

Tall Dark Stranger continued with another odds-on win as he avenged his defeat from the prior week to the wrath of Captain Kirk. Responding to first time Lasix after bleeding last week, he looked as dominant as ever in posting a new career best time of 1:47.1.

Concluding the stakes on the day was Shartin N who once again asserted herself and delivered as another heavy favorite in the Lady Liberty. In winning the race for the third time in 1:48.2 and paying $2.80, she made a group of talented mares look ordinary.