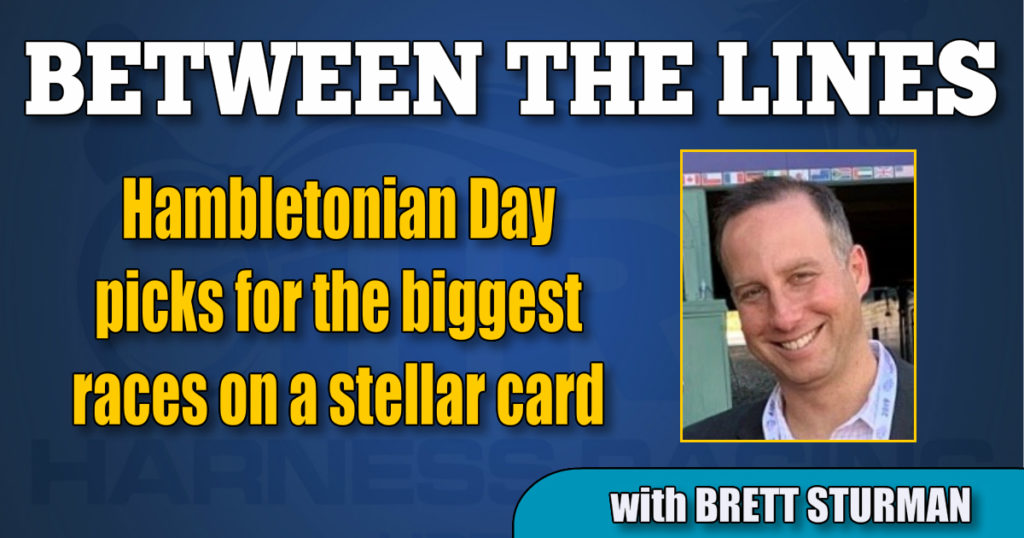 Hambletonian Day picks for the biggest races on a stellar card

In the span of a quarter mile last week, the question shifted from if Ramona Hill could beat the colts, to if any of the colts can now beat Ramona Hill.

Stuck behind gapped cover while fourth over at the back of the pack in her elimination, Ramona Hill stormed home in :25.4 from a near impossible trip and pass by Back Of The Neck shortly before the wire. In the process, she out-closed most of that field by nearly two full seconds and that race will make her a deserving favorite; possibly even at odds-on.

Ramona Hill went into that elimination race as the favorite on the heels of her win in the Del Miller, which was almost as impressive in its own right. In that race, she was used hard and pressed throughout from post 10, including fending off a first-over try from the heavily-backed Sorella, and still won with comfort. When you add it all together, she’s resembled a machine so far this year and will unquestionably be tough to beat in the Hambletonian on Saturday.

As an upset alternative, Back Of The Neck should offer something around his 4-1 morning line, if not even a tad higher possibly. The connections have been high on this one since the start of last year and he’s been solid thus far in 2020. In fact, going back a couple of weeks, he may even have been considered the Hambletonian favorite after his win here in the Reynolds. His rally in that race wasn’t all that different from Ramona Hill’s last week in that he wasn’t even on the television screen at the top of the stretch and was able to get up despite coming from nowhere into a slow earlier pace. It’s true that he was soundly out-kicked by Ramona Hill last week but was still a couple lengths clear of all others. Interestingly, both of his losses this year have come to fillies, and both have come after having open length leads in the stretch. It’ll really be interesting to see how Zeron approaches his strategy as he goes for his second Hambletonian in three years. I’d think that he may want to race Back Of The Neck from off the pace and could accomplish that from post 2, but on the other hand he’s not going to want to give Ramona Hill too much of a head start provided that she leaves from her mid-pack post 5.

For other contenders, Ready For Moni is an obvious threat from the rail. Going for can’t miss connections who look to complete a Meadowlands Pace—Hambletonian sweep, he won his elimination in measured fashion. This is the race that hasn’t been particularly kind to driver Gingras, but I’d expect him to be aggressive for a colt that can win but would need a career-best mile. Threefiftytwo invades for trainer Blais, who won this race last year with Forbidden Trade. It didn’t look like he was ever going to get to Ready For Moni in his elimination last week, but he still showed good trot on both ends of the mile and can surprise.

Sister Sledge is the “other” filly in the field and she raced short of expectations in her elimination despite getting the pocket trip in behind the race winner. Trainer Burke noted this week that she was feeling the effects of having to race without Lasix and that adjustments would be made this week to account for that; bigger problem may be the outside post. Speaking of outside posts, Amigo Volo was just 4-1 last week against Ramona Hill and will now be a big longshot from post 10. He wasn’t terrible in that elimination and don’t forget that he was last year’s 2-year-old Breeders Crown winner; stranger things have happened.

Picks: Back Of The Neck, Ramona Hill, Amigo Volo

This race has featured some great rivalries in recent years and this could preview another in pitting Sorella against Hypnotic Am.

Sorella wasn’t at her best in the Del Miller, though I think that can be excused based from seeing what Ramona Hill has gone on to do since that race. Her two races prior to the Del Miller were strong including a win against colts in the open when she beat Back Of The Neck. She was under recent consideration to enter the Hambletonian; will be my selection to win the Oaks.

Hypnotic Am continues to do little wrong, and it’ll be up to Sears to navigate post 12 for trainer Melander. It’s worth noting that the same connections overcame post 13 a couple weeks ago with Gimpanzee, though that horse was a walkover and this race will be more competitive. May Baby debuted at the Meadowlands last week for Yoder after racing throughout her career in Indiana and made a good showing for herself. Coming first over from before the half against Hypnotic Am, she did well to stay on for second and proved she belongs; not bad for a filly that cost just $8,500 as a yearling. Next Level Stuff is likely a step or two below the top pair but lands the post edge; would be fitting if she were to win following the untimely passing this week of her sire, Sebastian K.

Dancin Lou was brave and determined in winning the Haughton last month and gets the tepid call in a typical wide-open field of FFA pacers. You could make a case for more than half of the horses in here but this one for Camilleri and Sears has been the most consistent. Century Farroh slugged it out with the top choice in the Haughton but will have to be used hard to find a way into; likely will be blasting. Bettor’s Wish had first run into that wicked :52 pace in last week’s open, but tired late after looking the most likely winner in mid-stretch. Hurrikane Emperor was surprised by Shake That House in the non-betting NJ Maturity last week; beat very similar a month ago in the Graduate. American History kept coming last week to have mowed them down for the fast win; another hot pace aids his cause.

Has there ever been a race that’s included three Hambletonian winners? I’d have no think not, but such is the case in this year’s Cashman as three of the last four Hambletonian winners (Forbidden Trade, Atlanta, Marion Marauder) square off and the race favorite might be none of them. Gimpanzee has made easy work in all his races this year including the Hambletonian Maturity when he jogged from the seldom-seen post 13; this will be his toughest race to date this year. Atlanta won the Cutler FFA trot against males a month ago and has been her usual impressive self in every start this year; no disgrace in not being able to get to Manchego in that 1:49:3 mile at Plainridge. Guardian Angel As didn’t get the trip in the Cutler and was scratched sick in his subsequent start; his best would give him a fighting chance at a price. Soul Strong was vastly overlooked for top connections in the Hambletonian Maturity and now lands another potentially good post to rally from. Don’t Let Em remains impossible to predict but wouldn’t be a total shock if he keeps it all together for team Takter. 2016 Hambletonian winner Marion Marauder enters off a 1:50.2 career best mile.

Maybe that Meadowlands Pace win in which Tall Dark Stranger fought back in the stretch took a little something out of him and that’s why he wasn’t as strong last week in the Geers — or, maybe it was time to give him a softer trip, especially in a lesser race and from post 10. Whatever the case, Captain Kirk was out of this world (sorry, another Star Trek pun) last week when taking no prisoners en route to a wire-to-wire score in 1:48.3. After parking a hopeless longshot, Captain Kirk held off all comers including Allywag Hanover and I don’t think that race was a fluke. He was a formidable second in his Meadowlands Pace elimination and while it’s always hard to accept a vastly shorter price one week later, a case could be made that he’s the sharpest horse at the moment.

Tall Dark Stranger remains the one to beat despite finishing off the board last week as the 3-5 favorite. Gingras eased up towards the end of that mile once it was apparent that he wasn’t going to get there and now being right back in, one could reasonably expect that the usual “Stranger” will be back. The road still goes through him. Chief Mate shook loose at the head of the line in the Adios and then accelerated and flew to just miss as a 53-1 bomb. Stablemate Capt Midnight was over-bet in that race and was sixth in a blanket finish; it’s a toss-up at this point as to which of these two is better. Moneyman Hill seems outmatched but lands the rail and makes his second start for Auciello.