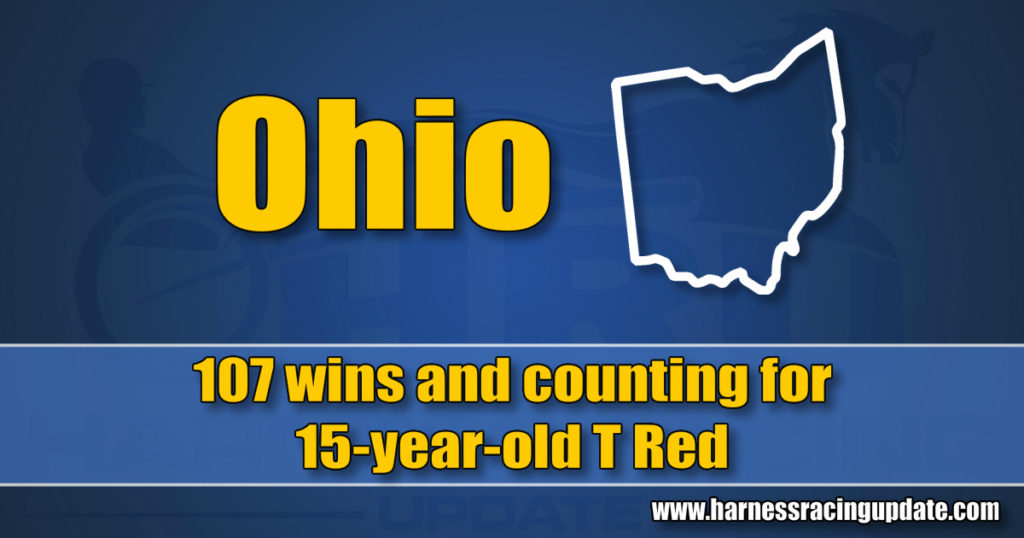 The pacer that was once sold for $800 and a jog cart is closing in on Foiled Again’s 109 career wins — and 10thplace on the all-time wins list — as he continues to race on the Ohio fair circuit.

Racing has been known to impact many lives. But should it make the difference between receiving a celebratory donut or no donut at all, pending the results of $800 races at assorted county fairgrounds around Ohio?

And how in the name of Dan Patch and Adios can those races play a dramatic role in determining the order of the all-time Top 10 North American winning harness horses?

Feel free to bet double or nothing on your favorite jelly donut, because the answer to both questions is a resounding yes.

“Are you kidding me? That’s crazy,” said Gulley.

T Red has won 107 of his 481 starts and currently stands 11th among the winningest horses in harness racing history. With at least a half-dozen starts remaining before he calls it a career this fall, the son of Cams Eclipse could leap over the fabled Foiled Again (109 wins), the sport’s all-time money earner at $7.6 million.

And, speaking of money, T Red qualifies as one of the greatest buys in the pari-mutuel horse trading.

“Two guys I knew bought him and a jog bike for $800, but they decided they really didn’t want the horse, so they offered him to me for $800,” said Gulley. “I didn’t want him, either, but I started jogging him and we’ve been together ever since.”

In tandem on the track and at the bank.

T Red has earned $480,293, pocketing nearly a grand a start with victories at 24 different tracks. His favorite venue has been Northville Downs (26 scores), followed by Northfield Park (24 wins).

“He’s done good,” said Gulley. “He’s bought a lot of cars for my grandkids and paid their tuitions, too. He’s helped me out a lot.”

With racing rules dictating that horses must retire at age 14, T Red’s final start was scheduled for last Dec. 26 at Northfield Park, but he was scratched because of snow and icy roads made the trip from Michigan to Ohio too treacherous to attempt.

“After that, I pulled his shoes. I thought that was it,” said Gulley.

But a conversation with Hay, who calls racing her hobby and participates in the Spring Haven Farm Ladies Driving Series, led to T Red’s shoes going back on.

“He didn’t know that horses that are 15 can race at county fairs,” said Hay, who lives in Celina, OH and works in the distribution center at Crown Lift Trucks in nearby New Bremen.

“I thought I’d give it a try and it’s worked out,” said Gulley.

Hay is so thrilled to be part of Team T Red that she refuses to take a nickel of the purse money, usually $800 a race ($400 to the winner), for sitting behind him.

“He’s a superstar, with many, many fans” she said. “I really appreciate him. He’s a complete gentleman, but he can be lazy, so I have to get after him in our races.”

And nobody pulls for T Red like the gang back at Crown Lift Trucks. That’s because the mornings after his wins a Ladies Driving Series race, Hay arrives with three dozen donuts.

“My co-workers pay close attention to the fair results,” said Hay. “They know when T Red wins and donuts are coming.”

The crullers and bear claws may continue for the rest of the summer and fall as T Red continues to feel his oats.

“If you’d look at him, you’d think he was no more than four of five,” said Gulley. “He doesn’t have a blemish on him and has never been sick a day in his life. I haven’t even heard him cough.”

Gulley is dreading T Red’s retirement, but he does have an idea to keep his favorite pupil in the spotlight.

In the meantime, T Red’s next start is scheduled for Wednesday (Aug. 12) at the Attica Independent Fair in Attica, Oh. The race can be viewed live on the Ohio Harness Horsemen’s Association’s Facebook or YouTube pages.