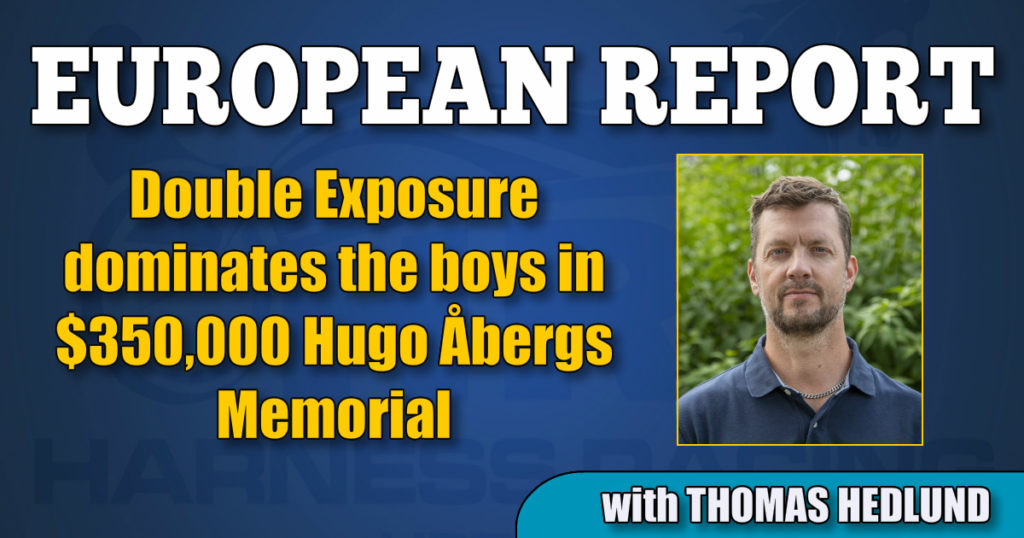 One mare contested the $350,000 Hugo Åbergs Memorial Tuesday night (July 28) and she won against some of the best trotters Europe can offer at this moment. Double Exposure (Donato Hanover), played with the boys in a 1:51.2 mile.

Örjan Kihlström had his tactics in mind from the start. Behind Double Exposure from a great post, there were not many options other than aiming for the lead. In front, Double Exposure simply left her opponents with 300 meters to go and the victory was outstanding.

Cokstile finished second after a pocket trip while Tae Kwon Deo held strongly in a fast finish from position first over.

Four-year-old Ecurie D. was the bettor’s first choice in the race, but the Frode Hamre-trained Infinitif son could never challenge the top trio from fourth over. Driver Erik Adielsson said the race, for their part, was decided when the draw was made. Ecurie D. started from post 10, a tough assignment for any horse, especially for a 4-year-old who was tackling the elite for the first time.

Daniel Redén trains the winner Double Exposure. His pupil Propulsion won Hugo Åbergs Memorial three years in a row (2016-2018), but the son of Muscle Hill is under investigation due to a nerve procedure made in America before he was bought to Sweden and Propulsion might lose all his victories. So when another American bred trotter, a mare in this case, won the prestigious mile race, Redén became emotional.

”How can it be possible that a mare makes this performance? It feels so… special and we’ve been here and won the race three times before and now…yes…yes, I can’t speak right now,” said Redén with tears in his eyes.

Home favorite all the way in Breeders Course final

Jägersro trainer Per Nordström celebrated a victory in the $160,000 Breeders Course 3 years old 2020 Second final as he steered his Chocolatier son Önas Prince to a safe wire-to-wire win in 1:54.4, which is a new track record for 3-year-olds at Jägersro.

Önas Prince owns one attribute that is valuable in mile races on five-eighths mile tracks and that is the ability to leave quickly behind the gate, a weapon that Per Nordström used correctly on Tuesday night.

Vivid Wise As a winner again

Alessandro Gocciadoro-trained Vivid Wise As (Yankee Glide) took over the lead after a quarter of a mile when the $205,000 Gran Premio Freccia d’Europa was held in Naples, Italy, on Sunday night (July 26).

When in front, Vivid Wise As played with his opponents and Alessandro Gocciadoro has done a nice job putting his trotter in such a great shape during the summer. Vivid Wise As was sent to Björn Goop’s stable in Sweden ahead of the Elitloppet, a race in which Vivid Wise As was the bettor’s first choice just a week before the show.

Then, in May, Vivid Wise As didn’t perform at his best, but since he came back to Gocciadoro’s stable in Italy, the son of Yankee Glide has taken big steps towards the very best trotters in Europe again.

Vivid Wise As came home in 1:53.2 and he had more to give, if it would have been necessary.

Swedish trainer and driver Jim Frick (born in 1951) has died at the age of 68. was involved in an accident in March of 2010 and had to quit his active career in harness racing industry. Until then, Jim Frick had achieved over 5,000 victories in the sulky and over 3,000 as a trainer and maintained a big profile in the sport.

In 1987, Frick won the title European Drivers Champion and he’s the only Swedish driver that has achieved that.

Earlier this summer, Frick entered the exclusive Hall Of Fame in Sweden and in 2012 he was designated as Ambassador of honor in Swedish harness racing.

About a year ago, Jim Frick suffered from prostate cancer and on Saturday night (July 25) he died.

Swedish harness racing grieves the loss of a big artist, a gentleman who saw people, spoke to people and liked to be around people all around the tracks.

Jim Frick will be missed by the world of harness racing.