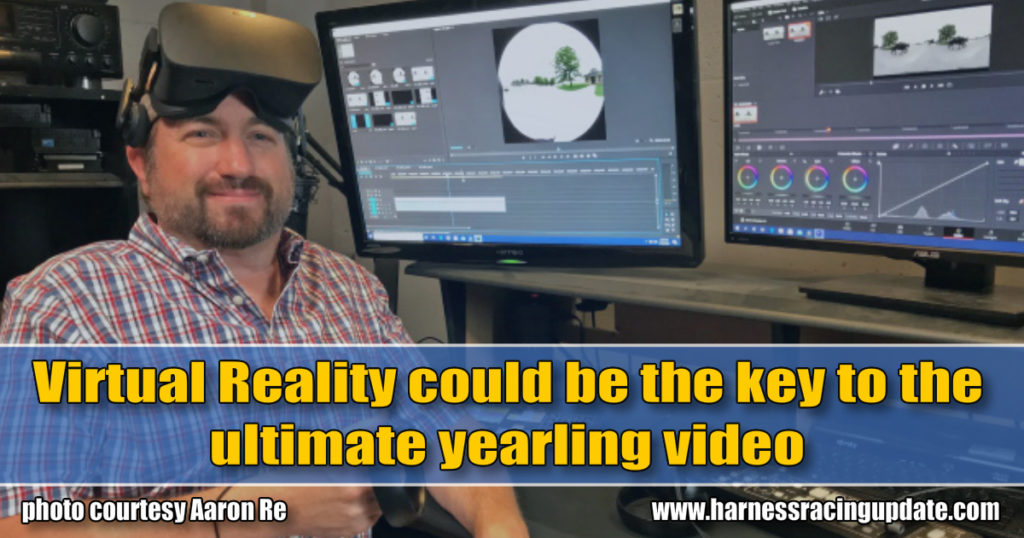 Virtual Reality could be the key to the ultimate yearling video

Veteran yearling videographer Aaron Re believes VR could be a huge benefit to farms during the COVID-19 era when fewer people are expected to be able to inspect horses in person.

Videographer Aaron Re of Hanover, PA believes producing yearling videos using Virtual Reality (VR) technology could be a boon for farms selling horses in the COVID-19 era when in-person farm inspections may be more difficult.

“I’ve been pushing this for four years because I really see the number of people coming to farms gets less and less every year and especially some of these smaller farms that have a half dozen yearlings, people aren’t going to drive out of their way to go to see them. But, with the recent (COVID-19) events, I feel that it’s even more relevant now than ever,” Re said.

VR uses special cameras and technology to produce an immersive three-dimensional (3D) experience when the video is viewed with a special headset.

“In a nutshell, it’s just almost like being there, like the horse is literally standing right in front of you, so you get a much better feel of the size and a better look at the conformation than just looking at a screen,” Re said. “Until you try it, you don’t really get the ‘wow factor’ so it’s a hard thing to explain to people.

“If you watch a (traditional) video on even a 40-inch screen, the horse is still smaller than the horse is in real life. When you put on the headsets, it’s the exact size. It’s like you’re standing there and that’s what people need to grasp.”

Re, who has been producing yearlings videos for 25 years, among other corporate video work, estimates his cost for producing a video in VR is around 20 per cent more than doing a traditional video.

“I think I’ve always been a fair guy in the business, charging a fair price. The added cost for the VR would be minimal, maybe 20 per cent difference over the regular video. It’s not double the price,” he said. “It’s just something that I’m looking to do to help out my good clients. I feel like it would be a real advantage to buyers that may not want to come to the farm.”

Re said he understands there’s a steep learning curve for those that have never used VR and don’t own a headset — especially since standardbred buyers tend to skew older — but he believes this is a good year for people to at least try the technology, which can cost as little as $5.

“I plan on producing some training videos before the end of July to make people aware of what is coming and how to use it, what they need to buy… and these headsets can be as cheap as $5. The higher quality one that I recommend is $150, so it’s a small investment. I feel like once people see it, they are going to say, ‘I need this.’”

The learning curve is the problem videographer Curtis MacDonald of Ontario-based Cujo Entertainment sees with VR gaining widespread adoption in the yearling market. He said he looked into the technology because he was approached about possibly producing VR videos of stallions.

“I thought, ‘How many people are going to actually do this?’ It’s one thing to have VR available, but….let’s say there’s 10,000 people that attend sales, how many of those 10,000 would go out and buy a VR headset? Or would it be something the breeding farms would send you, like, send out an inexpensive VR headset that you slide your phone into,” MacDonald said. “That might be something, but, then again, how many of those 10,000 are actually going to take it out of the box and go through the steps and set it up?

“It’s a good idea, I just don’t know how many people would actually use it.”

Re said he hasn’t produced any VR yearling videos for clients, yet, part because some farms were hesitant to, “give people another reason not to come” to the farm. But, in the midst of a pandemic, some people may not feel comfortable coming.

“For the big farms, I understand their hesitation in years past, but I really feel like some of these smaller farms could greatly benefit from it.”

“If you’re planning on spending several hundred thousand dollars at a sale, chances are you’re still going to go to the farm and have a look at the horse,” MacDonald said. “I don’t think you’ll get too many wanting to spend hundreds of thousands of dollars on a horse that they haven’t physically seen.

“But, you know, it’s all those other horses that make up the sale that people aren’t spending hundreds of thousands of dollars on the horse and they don’t go to the farm to see it and maybe they don’t even go to the sale anymore and see it. They just look at it, whether it’s on a regular video or a VR video. Those other horses that aren’t the sale toppers, they get sold, too, and people want to see all of the footage on them.”

NOT A NEW TECHNOLOGY

Re said he’s been interested in Virtual Reality technology ever since he got his first headset around 1991.

“Even though it’s more widespread now, it still has that ‘you’ve got to be a techie’ feel about it. It’s not something that an everyday guy can just put on, but I feel like when I do these training videos that it’s going to put people more at ease to try it,” Re said, adding VR technology is also improving dramatically.

“I’d say within two years, the headsets that are close to the resolution of our eyes are coming. Right now, I would say, they are 10 times better than they were three years ago, but it’s still not as crystal clear as if you were right there,” he said. “In two years, the headsets are going to be there where it’s like you won’t tell it apart from real life.”

VR also could have applications in the horse racing business beyond yearlings.

MacDonald said he’s tested the technology during races by putting a camera on drivers’ helmets or sulkies.

“I did it last year for a couple of races. We did it with (my brother) James (MacDonald) in the Battle of Waterloo elimination… It was a 360-degree camera so you saw him wherever he was.”

MacDonald said he sees the day when a number of drivers are wearing VR cameras and viewers could watch the race from a huge number of up-close angles.

“That day may not be that far off. Technology is advancing rapidly,” MacDonald said.

Re agreed that VR would be a terrific way to present harness racing.

“It’s a great technology for the races and I’ve seen that the thoroughbred people have really done it right and the standardbreds have taken a crack at it a couple of years ago and they just don’t have the right mix of equipment to get that set up,” Re said. “I really picture people watching the races wearing a headset and riding along with whichever horse that they want to follow and it’s a phenomenal view of the race.”

Best known in the gaming world, VR also has the ability to give viewers an immersive experience with far-away places — another benefit during a pandemic with travel restricted.

“If you look at tourism, with VR you can look at Egypt and it’s like you’re standing right there. It’s phenomenal,” Re said.

He can well imagine how the technology could allow a horse buyer to sit at home and do a thorough virtual inspection of horses from around the world.