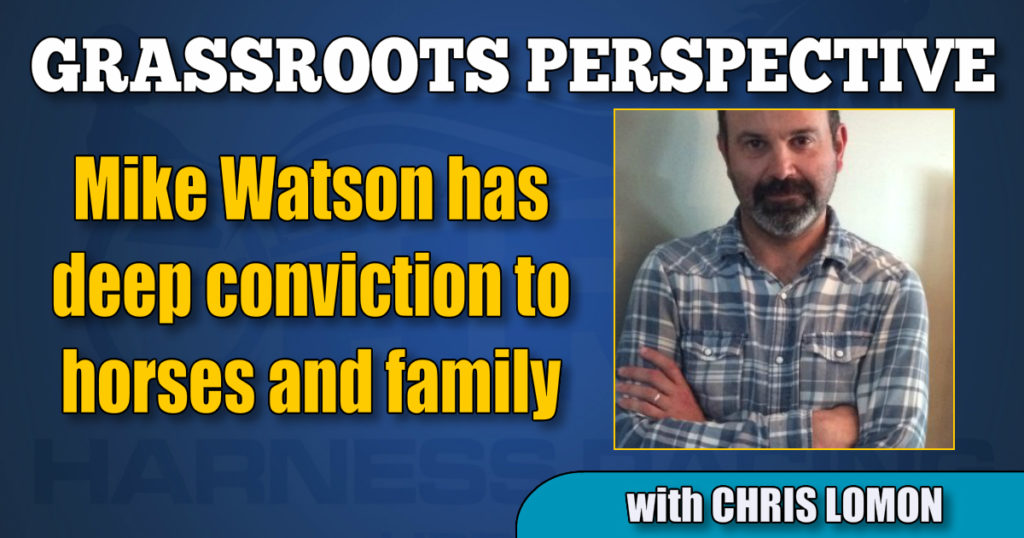 Mike Watson has deep conviction to horses and family 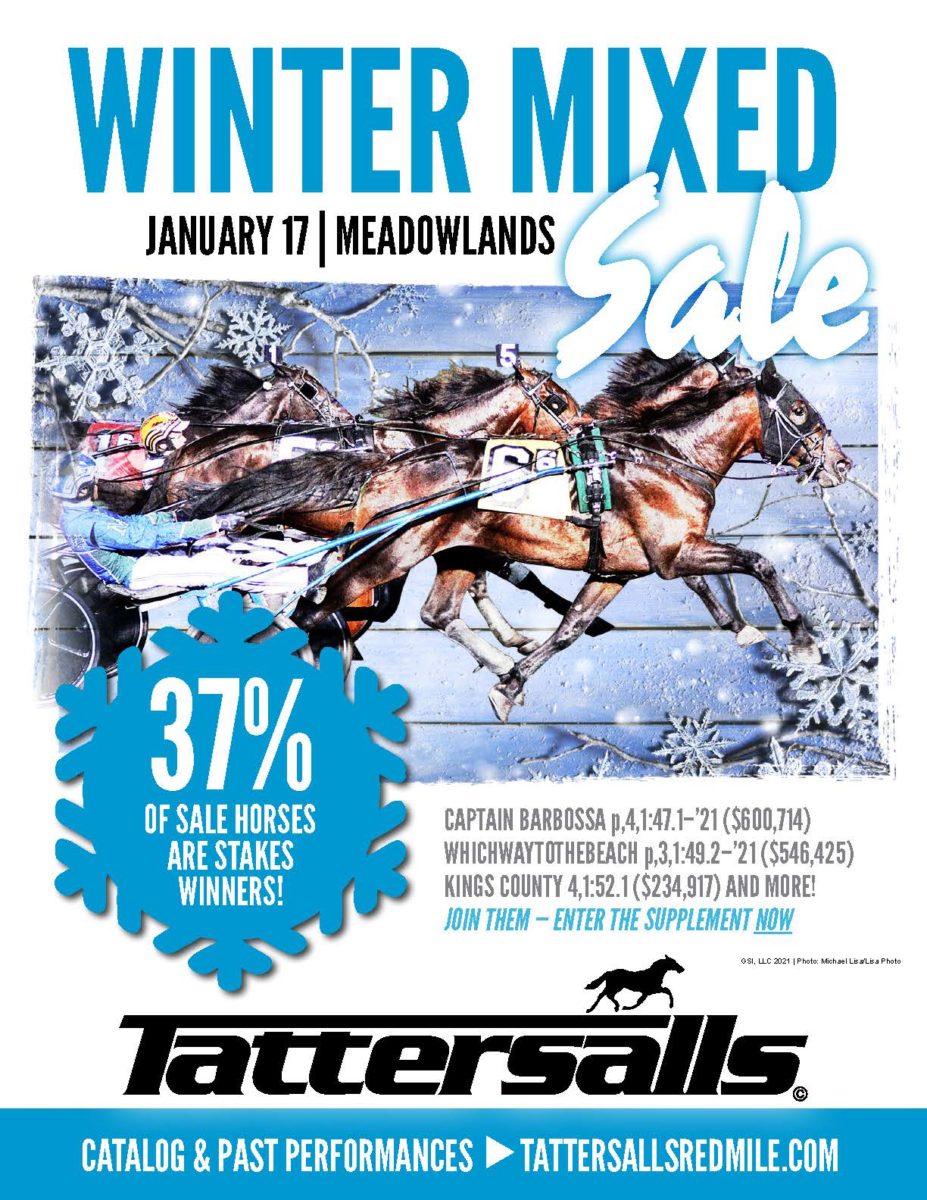 It didn’t take Mike Watson long to realize that horse stalls, not office walls, was his true calling.

Soon after he completed high school, the opportunity to work alongside his grandfather, Curt Watson, and father, Curt Sr., presented itself to the Michigan teenager.

Courtesy Mike Watson | The veteran trainer said he is blessed to have spent his life with horses.

“I remember that my father and grandfather, who worked for a company called Centri-Spray Corp, wanted me to come work there with them,” said Watson. “I worked there for about six months and then one day I said, ‘No way. I’m not doing this.’ And I was out the door.”

It wasn’t about what he didn’t want to do for a living. Instead, it was about the one thing which he felt he had the strongest connection.

Watson often thought about what he felt was his career calling during that short time at Centri-Spray Corp, and even more so on the day he tendered his resignation.

“We’ve had horses since were little kids. My grandfather had quarter horses and thoroughbreds. The standardbreds, my uncle – my mother’s brother – ended up buying my brother and I one at a sale in Michigan. I was probably 11 and my brother [also, Curt] was 13 or 14. That’s how we started with the first one. His name was Mischief Mark.”

A bay son of Boxer Hanover, the pacer, born in 1967, delivered the brothers their first glimpse of life at the racetrack.

“Two bowed tendons, but we had a good time with him,” recalled Mike. “I have to say that I’ve had a pretty good time in this business. I can’t complain.”

Looking at his stat sheet tells you why he wouldn’t.

Starting his training career in 1982, the affable horseman has racked up over 2,500 wins since that time.

Based in Wind Gap, PA, a town that’s found about a one-and-a-half hour drive northeast of Philadelphia, Watson continues to fare well in the Keystone State.

Although the COVID-19 pandemic has wreaked havoc on his current campaign, he hasn’t let the tough times diffuse his enthusiasm for the sport.

“At the time that the pandemic happened, I had 25 horses. So, I had to make a decision on what to do with them all when racing shut down. I took about half of them and turned them out for a couple of weeks, brought them back in, then turned the others out for a couple of weeks. I had to make the decision as to who to leave out for a while and who to keep going with. That’s pretty much how I did it. Now, they’re all in. Most of them are racing, but I still need to qualify 10 of them.”

Even during the temporary pause to live racing in Pennsylvania and across North America, Watson, who has recorded nine seasons of 100-plus wins, remained committed to his craft, and to an industry that he still has a great fondness for.

What keeps him coming back every day?

“I love it. I love the horses. I love the freedom. Each morning you walk into the barn and see the horses, see all of their different personalities… it’s a great feeling. I really enjoy being around the horses and spending time with them. And it never gets old for me.”

Watson has been able to share his affinity for standardbreds with his two daughters, Hillary, and Kailee.

The siblings have worked alongside their father for several years.

“Hillary [28] and Kailee [26] ran the barn,” said Watson, who won a career-best 134 races in 2001, coming close to matching the number when he tallied 128 victories in 2014. “For the last 15 years, they’ve been in the barn. Actually, they’ve been around the barn since they were babies. Now, they have children of their own. Hillary has a son, Lane, and Kailee has a daughter, Nora. My daughters, they’ve always enjoyed being around the horses. It’s nice to see their children here now.”

Family, more specifically, making time for Kathy, his wife of 29 years, and for young children, was a challenge for Watson early on his career.

It’s far less of an issue these days.

“This is a tough business to be in. I always tried to be around for them because I’ve seen what it can be like for kids who have parents in horse racing. This sport takes up a lot of time and there’s always something that has to be done. You can tell your wife you’ll be home in 20 minutes and three hours later, you’re still not there. It was a little tough. There were definitely some tough times when the kids were small, but we worked through it. For me, racing should be a family affair. My kids, they love these horses. So do I. Hopefully, the grandchildren do too.”

Beyond hard work, skill and the occasional good fortune, Watson points to one particular reason for his enduring success.

“You have to have good owners, owners that will buy good horses. They’ve come and gone over the years, but I’ve been very fortunate to have had such great owners in my nearly 40 years in racing. My ex-brother-in-law, Cliff Grundy, I’ve had horses with him for 30-plus years. He buys horses left and right. It’s worked out for well for me because he likes to claim horses.”

While Watson shies away from talking about his own accomplishments, the numbers, impressive ones, speak for themselves.

After a 74-win campaign in 2019, the veteran trainer has managed to hold his own this year as he works to get his stable of 25 horses into full gear.

With plenty to look forward to, don’t expect Watson to contemplate retirement any time soon.

Not when he’s still at the top of his game.

“I like it here in Pennsylvania. It’s tough racing, but we get by pretty well. I doubt if [retirement is] on the radar. Everybody says that. Who in this business ever gets out of it? Some do, but not too many. I’ve seen good times and bad times, but mostly, it’s been good times. I guess you could say I’m a die-hard.”