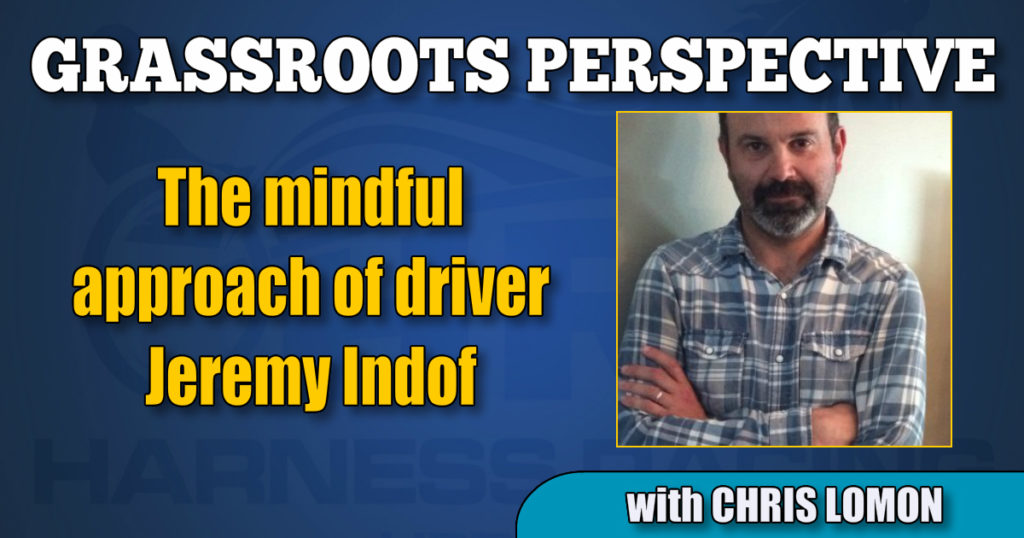 Whether he’s on the green, on the water or on the racetrack, Jeremy Indof looks to the same mindset in his quest for success.

Admittedly, he won’t ever be a fixture on the PGA Tour, and he won’t land a career as a professional fisherman, but it doesn’t stop the 23-year-old standardbred driver from enjoying a pair of pursuits outside of his time spent in the race bike.

Known as “Catfish” in Pennsylvania racing circles, the reinsman sees one particular similarity between the three staples in his life.

“For whatever you are doing, whether it’s driving, golfing or fishing, you have to use your mind first and foremost,” said Indof, who was born and still resides in Belle Vernon, a 50-minute drive southeast of Pittsburgh. “Skill is one thing, but using your head to read situations and react the right way, that’s what can really make the difference between being successful or not.”

Like the time he had to opt for either a post-secondary life or a spot in the post parade.

“My dad [Jeffrey] trained horses, and it was something I always wanted to do, but I wasn’t really sure if I would or not,” said Indof. “I was applying to colleges and at the last minute, I thought I’d go look for a full-time job at the racetrack, to see if I could get in.”

He got his answer soon after the search began.

“I was lucky enough to meet Dirk Simpson, a horseman who moved to Pennsylvania from Illinois. As soon as I graduated high school, he hired me and within two years I got my trainer’s license and became his second trainer. That’s how I got my start. We did very well together. And it was Dirk who really helped me get my start as a driver.”

Launching his career in 2016, Indof recorded one win from a modest five starts in that rookie campaign.

“[Veteran drivers] Tony Hall and Dan Rawlings, they really helped coach me up to my first start. So did Brady Brown and Mike Wilder. They were all accepting of me and they helped me out of a lot. That means a tremendous amount to me. It makes you feel like you are one of them.”

Before live racing was put on pause due to COVID-19 this spring, he had accumulated 15 wins and earnings of $162,108.

His final trip to the winner’s circle, pre-shutdown, on March 13 at The Meadows, came with Western Tyrant, a 6-year-old son of Western Terror.

Now that live racing has resumed [June 15 marked the return at The Meadows], expect to see Indof, who piloted Leap For Gold, at 9-1, to victory in race seven on Monday, doing a little more-self promotion.

“The challenge for me is dealing with the ups and downs. You can have a good month and then a really bad one. It’s also hard to get work as a young driver. I think one thing I can do more of is to be more vocal with owners. Sometimes I go into a little bit of a mute mode, so I need to do a better job of getting myself out there,” he said.

He’s also certain to recall the words of advice he received early on in his career from a respected horseman.

When a race gets underway, look for Indof to do his best to grab a position in the top three before the field reaches the quarter-mile mark.

“A guy named Bill Bercury, after my second ever start, he told me, ‘Put yourself in position to be at least third and then the wins will come.’ I’ll tell you this – the more I reminded myself of that, the more the wins came. I’ve never forgotten that. I’m trying to find that happy medium where I’m little aggressive, but I’m also patient enough. You realize that it’s the little things you’ve learned along the way that add up to make a big difference in your career.”

Indof hopes it’s a blueprint that leads to personal-best numbers in 2020, despite an interruption to the campaign.

What would be a good year in his eyes?

“I would say if I could string together at least 50 wins for the rest of the year, that would make it a successful one in my mind. I’ve never had a 100-win season yet, and that is something I definitely want to achieve. I want to make the most of any opportunities that come my way. I want to reach that winner’s circle as much as possible. That’s always my goal.”

In the weeks leading up to the return of live racing, Indof maintained his competitive edge on fairways and fishing holes, a way to keep his mind sharp for when he sat in the sulky again.

“I’ve been doing a lot of bass fishing, trout fishing, and going after catfish, too. I don’t have a great fishing story to share from this year. But whenever I get one on the line, I don’t give up. I just keep my head about me and do whatever it takes to land it.”

Just like the catch driver does on the racetrack.

For Indof, a huge fan of the University of Texas football team, there is always another catfish to catch, birdie putt to sink, and winning race to chase.

“I’m just really glad to get back at it, to be racing again. Being a competitive person, you miss the things that give you that adrenaline rush.”