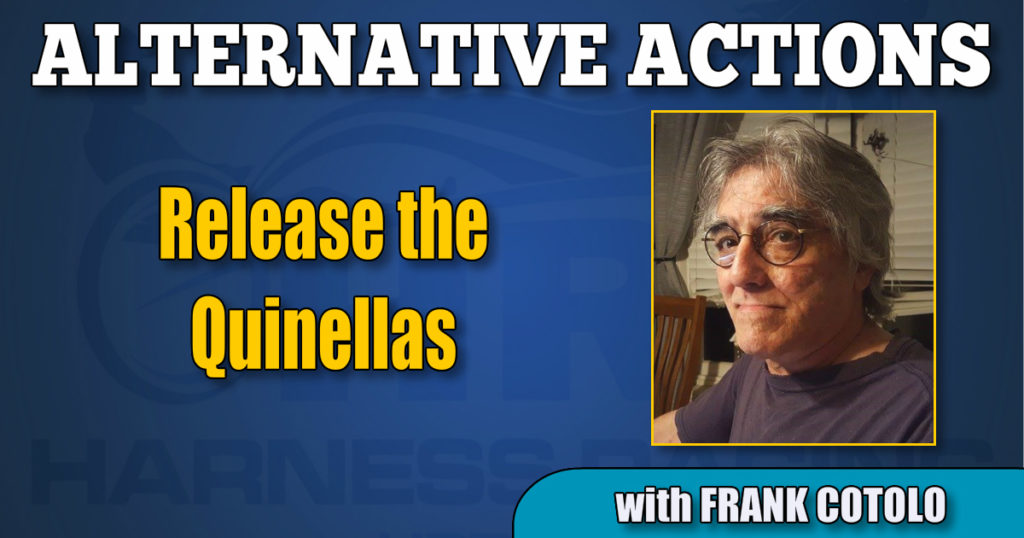 What is the reason for racetracks abandoning the Quinella? It seems absurd to me. I happen to think the Quinella is one of the best ideas ever created in the library of exotic wagers.

There are pari-mutuel tracks still offering the wager, but I cannot find it available at any North American harness raceway. Why? Last I heard on the subject, the Quinella is “unpopular with bettors.” Why? The general opinion, though I have not seen any data on the subject, is because it pays so little—and what’s exotic about that?

I should not assume all readers of Alternative Actions (AA) are acquainted with a Quinella bet, so, briefly: a Quinella is sort of an instant exacta box. That is, you bet on two horses to come in first and or second, but not in the exact (or exacta) order. With a Quinella you cash as long as your pair finishes first and second either way. There are other ways of playing Quinellas, but let’s look at its basics, using only a pair of horses. A bettor likes the 1 and the 8. The 1 wins and the 8 comes in second — the bettor cashes. The win comes in with the 8 on top and the 1 finishes second — the bettor cashes.

Generally, Quinellas pay half of what an exacta pays. Some players see that as a penalty for being able to cash without calling an exact finish. There is, though, nothing unfair about that, is there? I do not recall any experience in all of my years playing pari-mutuel races when a bettor complained about cashing any wager, no less one that paid around half of another wager. Indeed, Quinellas have just gotten bad press, being the little brother of the almighty exacta.

For decades, the Quinella and exacta had a base price of $2 each. Professional and novice bettors played them. In fact, I knew cunning players that found ways to sensationalize on specific incidents when a Quinella paid more than a cold exacta, a situation that may occur when a short-priced horse wins and a longshot finishes second. The Quinella may pay much more than half of the exacta. But all in all, there is no documentation of tears accompanying a person cashing a Quinella.

These days, exactas have lower base prices than ever. Tracks offer 50-cent and $1 exactas. Of course the lower the base the lower the payoff, but no one seems to complain about that. Why? Because bettors like one thing more than mostly any other thing and that is cashing bets.

This is one reason I urge tracks to “Release the Quinellas!”

That’s just one promotional cry a track could use in a campaign centered on bringing back the Quinella. There is no reason to give a reason where the Quinella has been or to add any explanation for its return. The promotion is all about the greatness of its return.

“It’s Quinella-Comeback Time!” is another slogan to express the excitement of the Quinella’s return.

“Quinellas — two bets for the price of one that could have you cashing twice as much.”

As for the price of one Quinella, there is a way to elevate its status to a premium wager — make ’em pay more to get more.

Without comparing the 2020 Quinella to the Quinella’s $2 grandfather, make the base price, for instance, $5. Then, a winning $5 Quinella would always pay more than a $2 exacta, while always paying a lot more than a 50-cent or dollar exacta.

Promoting Quinellas as a new, fresh idea is not a scam, because its incarnation is new; and for many fans, after all, it is a fresh idea. I understand that even as a new, fresh wager, the Quinella cannot compete with the huge payoffs of carryover “Pick” wagers or humungous Hi-5 pots, but it is important to emphasize that Quinellas translate into cashing more tickets.

The psychological impact of cashing tickets is a positive reinforcement for bettors. The act itself keeps bettors happy, even when facing a losing session. Track administrations need to understand and take advantage of content bettors. These are the players that stay happy because they are playing and they are happily playing because they cash tickets. And what type of exotic bet other than a Quinella is more likely to produce a cashable ticket?

Create specific programs where the track emphasizes the new bet — like a Profit Quinella Night. And how about while there is no on-track attendance, the promo is: “You’re stuck at home, so play QUARANTINE QUINELLAS” … and so onThe $5 Quinella base price is a gift; it’s a delicious alternative to how most players attempt to hit any other exotic wager.

The $5 Quinella is a two-way, one-way wager, so to speak; one $5 bet that, even if you always played the top two race favorites, would reward players two ways: first, they would cash a ticket; second, they would not have the often humiliating experience of ripping a ticket to shreds.