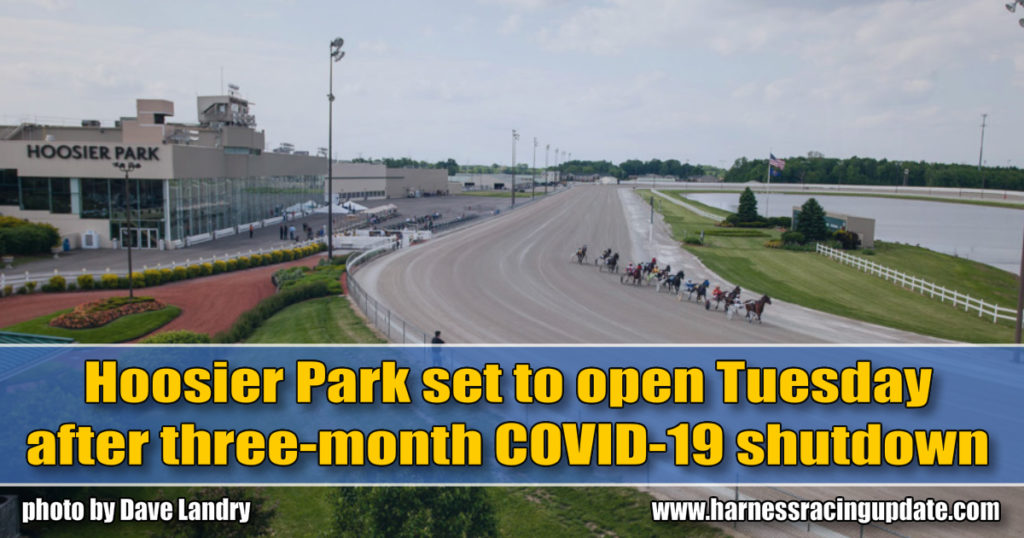 Eighty-two days after Harrah’s Hoosier Park was supposed to open its 2020, Tuesday’s opening program attracted 180 horses to the entry box and yielded a 14-race card.

In the midst of the COVID-19 pandemic, the world is learning to adapt to a new reality. The harness racing community has also adapted, and on Tuesday (June 16), Indiana horsemen will return to action at Harrah’s Hoosier Park 82 days after the 2020 meet was first slated to kick off. In the nearly three months between, a great deal has changed, but the excitement for a new season is as strong as ever.

“It’s just been a long time. Three months, it seems longer than that, actually. We are ready to go and we had a good response at the entry box. There seems to be a lot of excitement,” said Rick Moore, Hoosier Park’s general manager of racing. “The qualifiers have gone well. Everyone has adhered to the safety protocols. Now it’s time to raise the curtain. We will do that Tuesday night. We were expected to do that back at the end of March, but it wasn’t meant to be. Now, we’ll raise that curtain and put on a good show for the rest of the country.”

Hoosier Park will conduct a 111-day meet, down from the 160 days first scheduled before the racing shutdown. Moore said daily purses would be down roughly 20 per cent from last year. With casino revenue accounting for 85 per cent of purses and only two and one-half months of revenue banked before the state closed casino operations in mid-March, the initial approach is a conservative one. Tuesday’s card attracted 180 horses to the entry box and yielded a 14-race card. Wednesday’s program will feature 14 races, with 10 of the events offering nine or more starters. Spectators are restricted until the July 4 weekend as part of Governor Eric Holcomb’s “Back on Track Indiana” plan. It is new territory for Moore and his team.

“I’ve never put on a spectator-free race meet before, and I guess we’ll do that for a while. Not having people in the building will be very strange,” Moore said. “This is a whole new world and a new normal. You adapt and you go forward. I am just thankful that we are in a position that we can start the race meet. Everything is a little bit different at this time, but the good news is that racing is back Tuesday and horsemen are going to start earning money.”

To prepare for the meet and give trainers the opportunity to have horses ready for competition, the track hosted four qualifiers each week leading up to opening. Up to 90 horses could participate in a qualifying day, providing trainers flexibility as they put the finishing touches on trotters and pacers soon to line up behind the starting gate.

Owners had been resigned to the fact that they, like spectators, could not see horses racing in person until July 4. It was a particularly painful pill to swallow after the announcement casinos at Hoosier Park and Indiana Grand would reopen Monday morning, June 15 at half capacity. Due to the casino’s proximity to Hoosier Park’s apron and racing surface, slots players had more access than those invested in the industry. Late Friday, however, the Indiana Horse Racing Commission issued new guidelines at both tracks for licensed owners and trainers. Part of the statement reads:

“After receiving input from Indiana’s horsemen, and holding additional meetings with racetrack management, the following provisions are being provided to accommodate owners’ wishes to watch their horse race on race day. Beginning Monday, June 15, 2020 up to two owners per horse will be allowed on the racetrack backside, subject to the provisions of the reopening plan including (but not limited to) daily temperature checks., displayed license requirements, wearing the color-coded wristband, and mask usage.

Upon accessing the apron, licensed owners should proceed to the area designated by the racetrack to watch only the race that their horse is in. Owners allowed on the apron are also subject to the same reopening provisions as noted in the first paragraph above.

As previously mentioned, there is a limit of two owners per horse allowed. If an owner’s horse wins a race, the owner(s) may accompany the rest of the party to the winner’s circle. Owners must leave the apron after the completion of the race their horse is in. Example: If an owner has a horse in the first and third race, the owners must leave in between races. No individuals will be allowed to congregate in the designated areas.”

The fact remains, like other venues in North America, the return to racing at Hoosier Park is different. It must be different for the benefit of all. More protocols have been added, all done with safety at the forefront.

“We are taking every safety precaution we can think of. We have worked with the governor’s office, the racing commission and the Indiana Standardbred Association. When people come in, the first thing they are going to have to do is have their temperature taken. Assuming that it is within the normal boundaries, they will get a wristband for that day,” said Moore. “If they don’t have a mask, we’ll give them a mask, and they’ll be on their way. We do insist that they wear a mask at all times while in public, which is different, but necessary in this day and age. The virus has not gone away; I think we all know that. We have to take every precaution to make sure we don’t transmit it to one another.”

Moore also explained that once Hoosier Park opens to spectators, social distancing would be a priority, with mutuel clerks spaced at every other terminal, no buffet as a dining option, and guests seated at every other table in the Homestretch Steakhouse and clubhouse dining.

Nominations to the stakes that make up Hoosier Park’s Championship Meet are strong, and Moore is excited for a season that includes a second stint as host of the Breeders Crown. He said Hoosier Park is planning big things for the fall card headlined by the Caesars Trotting Classic, billing it as a Breeders Crown preview. The Dan Patch Stakes, less than two months away, will also be a focal point.

“The response on nominations has been phenomenal this year. We want to make the Caesars Trotting Classic into a huge stakes night. We’re going to blow that night out,” he said. “I’m also expecting we’ll have a tremendous Dan Patch this year.”

Indiana horsemen have waited three months for a chance to get the 2020 season underway, all the while adapting to the new normal created by the pandemic. The wait is finally over.