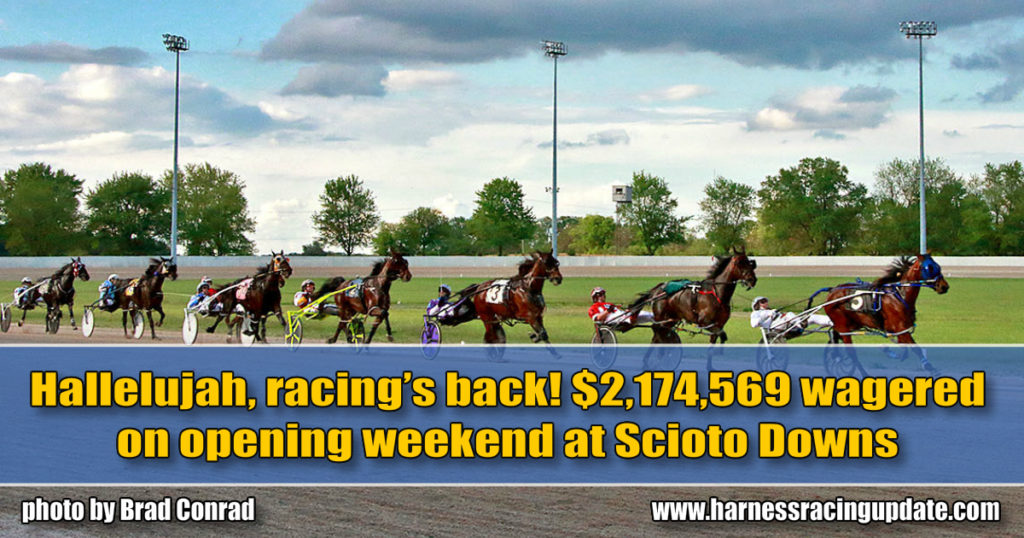 All eyes were on Scioto Downs as harness racing finally returned Friday and Saturday. Driver Chris Page and trainer Ron Burke dominated opening weekend in which $2,174,569, total, was wagering on the two cards — $1,054,294 on Friday and $1,120,275 on Saturday.

In the spring of 1959, Charlie Hill opened Scioto Downs to replace the undersized Hilliard Raceway. Shortly after the opening the south Columbus track was tabbed as “Ohio’s Showplace of Racing.”

More than 60 years later, all the eyes in the harness racing world were back on Scioto Downs as it was the only harness track racing in North America, playing host to the first harness action since the COVID-19 pandemic forced CalExpo to close on March 31. The fans wagered $1,054,294 on the 12-race Friday night card. $1,120,275 was wagered on Saturday’s 12 races for a two-day handle of $2,174,569.

Brad Conrad | The return of harness racing was positively heavenly Friday at Scioto Downs, the first North American standardbred track to re-open after the COVID-19 shutdown.

Friday night, the long wait was over with an action packed $9,000 claiming optional event for filly and mare pacers in the first race.

The Dragon Again mare won for the third time in nine 2020 starts for the Burke Racing Stable and Weaver Bruscemi.

“I can’t take all of the credit,” said Page. “With Ronnie Burke, I have a great support system with those guys. The grooms are working their tails off to make sure their horses are tight and ready to go. It’s kind of like the (Burke Stable) hasn’t missed a beat.”

When the field of six was sent on their way, St Lads Gidget (Aaron Merriman) protected his rail position and set the fractions of :26.4, :55.2 and 1:23.1. Golden Paradise (Trace Tetrick) made a first over move, providing the necessary cover for the eventual winner.

Page tipped Rosemary Rose off the cover and looked to be clear, but had to survive the late rally of Sally Fletcher A, who came from last and was a scant nose short.

Rosemary Rose scored for the 31sttime in her career. The 6-year-old Foreclosure N mare is campaigned by Burke Racing Stable, Jason Melillo and Weaver Bruscemi.

Friday night’s co-feature was the $18,000 open trot that featured a dead-heat between Peggy Sue (Brady Galliers) and Eye Ofa Tiger As (Elliott Deaton) in 1:55.1.

The winners benefited from breaks by a pair of Burke trainees, Dylan The Great and the heavy favorite Workingonbroadway.

“Oh my gosh, how do you kill two birds with one stone?” asked Page. “(Ronnie) had two horses (break). It was one of those freak things that happen.

“(Workingonbroadway) got a little hot on me. Tonight he was really fired up. I should have kept him quiet a little more. It was user error.”

On Saturday evening, My Hero Ron (Aaron Merriman) won the $18,000 open pace going gate-to-wire in 1:50.
Gd Western Joe (Chris Page) and Geraldo (Kayne Kaufman) completed the trifecta.
The 8-year-old gelded son of Well Said is owned by Brian Wilt and conditioned by Danny Dubeansky. With the win, My Hero Ron is just $337 short of the magical million-dollar mark with career earnings of $999,667.

Despite being shut out on the opening night card, driver Brett Miller and trainer Virgil Morgan, Jr. teamed up with a pair of wins on Saturday.

Page is optimistic for a great 2020 season personally and at the Columbus oval.

“I am very fortunate. I have some very nice 3-year-old Ohio breds – Elver Hanover, Looksgoodinaromper and It’s Academic.

“The track was almost perfect. They had the Coon Brothers (Greg and Dan Coon) come in and work on it. It was fast tonight and I predict that the open horses will go in sub (1):50 each week.”

The two nights of racing capped off a wild week in Ohio.

On Thursday, May 14, Governor Mike DeWine and the Ohio State Racing Commission (OSRC) gave the horsepeople permission to race with strict health guidelines and no spectators.

Live racing action returns to Scioto Downs on Memorial Day (May 25) with a 14 race card. A $20,000 guaranteed Pick 5 pool will be available. Free past performance pages for the full card are available at www.SciotoDowns.com.