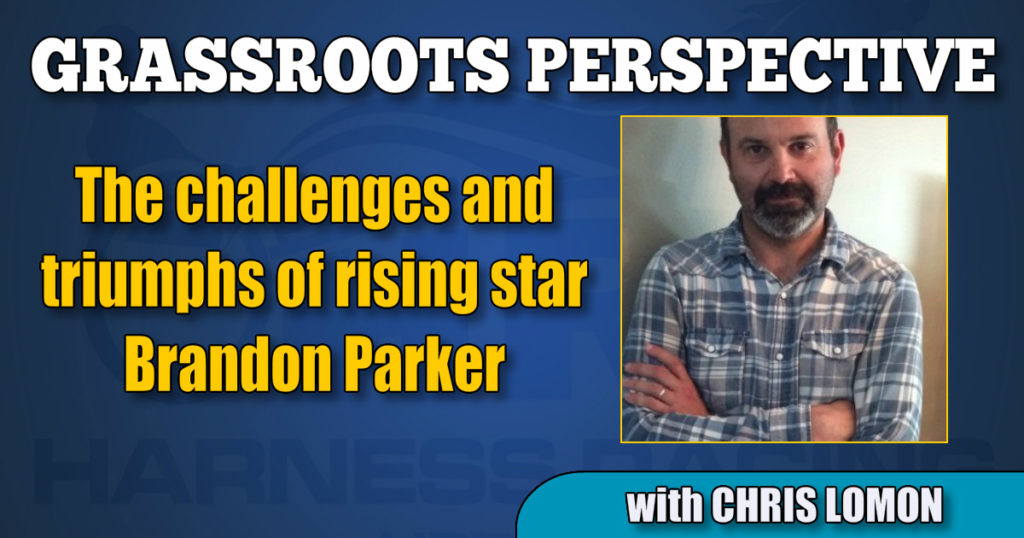 The challenges and triumphs of rising star Brandon Parker

“The toughest challenge?” asks the standardbred driver from Monticello, NY, before he takes a short pause. “I would say mental illness.”

The 21-year-old rising standardbred star is a soft-spoken young man of few words. When he talks, he does so in a measured, thoughtful manner.

Not in an in-your-face, tell-it-like-it-is way. Instead, his candor comes across as earnest and amicable.

That openness yields a refreshing response to a query that can oftentimes elicit cliché answers.

“Dealing with depression and anxiety, taking medication every morning, speaking with a therapist, then focusing on the horse racing… it’s difficult, but I’m managing.”

Support comes from family and friends. Serenity is found in the sulky.

Parker is grateful to have both in his life.

“I get a huge amount of support from a lot of people. They make me look forward to the next day, and make me think, ‘What else can I do tomorrow to make them excited and happy about what I do?’”

Then there are the horses.

Well before his first pari-mutuel drive, a second-place finish with 25-1 shot Histoire Eternelle at Monticello on May 9, 2017, Parker had found his calling.

The son of standardbred driving legend Billy “Zeke” Parker, who recorded most of his 11,311 career wins at Monticello, felt a connection with pacers and trotters at a very early age.

At six, he started hanging around his father’s barn. He was jogging horses by the time he was 12. At 14, he began watching races – lots of them – and soon discovered he was destined for a life in the race bike.

He was named the 2017 Rising Star recipient by the Monticello-Goshen chapter of USHWA.

Since the recognition, he hasn’t slowed down a fraction.
In 2018, Parker won 57 races. The number jumped to 92 the following year.

Before the COVID-19 pandemic put a temporary halt to live racing across North America, he had won 47 races, and was well on pace to besting his career-best numbers from 2019.

“It was tough to have to stop, but you just kept the hope that we’d get back soon. I’ve been working at the track for my dad, and others. I’m making sure that I sit behind at least one horse a day, either jogging them, training them, or just putting them away. Being around the horses keeps my focus on them and how happy that makes me.”

On the final night before the call was made to press pause on live racing in New York, Parker won two of his seven drives at Monticello on March 12.

Both came with horses trained by his father.

“Winning for my dad never gets old. When I see his smile when I come back to the paddock, it feels like the greatest accomplishment.”

The younger Parker is now looking to pick up where he left off.

“That’s what I’m trying to do. I don’t want this to be a change in fortune from where we stopped. I want to get back to where I was and keep on improving.”

He hasn’t forgotten the words his father shared with him about the craft.

“One thing that has stuck was my dad telling me, ‘If you’re not learning, you’re doing something wrong.’ For me, it doesn’t matter if you’re a 20-year-old driver or a 50-year-old driver, there is always something to learn. Everyone does things differently, but you have to keep an open mind in this business. My goal is to always keep improving.”

Parker, who has also had success working for accomplished horseman Larry Stahlbaum, repeats a particular focal point in his approach as a key to early successes.

“It’s just keeping that open mind. I work for a lot of different people, and I drive alongside great drivers every day. I watch what they do, and when the races are over, I go home and watch replays. I study that film and go over what I did that day.”

A critical eye is tempered by an ability to see the good in what he accomplishes.

“Most of the things I look for in myself is patience and right timing… where I didn’t over drive. I waited and I made the right moves. I’ve driven in races where I thought I drove well and finished second. I go home and watch the replay and then I can pick out three different times that I should have done this or that, or shouldn’t have done this or that. I try to study it a lot.”

Attention to detail, nearly daily homework, and natural talent holding the reins has added up to an impressive start to Parker’s career.

He’s eager to tack on more victories to the 241 he’s accumulated to date.

“Even with the way racing has been affected by the coronavirus, I want to go past the number of wins I had last year. That’s my goal.”

Beyond that life on the racetrack, Parker is embracing the time he gets to spend with family and friends.

He plays basketball. He listens to music. He draws. Last spring, he was on a co-ed softball team.

And if he ever needs a reminder of the many people he has in his corner, Parker knows all it takes is a click, text, call or conversation.

“I’m on social media a lot, and I couldn’t appreciate my fans, my friends and my family any more than I do. They always make me look forward to tomorrow.”

As do the horses.

“To sit behind an amazing creature like that, I’m lucky to be able to do this for a living. Sometimes I forget I get paid to do it. That’s when you know you love what you do. And I do.”