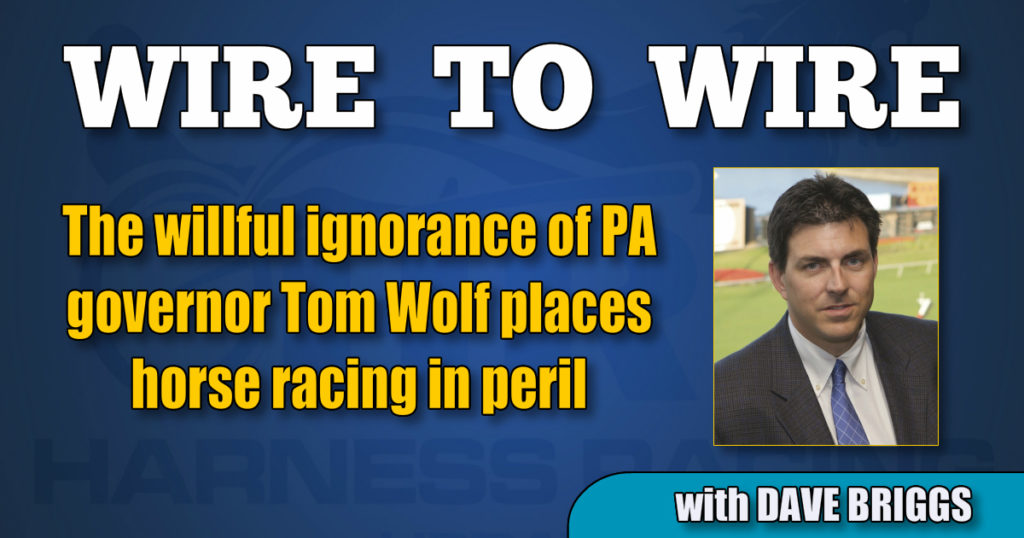 Both the governor’s intransigence on returning to racing and his attempts to raid its chief form of funding sharply raises concerns of impending doom in one of the world’s most successful standardbred jurisdictions.

a. A person who hates horse racing?

b. A person who is poor at economics?

c. A person who has trouble understanding the COVID-19 advice of medical professionals when it comes to activities that can be safely done outdoors if proper protocols are followed?

d. A person incapable, or unwilling, to look at the proof from other jurisdictions that horse racing can be conducted safely — and wildly successfully — without spectators?

e. A person who places his political agenda ahead of the livelihoods of more than 7,000 of his citizens that rely directly on horse racing to make a living?

f. All of the above

One can’t be 100 per cent certain, but it seems pretty clear the best answer is “f. All of the above” after Wolf released a letter on Tuesday (May 12) (full story here) stating horse racing would be among the last things to re-open in the state following the COVID-19 lockdown.

“We foresee horse racing reopening when counties enter the green phase, like other entertainment (casinos, theaters, etc),” Wolf wrote in response to a letter from his own appointed secretary of agriculture, Russell Redding, who is also chair of the Pennsylvania State Horse Racing Commission. Redding wrote to the governor on May 1 asking Wolf to consider allowing racing to resume with safety protocols, including no spectators. Tracks then submitted plans for reopening to the racing commission.

Wolf’s rebuke of that request, at best, shows his ignorance on many fronts and, at worst, certainly smells worse than a manure pile in a heat wave.

Remember, this is a governor who in February released a 2020-21 budget proposal to try to raid $204 million from the Race Horse Development Trust Fund (RHDTF) to launch a new scholarship program to support students attending one of the 14 state-owned universities (full story here).

Helping students offset huge debt is an admirable goal, of course, but not when one has to rob Peter to pay Paul and the plan calls for lowering student debt by throwing others out of work and onto the public dole.

The RHDTF receives about $250 million annually from casino revenue, meaning Wolf was trying to illegally divert nearly 82 per cent of that funding despite the fact that in 2017 the state’s legislature passed Act 42 placing the RHDTF in a trust fund allocated as “not funds of the Commonwealth” and legally declared as funds the “Commonwealth shall not be rightfully entitled.”

Though it’s still unknown how his budget proposal will fare, especially against strong opposition in the Republican-controlled legislature (Wolf is a Democrat), it seems odd that the governor of a state that has long had agriculture at or near the top of its leading industries, doesn’t understand, or at least appreciate, that horse racing is one of the state’s most successful agricultural sectors. Like it or not, that means jobs and economic activity in a time when states can ill afford to pass on either.

COVID-19 has proven deadly, both in terms of lives and livelihoods. One wonders why Wolf wants to make things even worse for his state’s economy and a horse racing industry already reeling from the pandemic. After all, horse racing could safely operate under strict protocols as it has done in many jurisdictions in the United States.

The industry also drives much-needed revenue for the state — it has an economic impact of some $527 million annually according to a 2018 study. Thanks to a successful partnership between casinos and horse racing, Pennsylvania, particularly on the standardbred side, is one of the most successful jurisdictions in the world — if not the most successful.

What governor wouldn’t take pride in having an industry that is a world leader?

What governor willingly looks at a strong revenue generator for the state and says, “No, thanks”?

Even if we give him the benefit of the doubt that he’s erring on the side of an abundance of caution not to open too soon to save lives, surely he is capable of understanding not a single reported COVID-19 case has come out of any of the racetracks that remained open or have recently re-opened. Surely, he can see other states and provinces giving horse racing the green light to return to action ahead of many industries. Surely, he can understand that operating an outdoor sport without spectators and grandstand staff is completely different than opening a casino or movie theater where people are not only indoors but also difficult to separate.

After all, Redding did clearly explain much of this in his initial letter requesting a return to racing.

As well, the Pennsylvania Equine Coalition has done excellent work — much better than most —lobbying and educating politicians about the importance of the horse racing industry, the number of jobs it supports and the economic activity it generates.

So, it’s not as if Wolf hasn’t been told.

Which leaves the following questions:

And, perhaps most egregious: Is he employing both willful ignorance and the extraordinary powers granted to him in a state of emergency to damage the horse racing industry to the point it collapses, allowing him to redirect the money to a cause he finds more politically advantageous?

You be the judge.