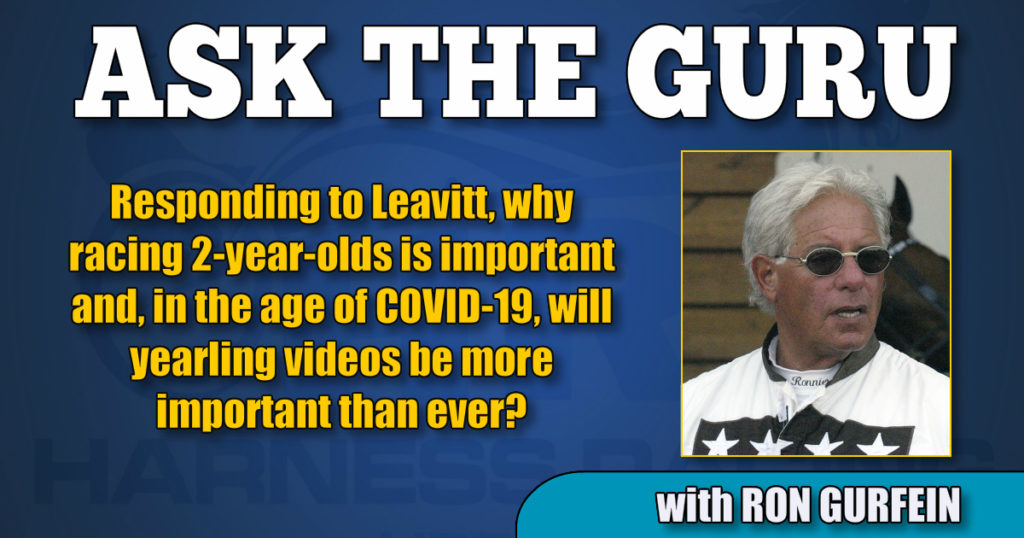 Responding to Leavitt, why racing 2-year-olds is important and, in the age of COVID-19, will yearling videos be more important than ever?

Tidbits: There is an old saying that all farm managers are frustrated horse trainers. I am hoping that is the reason for the personal attack on me by Alan Leavitt. It upsets me that a Harvard graduate is not a fan of my column. I say that because if he had been a follower of Ask The Guru he would know that the column is not all about horses, but I answer questions as well as editorialize on anything I think my readers would appreciate. His letter to HRU (2020-05-10 Feedback) seems written in a moment Alan thought it was wrong of me to disagree with his belief that it is impossible for us to have a racing commissioner. Anything is possible, and his attitude is a perfect example of the laissez faire attitude in the leaders of the state commissions that have created the disaster we find ourselves in.

To prove my point think of all the bad news that has filled the harness racing publications in the recent past. The incident at Pocono with Ray and DEXTER, the Cobalt positives in various places, the misplaced positives in Pennsylvania. Name one person that has been ruled out after all that. No one.

While on the subject, Daryl Bier made a very nice remark about me on Facebook and asked why track management and racing commissions haven’t taken advantage of my experience? The answer is simple: Management at some tracks definitely ask me things. As for commissions, most know me well and would be afraid to hear my responses.

To those of you missing the beginning of the baseball season it looks like you are in for a long wait as spring training must resume prior to the first pitch. I saw Bob Costas do a piece on TV about the soon-to-be, very short season without fans. He made a great suggestion that baseball should try all the suggested innovations within the shortened season. Among the ideas he felt should be implemented was a timer between pitches when the bases are empty, an electronic balls and strikes unit to replace the umpire and starting extra-inning games with a runner on second base.

I really shouldn’t say this as I will put a hex on myself, but I have found one positive to life in the virus era. I can wear clothes I haven’t worn in a dozen years. When I stopped smoking, as most people do, I gained 20 lbs. I never throw out good clothes. I have sports jackets that are like new and are 40 years old.

In the new situation, I do little but read and write my column as well as binge watch TV series. Try A Village In France. It has an excellent seven seasons. The only minus is subtitles which I now read even in English because I cannot hear very well.

Back to my weight loss. It is around 14 lbs, just from not eating much. Unfortunately, I have lost all that weight eating pie, ice cream, watermelon, Italian salami, and blueberry muffins. Great diet.

Proves to me one thing we eat way too much. Can you imagine how much I would have lost eating salad and fruit?

I have gotten a lot of mail about the GOAT challenge and I must print one as it is from my humble and extremely knowledgeable accountant (services available) Peter Weisberg. Peter’s opinion, and I truly agree, is that Cam Fella was more relevant to the field of horses than most who were named to the event. I will not beat a dead horse so I will drop the discussion here and now.

Paul Richards asks: Your non-concern of racing 2-year-olds bothers me. Do you disagree with all the folks that think eliminating 2-year-olds is good for the sport?

This subject Is getting old and the only reason that I am answering it again is that a very interesting article came out last week on the famed veterinarian Dr. Larry Bramlage who stated that in his opinion it is better for the 2-year-old to race then not to. He says it is a scientific fact that the bone development in the racing 2-year-olds is much better than the unraced ones. It is documented that the longevity of the racing life of a horse that raced at 2 is longer and more productive than those that remaining on the shelf are and start racing at 3, 4 or later.

Add to this the terrible financial upheaval in our sport that I have discussed in previous columns and the verdict is no longer debatable.

Billy Bigler asks: Your friend Gordon Waterstone has been selected to be on the screening committee for the Hall of Fame do you have any suggestions for him?

I certainly do. I will not go into detail about the accomplishments of my choices because I believe that if you need to discuss what a person has done to be worthy of nomination than he or she shouldn’t be considered. If you look at your contemporaries that have been inducted you are fully aware of their accomplishments. Unfortunately I have way too many suggestions so I will update after my first choices have been elected (hopefully).

Frank “The Elder” and brother Gerald Antonacci, Per Eriksson, Ray Schnittker and Lucien Fontaine are my first suggestions.

Douglas Allen asks: Considering the health situation we find ourselves in, do you think it would be advantageous for the breeding farms to make more extensive videos of the horses this year?

I truly understand what you are getting at, but I do not think a video should be a selling point for a yearling. I think a video is a great tool for eliminating a horse, but not for buying one.

I started watching yearlings in the paddock at Dapple Gray Farm in the ‘60s. I learned early on that you can learn a lot about a colt in the field, but in person.

I have seen videos of horses that were amazing only to see them unable to hit the trot when I was standing in the paddock.

There are farms today that have Roman Polanski directing the video shoot. What you see is not always what you get.

Filming yearlings is a slow and tedious process and the editing is even more difficult.

To become confident of a seller, watch all their videos. When all of the horses are fast there is something wrong. No matter how good the stock is at any given farm at least 30 per cent of the videos should show a moderate speed.

You can use videos as a screening tool. I do it myself especially with colts that have questionable pedigree. But please remember nothing does more for your own buying confidence than seeing a colt perform exceptionally in the paddock.

Mel Owens asks: I have been reading your column on the topic of commissioners and or medication rules. How much do the powers that be really want that kind of accountability?

You answered your own question. The main problem we face every day is that they don’t want anything that in any way tends to upset the apple cart. I personally know many judges and commission members and for the most part they are very intelligent, well-meaning individuals. I think it’s their superiors that tie their hands.

Guys like Dave Magee and Dick DeSantis are my friends and I assure you no criminal activity will go unnoticed under their watch. No positive test will be thrown in the trash. But if men like that alert their bosses of a potential problem and then some attorney says it’s a slippery slope, what are they to do?

If there was a commissioner there would be plenty of “whistle blowers” and lots of changes made.

As for medication that is really a mess. Until there are uniform drug rules we remain paddling upstream, and what really exacerbates the problem is the fact that standardbreds and thoroughbreds in some domains fall under the same umbrella. In many jurisdictions, the runners rulings on Clenbuterol and Lasix will create a nuisance to our sport.

Andreas Jonsson asks: You trained a mare called Will Of A Woman. She is now the mother of a top colt and winner of four grade one events Aetos Kronos. He is trained by Jerry Riordan and co-owned by Jeffrey Snyder. What can you tell me about her?

Unfortunately, I have nothing good or bad to say about her. She was a Marvin Katz and Al Libfeld homebred that I broke and trained at 2. She was very nicely gaited, but also fairly slow. She was a decent sires stakes filly, but was non-competitive on the big stage. I told Marvin to breed her at three, but he wanted another opinion. She raced back the following year in another barn to no avail.

I am not surprised that she has a top colt as Katz and Libfeld have an exceptional collection of the finest breeding stock.

Tom Santoro asks: Would you buy a yearling knowing the sire came from a doping stable or would you just go by the bloodlines? What about a mare that came from one of those barns?

Fortunately, there have been very few trotting horse trainers that have been down that path. To be honest, the few times I have found myself in that situation I admit I refused to buy a foal from a mare with questionable connections.

As for stallions, I am not sure there is a trotting sire with that stigma.

Pacing horses are an entirely different story, but here again I have seen results so varied I would have to advise you to go with your gut feeling. I have seen good sires from known drug barns as well as bad ones. I have seen many bad sires from totally clean barns. Mr.Vic and Glidemaster are two that immediately come to mind.

Wayne Hutt asks: If you had a choice between an Italian trotter or French trotter to race in the United States which would you pick?

An impossible question to answer. I would like the fastest one.

Once a horse is racing, the discussion is not where he came from but what can he do. If you want to rephrase the question and ask if I was to buy a yearling I liked and had to select between those two countries which would I chose I would most likely lean to Italy as there is way more American blood there than in France. The French trotter is larger and built more for endurance. The Italians trotters have really impressed me of late in the Yonkers International.

If you asked me that question 40 years ago I would have said the exact opposite. I was in love with Une de Mai.

Thanks to all for your kind words. Please keep the questions coming in. It’s amazing how time flies. It’s been going on four years since I started this endeavor, and you input has become stronger every year. Have a wonderful week and please STAY SAFE.