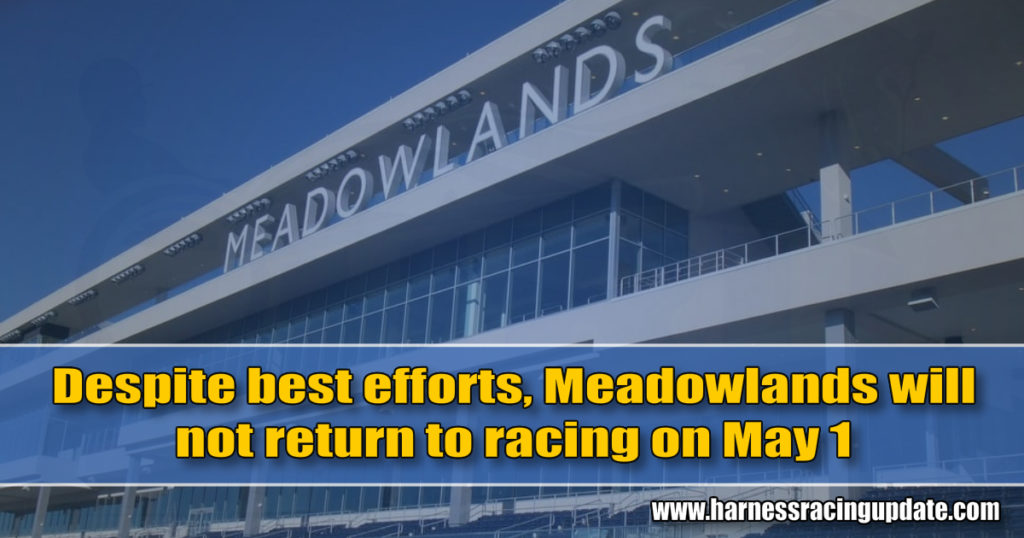 Despite best efforts, Meadowlands will not return to racing on May 1

To make up for lost dates, The Big M may race in the fall.

The goal of re-opening the Meadowlands on May 1 is no longer feasible, track owner Jeff Gural admitted earlier this week. Gural said there is now no timeline as to when the track would re-open, but he hopes some of the dates lost to the COVID-19 pandemic can be made up later this year.

In an April 8 press release, the Meadowlands set May 1 as a target date for re-opening. No official statement has been made since regarding when the track can start racing again and Gural declined to give a new date, adding “I hope we can race again sometime in May.”

“It’s up to the governor,” Gural said of New Jersey governor Phil Murphy. “We have a plan in place that we think will follow all the rules out there about the virus. But we can’t do anything until we get the governor’s blessing. We are waiting to get some guidance from his office. I have talked to people in the governor’s office and they are waiting for things to settle down before they make any decisions.”

New Jersey has been one of the states hit hardest by COVID-19. On Thursday, Murphy reported that the state had recorded 98,989 cases of COVID-19 and that there had been 5,368 deaths.

“Yes, this has been frustrating,” Gural said. “But it’s important to keep things in perspective. People are dying.”

The Meadowlands is scheduled to end its meet on Sept. 19, after which the track would play host to thoroughbred racing through Nov. 21. Harness racing would resume Nov. 27.

The thoroughbred meet was expected to include dirt racing for the first time since 2009, a reason why the meet was set to be longer than it had been in recent years. To be able to run on the dirt requires changing the track over, which is a considerable expense. Considering the economic climate, Gural doesn’t expect the thoroughbred interests to go ahead with plans to race at the Meadowlands in the fall, at least on the dirt. If the track is not converted, harness racing can continue without a stoppage.

“We would like to race in the fall,” Gural said. “I don’t think the thoroughbreds will race there on the dirt. We were originally going to switch over but I don’t think that’s going to happen in light of the crisis. We would run to make up some of the dates by racing right through in the fall. It’s common sense. Neither one of us has any money and it’s expensive to convert the track.”

Gural said that when racing resumes it is unlikely that there will be any major changes to the stakes schedule or to purses. The $200,000 Cutler Memorial is scheduled for May 16 and two stakes that are part of the Graduate Series are also scheduled to be held in May.

He is also waiting to find out when racing can resume at the two other tracks he owns, Tioga Downs and Vernon Downs, both of which are in New York. Vernon was scheduled to open April 17 and the Tioga meet was set to begin May 2. Like New Jersey, New York has been hard hit by the coronavirus and strict stay at home rules remain in place.

It appears that it may take longer for the two New York tracks to open than it will for the Meadowlands. Gural said that racing can’t resume at the two upstate New York tracks until the casinos are allowed to open.

“Once they give us the go-ahead to open the casinos, we will open the tracks,” he said. It’s just a question of whether they let us open the casinos or not. Without the casino revenue there is no money for purses.”

Because social distancing is particularly difficult in a casino environment, it doesn’t appear that the state’s casinos will be allowed to operate any time soon.