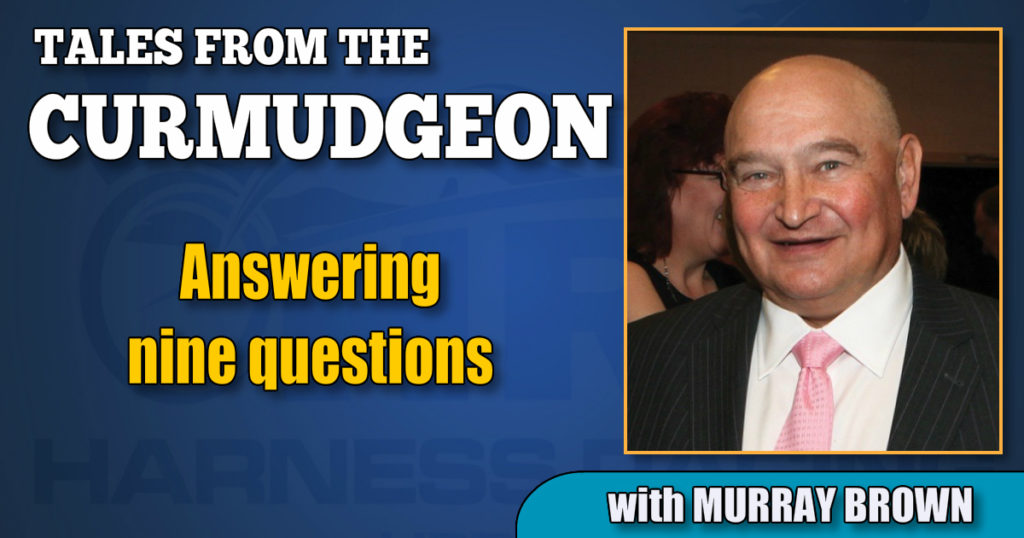 Thanks to a suggestion from a friend, I intend to occasionally use this space to profile people who have been great assets to the sport, but their stories both inside and outside of harness racing aren’t as well known.

Before I turn the questions on other people, I thought it was only fair that I be the first test subject.

How did you get into the business?

I was 15. Blue Bonnets Raceway used to allow people into the track free after the seventh race. I’d go with some friends and we’d share a $2 bet. The first bet I remember making by myself was on a horse named The Monarch C that Duncan MacTavish told me he thought he could win with. He did and I was hooked.

What made you decide that was what you wanted to do with the rest of your life?

I was at Richelieu Park on a summer’s Saturday evening. It might have the first year that the Canadian Juvenile Circuit for 2-year-old pacing fillies was contested. Each division had a filly sired by Adios, trained by Harold McKinley for the Armstrong Brothers in it. One of the fillies was Rosemary Frost. I forget the name of the other. Both fillies won. I asked myself why. From that point on I became a student of bloodlines. I subscribed toThe Harness Horse. Then I foundHoof Beats. I read both from cover to cover. My epiphany was finding that the USTA published a huge book called the Sires and Dams. Each February, I’d look forward to receiving it. I read it literally from cover to cover at least twice. There was a time when I could tell you the sire, dam and dam sire of at least 80 per cent of the mares in it. I thought I knew it all. Little did I know how much I didn’t know and how much I would never know.

What was your first job in the business?

I made pedigree charts of horses for people on a part-time basis while I was going to school. My first job of any consequence was with the Miron Brothers racing and breeding enterprise. Marcel Dostie, who was their head trainer and driver told Mr. Adrien Miron that there was this kid who hung around the racetrack who knew “everything about breeding”. The truth was that I knew more than those who were racing in the Montreal area at the time. Nevertheless, Mr. Miron listened to Marcel and hired me. The two years that I worked for them might have been the two best of my youth. My official title was as consultant. But it was more, a lot more. I’d travel with Marcel and usually Mr. Adrien to most of the biggest events in the sport. I met all of my idols — people with the name Haughton, Dancer, O’Brien, Sholty, Insko, Bell, Waples, Filion and numerous others.

What do you like the most about the business?

The first is, of course, the horse itself. As Mr. Churchill was fond of saying, “There is something about the outside of a horse that is good for the inside of a man.” I just loved them all, old pluggers, babies, mares, foals and especially 2-year-olds beginning their careers. The second is the people and the sense of camaraderie it has spawned. I’ve been fortunate enough to have met literally those from prince to pauper and everybody in between.

The sometimes well-earned terrible reputation that we have. As with most things in this life of ours, the reality is neither as bad as our reputation says it is, nor as good as pollyannas like me would like to think it is. The second thing is that so few people even know anything of our existence.

What has been your biggest thrill in the sport?

Being a part-owner with one of the finest people it has been my pleasure to have known “Mr. Ed”, Ed Mullinax, but most particularly with the filly Up Front Annika, the night she won the Goldsmith Maid at Woodbine. The filly was named after my granddaughter Annika and she and her dad John were in the winner’s circle celebrating with us.

Which person in the business has had the biggest effect on you?

Without a doubt John Simpson, Sr. He felt that I had more talent and ability than I in my wildest dreams would ever have believed I had. He was the closest thing to a father I ever had. My own father passed when I was two years old and I never knew him. Mr. Simpson was everything that most good fathers have been. He was fair, but also very capable of being tough. To those he liked, he was kind and generous. Trust me, you did not want him to not like you.

What was the dumbest thing you’ve ever done in the business?

It wasn’t so much something what I did, but rather something that I didn’t do. When Donato Hanover was a yearling, I loved him beyond all the others in our consignment. Some friends of mine bought him for $90,000. I am certain that if I wanted in, they would have allowed me to participate in his ownership. I was in the financial position where 10 percent for $9,000 would not have imposed any financial hardship on me. Instead my brain was hiding somewhere in my rear end. Less than a year later, I ended up buying less than one per cent of him for $50,000. I still ended up making money on the deal.

What was your favorite horse?

Without a doubt, Super Bowl. He was everything one would look for in a horse, handsome, smart, great disposition kind and a real character.