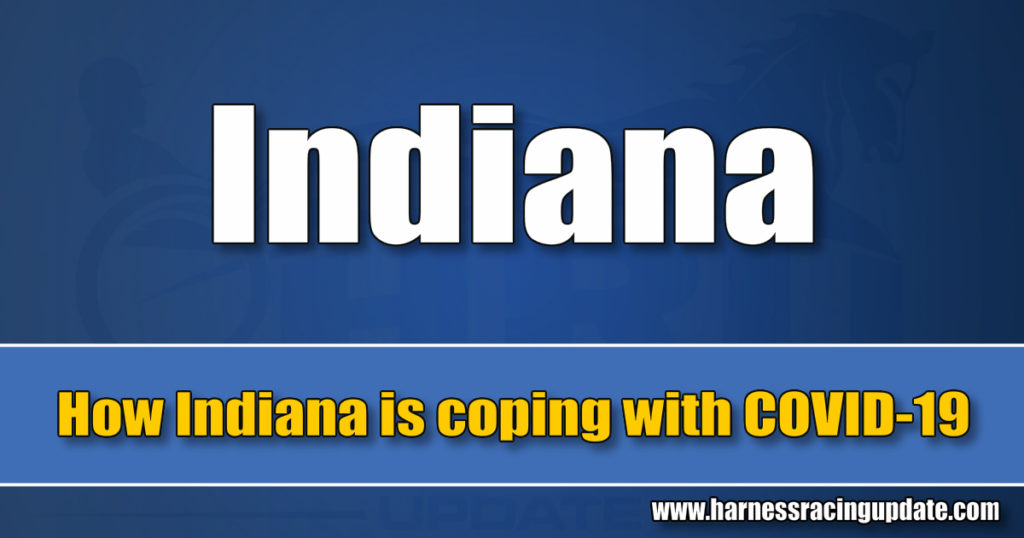 How Indiana is coping with COVID-19

This was supposed to be opening weekend at Hoosier Park until tracks and casinos were closed in the state.

Late March in Indiana is traditionally a time of excitement and optimism as a new racing season begins. Harrah’s Hoosier Park would have raised the curtain on the 2020 campaign Friday and Saturday. Instead of the sound of thundering hooves over the Anderson oval, there is now silence. The grandstand, Homestretch Clubhouse and apron are barren. The COVID-19 pandemic has shuttered racing in the Hoosier State before the first condition sheet was printed. Now, the industry awaits amid uncertainty.

“It is unprecedented. We’re all just trying to make the best decisions as we go,” said Jessica Barnes, director of racing and breed development at the Indiana Horse Racing Commission (IHRC). “Right now everybody is kind of in limbo because we’re all just waiting. You have the executive order out there that goes through the seventh. What happens after that, my guess is as good as yours. I have no idea.”

Two weeks ago the Indiana Gaming Commission closed Hoosier Park, Indiana Grand and casinos across the state for a 14-day period beginning Monday, March 16 and running through March 30. Less than a week later, Governor Eric Holcomb issued a “stay at home” order shutting down nonessential travel and businesses. The executive order runs through April 7.

The governor’s next moves will determine how much longer Hoosiers stay at home and racing continues in a holding pattern. Rick Moore, Hoosier Park’s general manager of racing, said that while it was the right decision to delay the opening, there will be excitement once the track kicks off live racing.

“Right now, it’s kind of an empty feeling, but you know it’s the right thing we are not racing. There is no precedent. There is no playbook. We’re all just taking it day by day.” Moore said. “Nonetheless, we were preparing to get off to a big start, and that will just have to be delayed at this point. There’s going to be a lot of pent up enthusiasm when we do open.”

Management were in the process of planning for the 160-day harness meet, which included a second go-round as Breeders Crown host. Moore said that Breeders Crown planning continues, but many of the final details for the track’s 2020 meet were put on hold with no official start in sight.

“We were in the final preparations. We were talking to TVG and Twin Spires about marketing promotions on their ADW sites,” he said. “Everything was at the three-quarter pole; we weren’t quite at the finish line yet. We had to put everything on hold. It came to a grinding halt.”

The reality is that the casinos at Hoosier Park and Indiana Grand are the lifeblood of the state racing industry, and the longer they are dormant, the greater damage to the bottom line. According to Barnes, casino revenue is deposited into stakeholder accounts on the 15th of the following month. On April 15, the first real impact will be felt as revenue from the month of March is received. With casinos operational for only 15 days, the expected revenue should be roughly half what a normal month would bring.

“In essence, with every month of shutdown, the breed development program is losing about $1.3 to $1.4 million in revenue,” she explained.

Last December, the racing commission adopted a breed development plan with nearly $13.3 million budgeted for racing, an increase of roughly $1 million from what was spent in 2019. Some of the changes included boosting Super Final purses an additional $50,000 to $250,000, increasing the Indiana Sired Fair Circuit finals to $25,000 each, and more purse money for late closers and mini-series. The increases were made knowing there would be new revenue from table games coming online beginning January 1. Barnes said conservative adjustments were made, leaving the door open to add further increases after a few months of table games revenue were realized. That conservative approach to the breed development program may help offset losses due to casino inactivity, but there are many factors at play.

“For every month we’re losing that money, we are good that we have some reserve built up. But, with that said, we were already utilizing some of that in anticipation of table game revenue,” Barnes said. “The biggest question is going to be how long are things shut down, and then how much of a recession are we going to see when things open back up. We’ll not only have the revenue that we lost, but we’ll also have the revenue we projected. If things decline quite a bit, then our projections are going to be off for the rest of the year.”

Tuesday the IHRC announced the postponement of nomination payments for some Indiana-sired late closers, as well as Indiana Sires Stakes and Indiana Sired Fair Circuit events for 2-year-olds, one month to May 15. That decision could result in fewer horses nominated, but that concern was secondary.

“When I talked to my board members, one of the things that made our decision was that we didn’t want people struggling to try to figure out how to buy groceries or make their stake payments,” said Barnes. “The downside is that we might not get as many horses staked. Many people may have figured out by May 15 that they don’t have a sires stakes horse. To us, that potential loss was worth it just to try to help the horsemen in this situation.”

Joe Putnam, president of the Indiana Standardbred Association, said that the hardest part of the delay is the nature of the circumstances. As states combat the spread of the coronavirus, industry is on hold with no imminent start date. That makes is difficult for any planning, whether it be on the part of stakeholders or stables.

“I feel like I’m in the same boat as everybody else right now. There are so many unknowns,” said Putnam, who is an owner and trainer with 35 horses in his barn. “I think if we could all pick a date out, whatever that date would be, we’d feel better about it, even if it’s not as soon as we would like. Unfortunately, there is no date. That’s what really keeps things up in the air here and keeps everyone guessing.”

The situation for Indiana horsemen is different from their peers in surrounding states. Hoosier Park was ramping up to start the meet, where other jurisdictions suspended ongoing race meets. This weekend would have been the first opportunity to earn purse money for those not racing outside the state.

“This was supposed to be our opening weekend and everyone is excited to get the meet kicked off and going. I think the longer this lingers, the potential to have more horsemen and stables under stress will increase,” Putnam said. “I think perhaps the smaller independent stables that don’t have many owners, or have no owners, that’s where it’s going to get more financially troublesome.”

The veteran horseman said the situation calls for a different approach to stable management due to all the uncertainty. He wants to be ready once Hoosier Park is cleared to open, but the guessing game makes it difficult.

“We’ve kind of backed off a little bit on the racehorses and 3-year-olds, not training as hard because we don’t know when we’ll get going. The 2-year-olds are all on the same schedule that they would have been anyway,” Putnam said. “It’s something new for all of us. We had about 10 racing. They were in their normal form. We had 12 more that were three to four weeks from qualifying. Our plan was to have a majority qualified and racing by mid-April. For me, right now we are in that holding pattern. We’re keeping them fit. We’re still working, hoping that we get some good news in the near future.”

The racing industry is one small piece of a much larger puzzle impacted by COVID-19. Indiana horsepeople, like their counterparts across the country, await the opportunity to compete and return to some semblance of normalcy. When that happens, it will serve as a welcomed distraction.