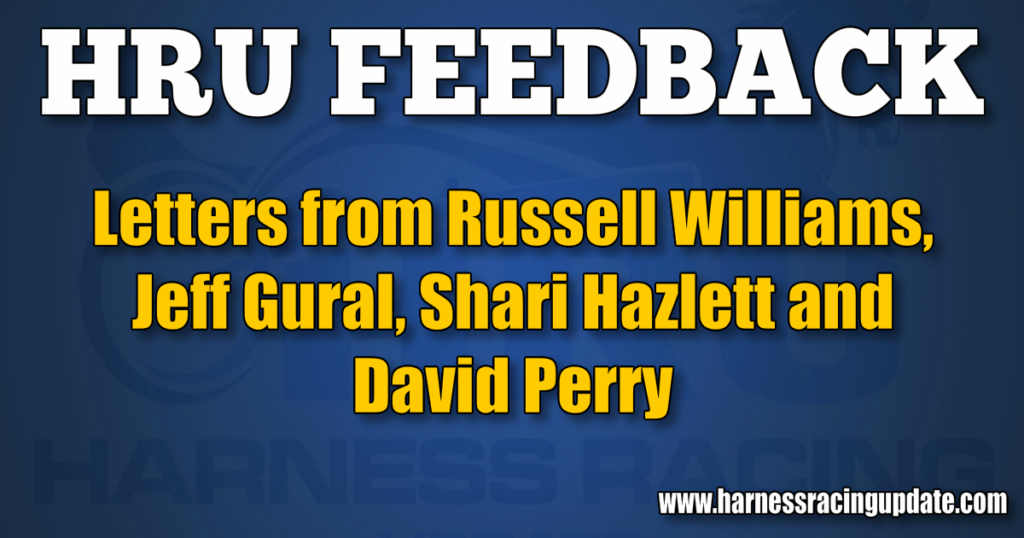 An important message from Russell Williams and Hanover Shoe Farms

I write to publicly thank the people of Hanover Shoe Farms and of harness racing generally, and to express the feelings of hope and confidence that they give me.

It seems like years ago, but back at the beginning of March we saw the necessity of not having any of our 80 employees come to work who was infected with any virus or other illness. First, we added seven days of paid sick leave to all hourly workers. Second, we decided to temporarily cover co-pays for medical attention required by any illness of an unknown origin. This way, it would not cost an employee a cent to stay home sick. Then the schools and day care facilities started closing, so we put in a plan to pay any employee who has to stay home from work because of school or day care closures 60 per cent of their wages. It was simple enough, and not that expensive, to ensure that the pandemic could bring neither economic ruin to our employees who fell ill, nor infection to those at work.

We plan to do temperature screening in the workplace, in accordance with legal guidelines, as soon as we receive our no-touch thermometers. Meanwhile, we have instituted the necessary physical-distancing rules, such as stay-in-your-own-barn and no-more-than-two-people-in-a-truck-cab.

Bridgette Jablonsky and Patti Murphy deserve commendation as outstanding members of the harness racing community. Bridgette has kept the breeding process going smoothly, which will pay off not just for Hanover Shoe Farms, but also for a myriad of other breeders two years from now, after we’ve gotten this public health threat under control. Our employees look up to Patti, who has set a wonderful example of calm confidence that has put the rest of us at ease. A shout-out also goes to Dr. Meghan Moschgat, who has maintained the best standard of equine health among our horse population (which averages 900 during the year), even though doing so may seem, at times, like operating a MASH unit.

You can’t work from home if your job is taking care of horses, but that is not the case with our office staff. Everyone in the office has been set up with a VPN plus security software, and sent home. They are maintaining our essential record keeping and communications functions while staying safe. Ryan Mitchell is to be commended for organizing our office’s response to the situation.

I’ve been on the move around the farm, making sure that the best preparations are being made and that everyone is OK. I am heartened and inspired by the good morale of all our employees. They make me feel better, and give me so much more hope. I think that the United States will emerge stronger and more coherent from this challenge, but if you could see our employees showing courage and the best of spirits in adversity, it would give you also an extra measure of confidence.

Although we must, unfortunately, expect to see mounting numbers of victims of this contagion, we’re already starting to see some bright spots in the news. For example, today a California company announced that it has received Emergency Use Authorization for a rapid molecular diagnostic test for SARS-CoV-2, which has been designed to operate on more than 23,000 testing systems worldwide, with a detection time of about 45 minutes. Other companies are going into production on manufacture of necessary medical equipment to safeguard healthcare workers and save the stricken. There will be much more encouraging news as our ingenuity rises to the occasion. The response of the American people, and especially of the people in harness racing, reminds me of Churchill’s words during the Blitz: “Do your worst, we will do our best.”

Marie Curie once said, “Nothing in life is to be feared, it is only to be understood.” Our understanding of this situation advances hourly. We must not succumb to fear, and we need not. The grace and courage of the people of Hanover Shoe Farms and of harness racing generally should give us solace and encouragement as we look forward. I am sincerely grateful to them.

When I took over the Meadowlands I made a promise to myself to eliminate the use of performance enhancing drugs at the Meadowlands. I did not realize how difficult it would be. I hired Brice Cote after he retired from the New Jersey State Police and gave him the assignment of surveillance and taking out of competition samples. We were able to make an arrangement with a lab in Hong Kong to test the samples and worked with them to try to find what illegal drugs were being used. While we had some success, and fortunately we won our court case against Lou Pena which gave us the right to exclude those trainers that we suspected of using PEDs, we knew that we still had a problem.

Fortunately, the FBI took an interest and with the tools available to them they were able to finally bring to justice those participants in both standardbred and thoroughbred racing who were in fact at the center of the illegal drug operation. I commend both the FBI and the U.S. Attorney’s office for their work on this project as we cooperated with them over the last two years to bring about the results we saw last week. Obviously, not everyone has been detained but I know from speaking with the FBI that they believe that they have arrested the four major leading suppliers of illegal PEDs and the expectation is that they will try to mitigate their sentence and give the FBI additional information as to who, in fact, their customers were. I subsequently received a call that Renee Allard had been arrested in Las Vegas and, obviously, while he was on our exclusion list, since he began buying yearlings I was under a lot of pressure to allow those horses to race in our stakes. Now that problem is solved.

In any case, had it not been for this horrible virus this would have been great news, but hopefully when that crisis passes we can all reflect on the fact that something most people thought was impossible, ridding horse racing of the chemists, is on its way to finally being accomplished. Right now, the most important thing for our industry is to protect the subsidy. In order to do that we must reverse course and support the passage of the Horse Racing Integrity Act. Over the past year, I begged (USTA president) Russell Williams to convince his board to support this legislation and I told him repeatedly that this scandal was coming and we had a problem. Unfortunately, I was not able to convince him, so hopefully now that we know how bad it is, our industry can come together and support this federal legislation that would allow USADA to take over drug testing. The funny thing is, whenever I would ask someone who opposed this legislation if they thought the current system was working, they would always say “no” so I’m not exactly sure what people wanted to see happen. Now that politicians are aware of the fact that we have a major problem with illegal performance enhancing drugs, we must do everything possible to ensure that they don’t look to eliminate the subsidy. I don’t see how we can convince them that we really care if we continue to oppose this legislation.

Thoughts on cheaters, the integrity act and more

I just was amazed that Ron Gurfein stood up for Rene Allard (full story here). Really, why? Everyone knew he was dirty! Kind of like horse racing knew Navarro was dirty! And the worst of this? Horses DIED!! DEAD! They thought it was a joke! Where the hell were the damn regulators when horses were dying? How do horses disappear and No One Notices? I didn’t used to be in favor of the Horse Racing Integrity Act, but, sorry, apparently racing are idiots. So yes feds must regulate and I agree with Dana Parham — commissioner needed. Owners quit sending your horses to the cheaters. If your horse tests positive, owner is now on notice that trainer is dirty. Take horses away or face suspension of all your horses. Maybe six months would get your notice.

The glass is half-empty

As the hooves continue to drop for the FBI investigation, I currently see little regarding any steps taken to remedy the business-as-usual corruption by those at the tracks charged with oversight and adherence to rules, enforcement and looking out for the betting public. Before you comment on the cheating vs. integrity, I grew up watching and wagering at Detroit Race Course (DRC) so if it walks, quacks or cheats, I’ve seen it and I can recognize it.

There are two key people at every racetrack, the chief steward and the track veterinarian. When you see a horse back-up through the field and doesn’t lead, close or make any run, then he should not have been cleared by the vet or entered by the trainer. This is a clear violation in our trust of the presiding officials. Each racetrack has a website to report violations, fines and findings. This a good place to go to determine if your being served by the chief steward or racing commissioner for that matter. If, on the occasion (and that includes a number of race favorites) a horse does back up or totally quits, then the website should disclose causal factors and actions taken by the track with owners, trainers and the vet who declared the horse fit to race. Perhaps the FBI needs to look into the actions or non-actions (in the case of most) by the presiding officials.

Betting irregularities: Once the crooks realize you’re on to the PEDs they are using and you’re watching for it, they’ll change the game. That new game might be pool manipulation and include placing a few hundred dollars EARLY on what might appear to be a major contender to divert attention, backing out the early money just before post at the same time crushing the exotic pools. Of course, there are many ways to cheat us if you put your crook hat on. In the majority of races, there are going to be usually two truly superior horses. If you own one, you simply manage to look good while finishing second and you kill the exotics while giving away some of the purse dollars. The following week and you’re not the favorite you take down both in winning. In 2018-2019 there was a Canadian-trained open filly (a stone closer) that managed to seem like she got wound-up a little too late for many of her starts. Did she? In terms of oversight, it’s my belief that if the customer was a prime consideration then why doesn’t the track have a state entity develop an algorithm, insert it into the Tote system for tracking large off-track bets on single-combination exotic bets.

The long and short of this story is that the tracks and management refuse to change and will be protesting till the all the lights go off in the building. Like the horse and buggy maybe it’s time to move on.