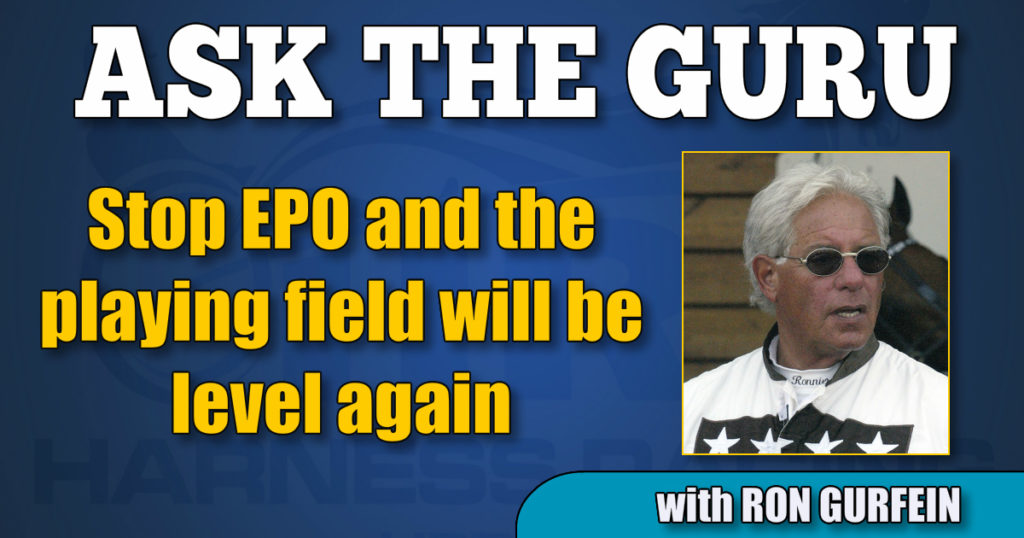 Stop EPO and the playing field will be level again

Plus, Brennan will be missed, thoughts on TheStable.ca, Clenbuterol and sports betting in Kentucky.

Tidbits: Well, well, well, what a surprise… Just what I have been saying from my first article in HRU more than three years ago. STOP EPO and the playing field will be level again. People still don’t understand. They are asking for 9 a.m. detention. My friends, this will not help. Detention barns have no effect in catching EPO users. Out of Competition testing is the only way, unless you are the FBI and can use wire taps.

The successful investigation and indictments of 27 persons involved in drug sales and usage by the FBI was not a result of positive tests, but phone taps. Somehow, I don’t think the Department of Justice has given permission to Jeff Gural’s task force to employ this method, although I would suggest it’s a great idea. You really have as good a chance to be struck by lightning as to catch a trainer using Epogen or a derivative there of.

Every day people send me emails about how to systematically unveil the cheats. They just don’t work. Time is on their side. Wire taps did the job. The only other way would be to have a plant that would catch a trainer with the needle in his hand.

I read the indictment in its entirety and the FBI task force did do a wonderful job. However, don’t be surprised if some of the lesser offenders that weren’t caught with emails or wire taps, get off. The FBI case when it comes to Red Acid and “drenches”, to me, is very weak.

On the other hand, the dialogue about Navarro and Surick and the killing of six horses is by far the most compelling and the most damming.

It took Gary and Mary West a few moments to move their champion colt Maximum Security from Jason Service — one of the 27 indicted — to Bob Baffert. It would be smart for all the owners in those barns to make similar changes.

It has been 72 hours since the news of the indictment and to my surprise many of the owners have yet to make a move or even provide us with a public statement. Kudos to Casie Coleman for immediately publishing on social media her relationships with Navarro, Surick and Oakes. It’s always good to clear the air and goes a long way to nip innuendo in the bud.

While on the subject of innuendo, the shots on social media trying to tie Rene Allard into this mess were totally unnecessary. To be perfectly frank, his eight horses at Pocono were scratched because the training facility was shut down. No one could come or go. Therefore, there were many horses that couldn’t get to the track. It really bothers me the amount of negativity there is in our sport and how quickly we jump the gun and pronounce evil.

No matter what happens, don’t let your guard down. This is just the tip of the iceberg. If you think the rest of the criminals will slow down, you are delusional. It is such a hard drug to stop and is so effective they won’t stop. Just like DEXTER (the TV serial killer, not the driver) they have to do it.

It’s great that this investigation has been so successful in ridding us of piranhas that are robbing the good guys in the sport. However, I hate conspiracy theories. Do not condemn anyone for their association with one or more of these accused horseman until there is proof of their knowledge. One way or the other, it is counterproductive.

Let’s hope that there is some serious singing to reduce sentences and they unveil the rest of the story.

I never realized what the numbers actually look like, but on paper it’s an outrage. Nick Surick has won almost three times the amount of races in nine years that I won in more than 50 years. True, they only have kept trainers records for half my career, but the majority of my success was late in life. The real numbers were Surick 1,800, Gurfein 600. FRIGHTENING.

We have lost a good guy that has spent his entire life working for the horseman in New York and New Jersey. John Brennan passed away last Monday from the Coronavirus and other complications. He was a successful trainer and was a USTA director for many years as well as horseman’s rep in New York for over 20 years.

R.I.P. John you will be truly missed.

In the same story line, Joe Faraldo Esq. told me about others with the virus, also from Yonkers Raceway, which caused the closing of the plant. Joe himself is in bed with what his doctor believes to be the virus, but, thankfully, he told me that he was feeling better Wednesday morning.

I received an email from Chuck Mooney in regard to TheStable.ca and I thought it necessary to answer him in this open forum.

To begin with, I know very little about Anthony MacDonald. What I do know he is making a major effort in bringing new owners into a sport that desperately needs them. He is honest about it being difficult to make money in this format, and freely admits it is more about entertainment. The fact that his business has grown by leaps and bounds in the past five years says to me that there are plenty of happy clients and that Mr. Mooney is merely in the minority.

From the outside looking in, if I had any criticism of the stable it would be on Anthony’s yearling selections. I realize with less money there is less quality, but I think he would be wise to get some professional help in this process.

The word on the street is that Anthony has begun farming out some of his horses to very capable trainers. This could well elevate the operation to a better level. Not saying that he is not a good horseman, just saying less is better. I am not in any way selling this product as it is this writer’s opinion that it is a totally losing proposition in the long run, but I am sure it has some pleasurable value.

Michael Mayro asks: Is Clenbuterol still a major performance enhancer in our sport?

Clenbuterol has been found to have far more advanced effects on the human and equine athletes than it was originally designed for.

In the beginning, it was a drug that was created as a bronchial aid to those with upper respiratory problems. However, it didn’t take long before it was discovered that the drug had a steroidal effect and was able to build muscle mass in a short period of time.

Twenty years ago, I remember having dinner with a designer trainer who was setting the sport ablaze with his powerful barn and after a few martinis he was vividly describing how Clenbuterol was a major factor in his program.

As far as it being a popular presence in our sport, I suppose that it is still used by many, but due to racing commissions increasing the testing limits (days needed for withdrawal) over the past 10 years, I am certain that it is no longer as popular because it’s use has been so drastically limited. In the day the drug could be given as close as 24 hours. Now, 7 days is closer to the minimum. That said, it is my understanding that it is still rampant in the thoroughbred game as there is so much more time between races.

I read recently in a thoroughbred publication that many of the claiming kings in the sport have begun racing their horses every six weeks as opposed to four weeks in order to get the full effect of the drug. The article pointed out that trainers have tried to overload the Clenbuterol use and then wait to race when the time was sufficient to avoid a positive test, only to find that their horse would crash from the withdrawal.

These drug discussions will go on as long as there is racing of any kind. If a horse needs Clenbuterol as a therapeutic drug it really wouldn’t matter how long the commission sets the withdrawal time. Therefore, if it was three weeks it would keep everyone honest.

Paul O’Neil asks: What going on with sports betting in Kentucky?

Unfortunately, when I started to answer this question last weekend, all was well in support for the bill in the Kentucky legislature. However, yesterday morning there emerged an attempt to add 11 amendments to the bill that would in essence nullify most of the positives. Andy Beshear, the newly elected governor of the Commonwealth, is in favor of the bill but is now getting opposition from the big Republican majority, especially the religious conservative right. I think that there is enough support for it to become law, but at this point its immediate effect will be determined on how diluted it becomes. Stay tuned.

Thanks to all of you for the kind words. Please keep the questions coming in. I don’t advise a trip to Yonkers Raceway in the next week or so. I am sorry I left out so many questions this week but unfortunately there was much news to discuss. I wish Joe Faraldo a speedy recovery. I have a great question to tackle next week. What’s going on with the Rick Dutrow suspension? Have a wonderful week.