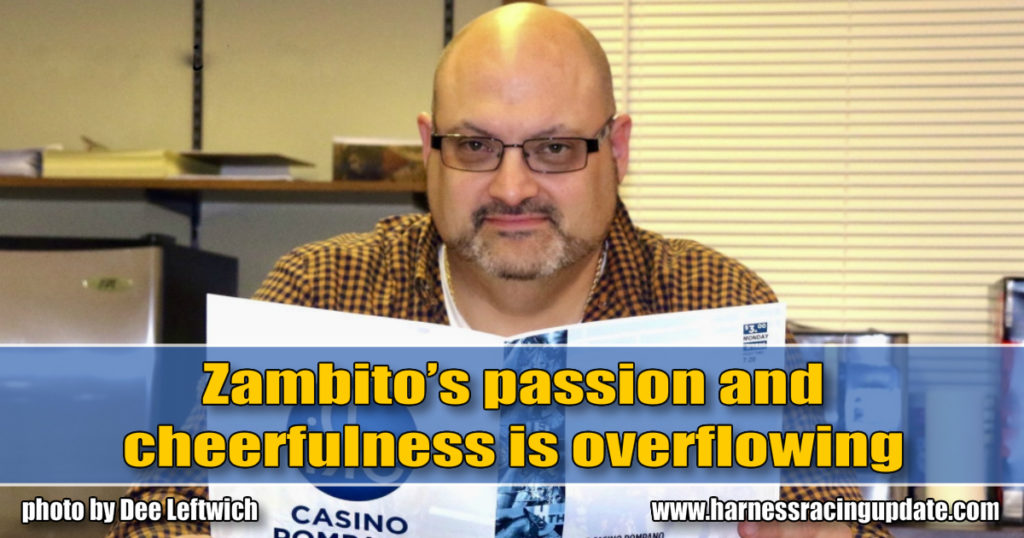 Zambito’s passion and cheerfulness is overflowing

The new racing secretary at Pompano Park has three jobs and wouldn’t have it any other way.

After a rain shower passed over Pompano Park one recent evening, new racing secretary Joe Zambito cheerfully noted that the track would benefit from the moisture.

Mention to him the grim sight of a grandstand that was closed permanently as Pompano Park faces an uncertain future beyond 2021 and he points to the good seating that was added.

When others view the glass as half full, Zambito sees it as overflowing.

“I go to bed every night and I thank God,” he said, “because I have a beautiful wife, a beautiful family and three jobs that I absolutely love.”

Yes, three jobs. He was hired as Pompano Park’s racing secretary in January. He will be the racing secretary and track announcer when Batavia Downs in Batavia, NY opens in July. And he is head football coach at Batavia Notre Dame, defending Section 5 Class D champion.

Zambito, 47, thrives on a workload that might cause other to bend and break. “When Joe has a bad day, I want to know exactly what is
wrong with him because it is totally out of character,” said his wife, Kelly. They were married in 2008 and have traveled to 42 states together.

Stacy Cahill, director of racing at Pompano Park, welcomes Zambito’s ebullient personality. “His love for racing is unprecedented,” she said. “He watches everything every night. It’s always good to have someone who loves what they do sit next to you every morning.”

Zambito grew up in Elba, NY as the youngest of eight children. They lived five miles from Batavia Downs. “I always wanted to go. I begged my older brothers to take me,” he said. “I fell in love with the colors and the sounds and the smells and the sights of the whole thing.”

He can remember collecting programs and using them to assess the abilities of different horses and put together races that would be highly competitive. He would sit up in his bed as a 10-year-old and pretend to be driving as he announced the action.

“I won just about all of those races,” he said.

He attended the State University of New York at Brockport and, not surprisingly, worked in the racing office at Batavia Downs as part of an internship in sports management. When the racing secretary fell ill and needed to be away from the office for almost a month to recover, he was asked if he could possibly fill in.

Could he? He had been doing that job in his mind since he was a boy. A career was launched before he even graduated from college.

“He can put together a horse race in five minutes. He knows his horses, so it’s not a job to him, it’s a joy,” said Kelly.

He finds joy at Pompano Park even though circumstances are difficult there. Yes, the weather is wonderful. But the cost of operating in South Florida and the doubt surrounding whether racing will continue there have combined to cut into the horse population. Filling at least eight races per card Sunday through Thursday can be quite the scramble.

So Zambito scrambles for all he is worth, with a smile that never leaves his face.

“It’s a little difficult at times,” he said. “The minimum number of races we have is eight and we’ve never missed a deadline when it comes to having eight races.”

He anticipates purse increases in April in a bid to keep horsemen there until the meet ends May 21. Initiatives are being developed to make racing at Pompano Park more attractive to owners and trainers next year. Other change could be in the offing.

“Probably we could benefit from going one less day a week,” Zambito said. “I’d rather go more races, less days, as long as everybody gets to race their horse.”

Zambito is keenly aware of the horsemen’s needs and works to build strong relationships with them. It helps that he already knew many of them from Batavia Downs.

Cahill is open to much of what Zambito suggests. “Fresh eyes on anything are always a big help,” she said.

It is unclear what went wrong at Pompano, once a bustling venue as a can’t-miss source of entertainment for many people who flee the cold and make South Florida their winter home.

“If I could put my finger on it, I’d be a rich man. I wish I could tell you,” Zambito said. “I know in Batavia we’ve turned things around quite a bit from where we were. Our betting is up. Everything is going pretty well there.”

No profile of Zambito would be complete without emphasizing how important it is to him to be a football coach. Even as he worked at Pompano one recent evening, he was looking at his phone and checking on one of his linebackers as the teenager prepared for the season by lifting weights.

For Zambito, coaching means far more than wins and losses. “I tell them all the time ‘If you have a problem, come and talk to me. That’s what I’m here for,’” he said.

His long days often end with late-night calls, whether it be from a player, parent or standardbred trainer. They can be sure Zambito will answer cheerfully, eager to do whatever he can to help.