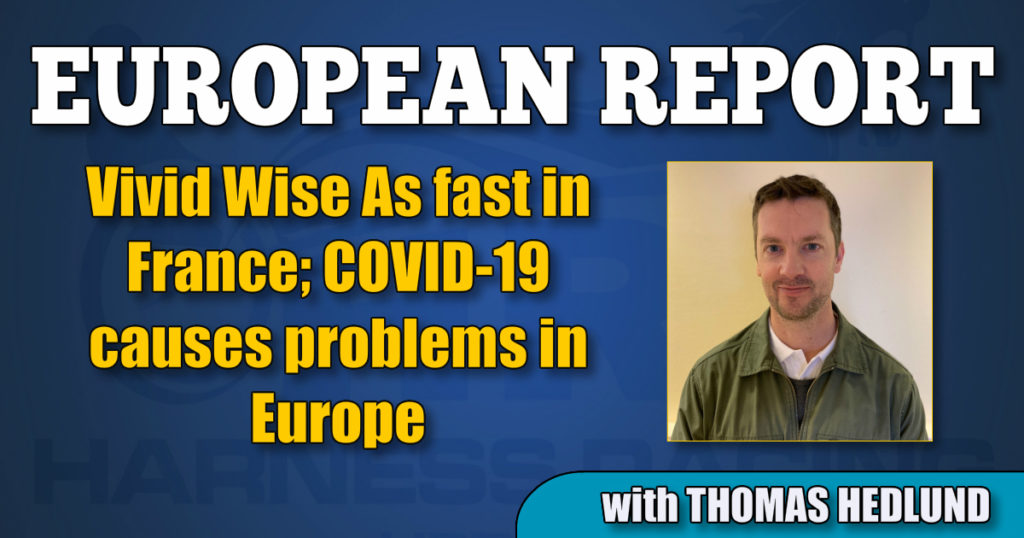 Vivid Wise As fast in France

Alessandro Gocciador-trained Vivid Wise As (Yankee Glide) was more or less outstanding when the $189,500 Criterium de Vitesse was held in Cagnes-sur-Mer in southern France last Sunday.

The mile race was contested without spectators due to the serious COVID-19 threat in the area around the French riviera, but still a winner had to be crowned and Vivid Wise As impressed Solvalla’s sports manager Anders Malmrot so much that the Italian trainer and driver Gocciadoro received a ticket to Elitloppet right after the win.

Vivid Wise As was sent to the lead midway through the race and in that position the 6-year-old colt is effective, so the challengers were never really close to him in the long home stretch. Vivid Wise As came home in fastest time in Europe so far this season: 1:52.1.

Love You mare Uza Josselyn (79 starts, 33 victories and a lifetime earnings of $1,424,539) made her last entry in a race since this start in Criterium de Vitesse. The 9-year-old Danish-bred trotter will enter a career as brood mare and her first partner will be either Muscle Hill or Maharajah.

The harness racing business experienced problems due to the COVID-19 virus spread in Europe. In Italy, races have been cancelled until April 3. Even Denmark is closing race cards for the next two weeks and the big subject that many fans talk about right now is how threatened is the Elitloppet at Solvalla scheduled for May.

The weekend of Elitloppet is by far the most important race card that Solvalla arranges during a year and the whole thing about the big mile race is just not the high stake, but the atmosphere and the audience’s impact on the show. Dave Briggs described the Elitloppet phenomenon (full story here) the race last year and the weeks – and months – to come will be crucial for the people that steer the event at Solvalla. For now, it’s a little bit early to have the right answers of what will happen in the end of May, but there is a big threat that one of the world’s most prestigious races for trotters risk to be cancelled.

Big sports events all over the continent are cancelled and harness racing in Sweden must race without spectators for the indefinite future.

April 5 is the date for $245,000 Gran Premio Costa Azzura in Turin, but whether that race will be held is an open question since Italy, and particularly the northern part around Turin, has seen a lot of COVID-19 cases the past three weeks. International Trot winner Zacon Gio is scheduled to race in Turin on April 5.