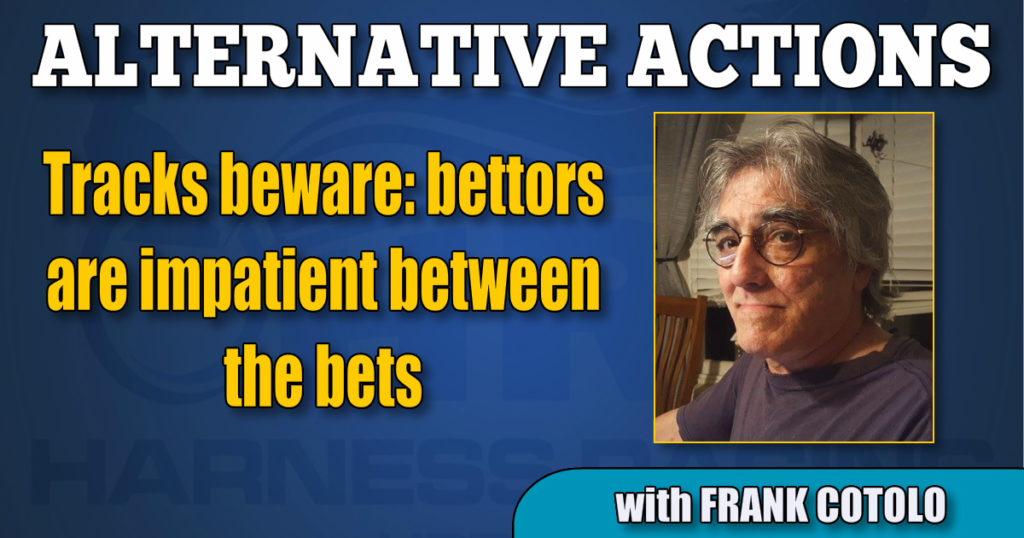 Tracks beware: bettors are impatient between the bets

Alternative Actions (AA) always checks in with pari-mutuel racetracks’ activities to attract business. We talk to veteran and novice bettors about their needs and wants when it comes to wagering on horses and, as well, AA scouts the Internet (and what analog publications are still available) for articles written about new concepts in racetrack marketing.

Recently, we read an article published on the USTA website by one of its regular contributors, Bob Carson. His monthly column, titled “Outside the Box,” presents “a menu of outlandish proposals” tracks could consider to draw new fans and keep veteran fans wagering on harness racing.

Sound familiar? Sure, Mr. Carson offers ideas, as does AA. We read his columns but have not commented on any of the contents — until now. As a caveat, though, we are not reviewing the particular idea he presented in a column titled “Playing Pods.” What came to our attention is Mr. Carson’s profile of a gambler that fuels the mechanics of the column’s betting gimmick.

Bob wrote, “Gamblers want a thrill, a rush of endorphins, and they are willing to pay for the thrill. Alas, the endorphin rush for a horse race is fleeting — a few moments… We do not offer our players the opportunity to marinate in a long season with daily highs and lows followed by a huge crescendo.”

Again, we won’t comment on Mr. Carson’s actual plan, but we do not have a clue where he found his demographic for it. The misnomer should be obvious to track administrations and it certainly is to my decades of experience with bettors at tracks on both sides of the pond — there is not and there will never be a person who plays the horses who says something like this:

“Geez, I sure wish there was more time between races.”

Bob is correct about the lure of “action.” Bettors seek thrills for their money, “a rush of endorphins.” What they do not want is an abundance of time between races. It’s bad enough on most if they get shut out or have to pass on betting a race. Believe it or not, this is especially true for new bettors.

Harness tracks, though, have been addressing the issue.

I have taken many people to the races for their first visit. What I noticed over time is how bored they become at thoroughbred programs. After two or three races, if that many, first-time visitors to a thoroughbred program always subtly ask some things like:

“So how many races are there?” (Even though they bought a program.)

“Do you usually stay until the last race?” (Hint, hint.)

“How good is the restaurant at this track?”

Sometimes they begin a conversation that has nothing to do with the racing, as if they were interested in whatever topic they present. Other times they ask for a tour of the track to pass the time between races because for the novice, waiting on the next race is like being in a dentist’s crowded waiting room; time literally slows to a torturous pace.

It has never been anywhere near that bad introducing people to harness racing because harness tracks have closed the eternal waiting period between races, to their credit, and it no doubt helped business. Still, between races you will usually hear one complaint: “What’s holding up this race?”

There are many veteran pari-mutuels bettors, though few true professionals, but they have always expressed their experiences in the same vein — that thoroughbred racing dips, drags and dangles between races. The pro bettors I knew, myself included at various times, did much of their handicapping well before arriving at the track, so even what time spent between harness races proved to be tiresome.

Our contention with Mr. Carson’s profile of a bettor only brings us back to what AA insisted from the onset of our HRU columns — it is imperative for racetrack administrations to understand their patrons by reducing their traits to its least common denominator.

I have experienced the gamut of emotions betting on all breeds at North American pari-mutuel racetracks, as well as with licensed bookies and with “the tote” on thoroughbreds in Great Britain. At times I had two jobs, the main one campaigning a $10,000 wagering bankroll. Other times, betting horses was my sole job and I played with food and rent money. Still other times I wagered casually and socially.

However, unlike many others, I learned from the hard and good times that there was always too much time between the next win or the next loss, so too many noradrenalines were ignited and the endorphin thrills turned to wildly random thoughts and bettors become absorbed with enough anxiety to make their limbs go cold and blood pressure rises.

Racetrack managements must be extremely aware that their betting attendance is without desire for “the opportunity to marinate in a long season with daily highs and lows,” even if that might be “followed by a huge crescendo.”