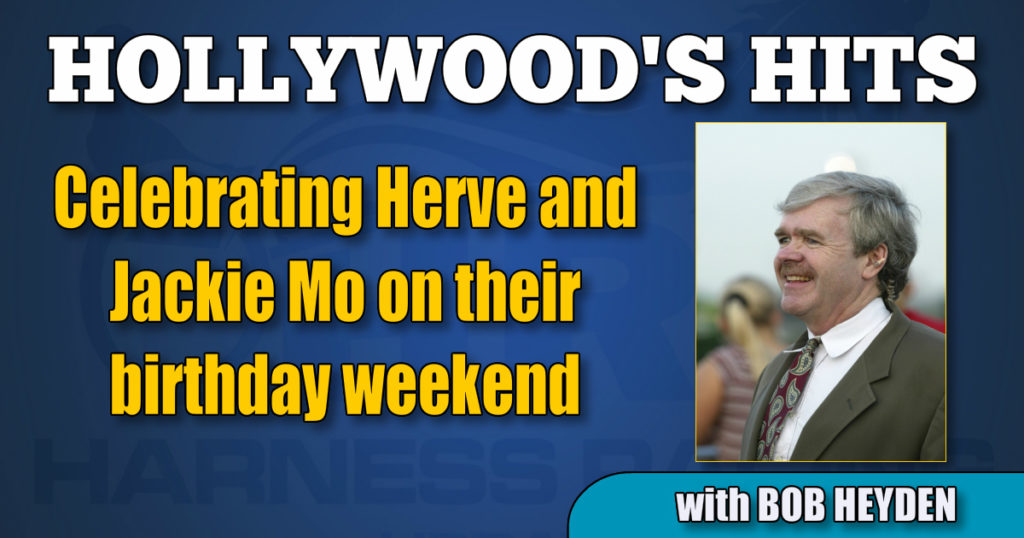 Celebrating Herve and Jackie Mo on their birthday weekend

Jack Moiseyev and Herve Filion. Their birthdays are and would have been this weekend.

Jackie Mo turned 60 on Jan. 31 and Filion would have been 80 on Feb. 1. Let’s take a look at some of their career highlights.

• Won his first race in 1977 at age 17 with Scotch VO at Brandywine.
• Was only a teenager when he won with Minus Two and Vaudeville at the Meadowlands in January, 1977. He and Kyle DiBenedetto are the only two drivers to win a Meadowlands race both before age 20 and after age 50.
• Was the driver of Precious Bunny in 1991, the Horse of the Year who set the single-season money record of $2,217,222. That year, in addition to the Jug, he won the Meadowlands Pace, the very first time that race went in sub-1:50 (1:49.4, over Artsplace).
• Three weeks after winning his first million-dollar race, he drove Giant Victory to a Hambletonian score, the very first time driving. It was his first million-dollar trotting score.
• In 1992-1993, he guided Presidential Ball to a $3,021,363 career, highlighted by another Pace score.
• He was the principal driver for trainer Ed Lohmeyer on his star pupil, Pacific Rocket ($2,333,401).
• He drove Ellamony, who set the female Meadowlands record for consecutive wins at 16, which still stands.
• He handled Stienams Place, the 1997 Breeders Crown winner and 3YOFP divisional champion for trainer Bruce Riegle.
• He won the 1991 Cane Pace with Silky Stallone, first time in the barn of Brett Pelling. Moiseyev-Pelling also teamed with White Ruffles, a star of the early 1990s.
• Moiseyev also handled such stars as 1997 Jug winner Armbro Operative, Survivor Gold, Stoneridge Scooter, Magical Mike, Armbro Monarch (Doherty Winner), Shore Patrol and Sweetheart winner Clover Hanover.
• He was both the leading money-winning driver of 1991 ($9,568,468) and the dash-winning leader that same year 769 wins. There are only three drivers in the last half century who have led in both wins and earnings the same year. Moiseyev, Herve Filion and Tim Tetrick.
• He had been runner-up in victories in 1988, and would again be second in 1992.
• He was the second leading earner in each of the next three years after winning the title (1992-1993-1994) and was the HTA Driver of the Year in 1993.
• He was one of the first drivers to handle both a $3 million trotter and pacer — Presidential Ball and Fools Goal.
• Lifetime, Moiseyev has driven the winners of some $130 million.