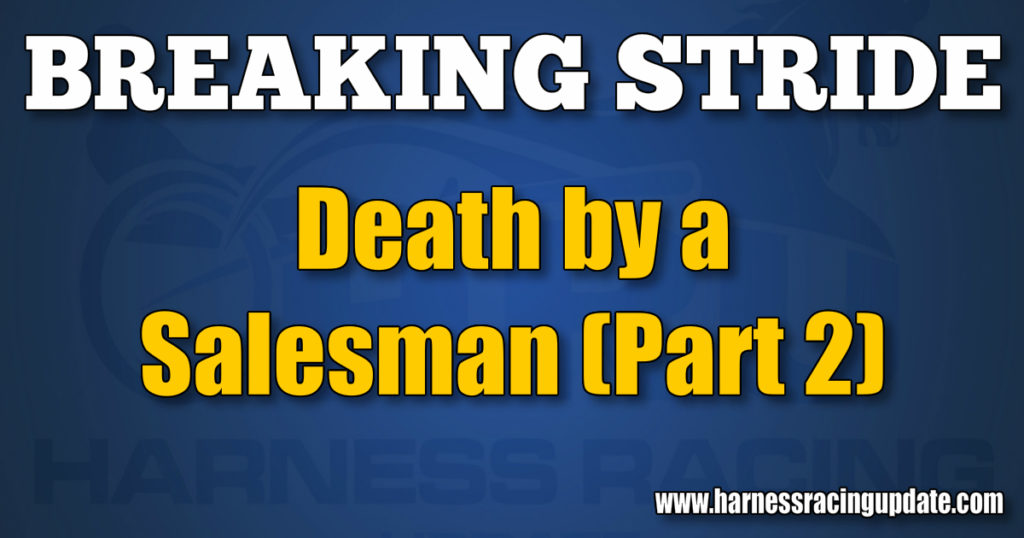 Death by a Salesman — Part 2

Idling at the Taco Bell drive-thru, I turned to my wealthy employer and said, “A few weeks ago, I read something brilliant.A clever fellow from Canada is going to host a $100,000 stakes race in the year 2023 at Woodbine Mohawk Park. The race is for the progeny of a new stallion named Jimmy Freight (full story here). If I lived in Canada or if I had a pacing broodmare, this stallion would be on the table.

“Any brilliant idea should immediately be stolen and tweaked.”

“True, I played bass guitar in a rock band. For our setlist, we leaned on Tom Petty and the Heartbreakers with a dash of Dylan. We billed ourselves as Tommy P and the Tone It Downs. We were doing okay, playing some gigs at theRock N Bowl.Then I decided to tweak. I nagged Tommy into doing original songs and adding a tuba. Those were unfortunate tweaks. The tweaked Tone It Downs got turned off. Tommy P went solo.”

“So, your insane plan this week is to tweak the concept of a race only open to a crop from a particular stallion?”

“Yes. Imagine that Adam Bowden of Diamond Creek Farms went on a bender and called me asking for advice on marketing Creatine.”

“That is a phone call that will never happen.”

“Probably not, but my brilliant solution would be to offer a similar special race open only to 2023 offspring of Creatine with a tweak.”

“What’s the purse of your imaginary race?”

“Exact prices and details are to be determined. Trey paints with a broad brush and then delegates. Creatine is doing very well without me. He has some nice looking babies at the farm where we keep our mare. His first crop races this year, I have liked this stallion ever since he stepped into the game a few years ago. Twice Creatine was a finalist for my broodmare. My decision came down to coin flip, but I went the other way. Weird stuff can factor into pulling the trigger on a breeding contract. Tell you this, if he had the races I am proposing on the table, I would have a couple of Creatine in the barn.”

“I want the original race option with a tweak.”

“Does it involve a tuba?”

“No, the tweak involves subtraction.”

“Yeah, the big race with the fat purses for the Creatine Crop would take place after stakes racing in 2023. At that point, my tweak is a second race on that day, nothing huge, maybe a $20,000 purse that is open only to Creatine horses that did NOT earn $10,000.”

“I don’t like the idea that if Creatine pops a few monsters in this crop, and he very well could, those top horses can swoop in and take all the money. The good Creatines made it, and good for them, those breeders are happy customers. This second race is for the less fortunate offspring, a race where the slower horses from Creatine can recoup some costs. As a buyer, I’m looking for an insurance policy from a disastrous year on the track.”

“Insurance policies in harness horse racing are a strange concept.”

“We have one broodmare. We have dozens of viable stallions in the state, hundreds in other states. There are reasons we cross them off. However, if a stallion has the carrot of a big race attached and if this insurance race is attached, it means a lot to small-timers. Our thinking is that with a limited pool of eligibles, our possibilities improve.”

My pal added, “And if you send the horse to a sale, the additional races for Creatine horses could have a positive effect in a sales ring.”

I nodded, “This happened to me. We danced to a big dance. We cashed an insurance policy.”

“Happened? Danced? Cashed? Past tense? Isn’t this a new concept?”

“Not for me. Wishing Stone stood his first season as a stallion in New Jersey. Despite never setting foot in the Meadowlands and not knowing a single resident of the state, we bred our mare to Wishing Stone simply because we predicted a very small crop with two legs and a final for the Sires Stakes.”

“Well, first of all, horse buyers are smart. A few noticed our filly was in a very small pool, they noticed the mathematics and quickly grasped that merely qualifying placed this filly in a lucrative race. We received a few offers.”

“Nope. As it turned out, we should have, but we were having too much fun. The crop was small, maybe a dozen. We followed every horse and got to know our competition by name. We did qualify, barely, so our filly was eligible for two legs and the final in short fields of maybe six or seven.”

“It was interesting, a new slant on racing with the limited pool. That season was fun, but we did not make money.”

“Trey, how could you not make money?”

“It’s a gift. However, we did not get killed due to our little insurance policy. Yannick Gingras will never know how much driving our marginal trotter across the line for the last check meant. It kept us from total fiscal ruin. It may very well have kept us in the sport.”

“So you are looking for a stallion that can recreate that limited field experience with private races for both the top and bottom tier.”

“Do you think these ‘Sire Only’ races could become a regular part of the racing scene?”

“I hope so. Strange things can happen. Heck, Tommy P and the Tone It Downs could make a comeback at the Rock N Bowl.”