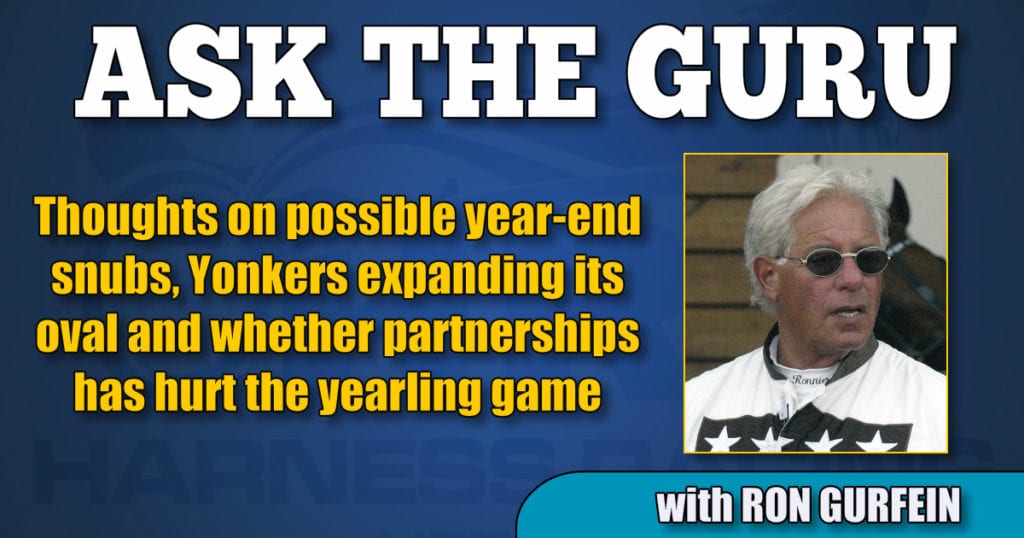 Thoughts on year-end snubs, Yonkers expanding its oval and whether partnerships hurt the yearling game

Tidbits: I have received lots of emails about what a great job Russell Williams is doing as USTA president. The word on the street is that he is getting things done, which certainly bodes well for us.

I stopped for a moment at the Harrisburg sale to offer him the compliments I had received and naturally he was very humble.

I do however strongly disagree with his assessment that the 60 directors are a necessity. Trim the fat. We do not need the expense and it is useless to the common good.

While ranting I will also point out that the USTA webpage is boring at best and changes so infrequently we may be better served by carrier pigeon.

My suggestion is trim the directors and use the money to have a full-time writer for the webpage with a 800 number so our flagship association can stay relevant.

I received a very newsworthy note from Gates Brunet praising me for defending the drives of Brian Sears on Greenshoe. Gates pointed out that Brian was asked by the connections of Bold Eagle to warm the horse up for them as is the custom in Europe. Unfortunately, Brian was a passenger and had to use every muscle in his body to hold the horse who was a runaway on the racetrack. Returning to the paddock spent, he had to jump on Greenshoe when he wasn’t near to 100 per cent himself. This situation, plus the horrid weather, may have created the perfect storm that enabled his stablemate Gimpanzee to prevail.

Phillip DeLucca asks: It seems to me that the forming of partnerships has had a profound effect on the yearling business. What are the Guru’s thoughts?

It’s really funny that 20 years ago or so, I remember farm owners and managers crying that partnerships were killing them. George Segal would smile like a Cheshire Cat seeing a dogfight between Bob Suslow and Tony Pedone over a Brittany bred filly.

The emerging theory was that if Suslow and Pedone had become partners it would lessen the prices, which to some extent in those days was true.

Fast forward 20 years and guess what? The numbers are increasing at a spectacular rate and whether it is partnerships, the economy or both, something is going right.

Back in the day if you had $200,000 to buy a colt you were basically golden. In today’s market at the two major sales venues Lexington and Harrisburg you could have gone home with nothing. It’s nice to have unlimited funds and partnerships have definitely driven prices to new highs. Not that some couldn’t afford the $1 million colt on their own but there is safety in numbers and split three ways it significantly lowers the degree of exposure.

In today’s market, when the powerful teams bid against each other there are new benchmarks. The $200,000 colt is now $500,000 and the $500,000 colt no longer has a limit. If the financial climate remains it would not shock me to see new records every year. If the two big ticket colts fare well it would be sensational for the sport.

All this basically put me between a rock and a hard place trying to buy for Lindy Farm. When the Antonaccis bid, it’s all their money, so to fight the partnerships of Alagna, Burke, or Svanstedt becomes an uphill struggle. I loved Reflect With Me last year when she sold as a yearling. She was small and should have been in my opinion under the $100,000 level. She was a half-sister to a Well Said filly I bought from Brittany for $23,000, Lucy’s Pearl, winner of 23 races and $350,000. So she was an upgrade, but not a $100,000 upgrade. We were the underbidders to George Segal and Brad Grant at $120,000. I believe if we kept bidding we all would still be there. It’s great to select a Breeders Crown winner, but better when she is in your barn not someone else’s.

Paul Archer asks: I read on Facebook that Brad Grant was not listed in the Dan Patch owner of the year considerations, what’s your take on that decision?

This is exactly why I refuse to join the U.S. Harness Writers Association. There is a core element that really has no interest at all and are influenced by others. This is why we have had such an odd array of nominations to the Hall Of Fame. Many times politics has reared its ugly head in Horse of the Year voting. The system as it stands now simply stinks of lack of interest and corruption. I myself have been a victim of the lack of knowledge among the harness writers. I don’t want the Moiras and the Gordons, and the Davids to take my comments to heart. You all know me for more years than I wish to reveal and you in no way fall into this category. The ones that do, know who they are, I THINK.

Back to this year’s choices — that as yet have not been published — but some have slipped through the cracks. I will discuss two. Brad Grant buying the first $1 million yearling to me is more than enough, to say nothing of his vast equine holdings and his amazing success on the racetrack, not only with great stakes horses but overnight horses as well. Add to this he is truly a wonderful guy.

I don’t want to demean the real nominees, both have a reasonable claim but in this writer’s opinion the winners are in no way comparable in overall achievements than Brad Grant.

While on the subject how did the harness writers leave out Joe Bongiorno for the Rising Star award? He won stakes for many top stables, won a myriad of races on all size tracks, including breaking into the top five at Yonkers Raceway’s extraordinarily tough driving colony. Once again I am not demeaning the choices of the harness writers, simply questioning their omission of Joe Bongiorno.

Tom Santoro asks: I am in Parx Casino in Philadelphia and some of the guys asked why doesn’t Yonkers build a mile track? Is it a lack of real estate? If they made it a mile they would be the number one track in the country.

First of all, the Meadowlands as long as the doors stay open, will always be the number one track in the country. That said, since I was a kid there was always a discussion of making Yonkers a five-eighths mile track and there were plans unveiled and there was more than enough room building out toward the south side parking lot. The mile would be a major stretch.

If you had spent any time in Yonkers, as I spent much of my life there, management was always happy with the existing operation. Change was a word that was not in their vocabulary. And here we are over 60 years since I walked into the race office and had to face the “wonderful” Ed Parker, the toughest most miserable race secretary that ever looked over a desk at me. In those 60 years, the race office is the same, the barn area is the same, the clubhouse and grandstand are slightly different because of the casino. They owned the land and felt there was no need to change, which has certainly worked well for them. They sport a program that has the highest purses in the industry by a long shot. They were so successful that they enticed MGM, the gambling giant ,to purchase the plant recently.

I am running away with myself. Steven Starr, my good friend, was the racing secretary and I would consider him the only shining light in my Yonkers experience. Don’t get me wrong, it’s great for the horsemen. The money is there and — you heard it here first — the half-mile is part of the legacy, it is there for the duration.

More important than the track, they should level the paddock before it is condemned by the board of health. They may even find Jimmy Hoffa.

Happy New Year to all my readers and friends. Please keep the questions coming in and have a healthy and successful racing season in 2020.