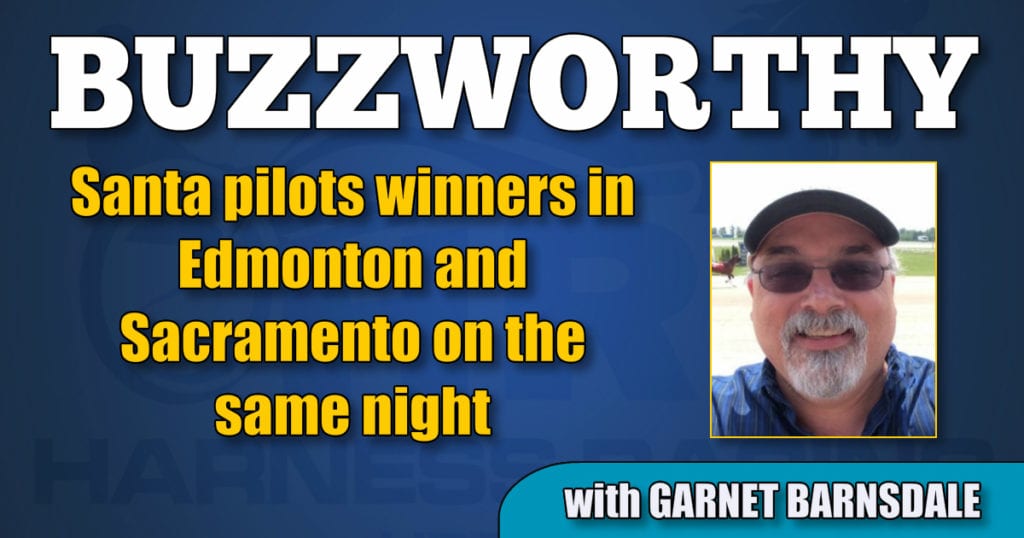 Santa pilots winners in Edmonton and Sacramento on the same night

Twitter was buzzing last Saturday night (Dec. 14) when Santa – that’s right, Jolly Saint Nick himself – appeared in not one, but two races at two different tracks in two countries as a catch-driver.

Santa Claus catch drives on 11-1 HF Opects Trident to upset in the 2YO C&G Final of the Century Milers Pacing Series. No, I’m not kidding…

Perhaps trying out some new recruits for his sleigh which will soon see action in the Christmas Eve preferred, Santa – who had a striking resemblance to Century Mile trainer/driver Harold Haining — wasted no time sending the 2-year-old son of Vertical Horizon straight to the front. Hurrying around the track as if he was running out of time delivering the final gifts on Christmas, Santa would never relinquish the lead, but he could be heard yelling “On HP!” as they neared the wire, his urging helping preserve victory by a scant (but unlit) nose.

Returning $25 to his faithful, HP Opects Trident was breaking his maiden – perhaps buoyed by Santa’s magic hands – and the $10,000 winner’s share of the purse boosted his lifetime earnings to $11,929 for owner Colleen Haining of Lacombe, AB. Haining took care of the training duties.

We can only assume that Santa then pointed his sleigh southwest to California because tweeter Al Pappilardi – apparently a non-believer – tweeted his arrival at Cal Expo: I haven’t seen a driver live wearing a Santa suit since Luc Ouellette did it about 25 years ago at Yonkers. Nice!

Yep, there he was again, in his red and white suit sitting behind 6-year-old pacing gelding My Friskie Boy as the horses headed to the gate for a non-winners of $750 in the last five starts pace. The Cal Expo bettors must have seen Santa’s stellar stakes-winning drive at Century Mile, because they hammered him down to 4-5 at the windows.

Sitting sixth early, Santa, who had now somehow taken on the resemblance of Cal Expo veteran reinsman Gerry Longo, eased his charge into the outer flow at the half and started his march toward the front. Displaying some driving deftness, Father Christmas picked up perfect cover which he rode to the head of the lane.

Tipping off that golden cover, Santa sent My Friskie Boy past leader Sin Machqueen but the cross-country Christmas Double wasn’t a lock as there would be a challenger to deal with as pocket-sitter A And C Artist and others were closing in. Track announcer Gary Seibel – fully engaged in the moment – supplied the dramatic call of the finish: “My Friskie Boy, Ho Ho Ho Holding on for Santa!”

Just like that Santa was a perfect two-for-two on the night and he showed a knack for winning the close ones, despite dressing in his full suit. If Santa truly was test driving new recruits, don’t be surprised if you see some hopples way up in the sky next Tuesday evening in front of a sleigh.

Merry Christmas and Happy Holidays everybody!