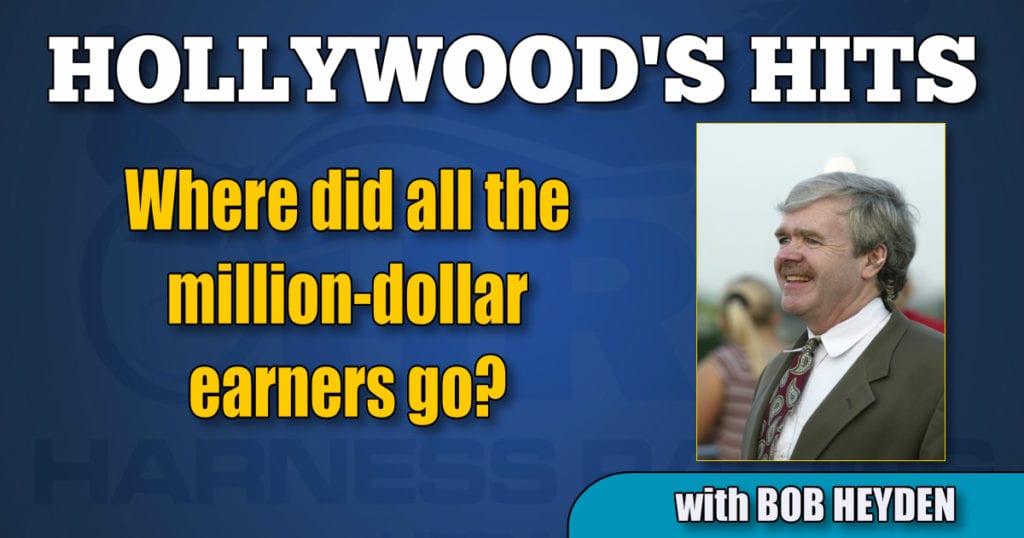 Where did all the million-dollar earners go?

Where did all the million-dollar earners go?

You don’t see this often…

… where the horses that finished second and third in the Hambletonian surpassed $1 million, but the winner, did not.

Speaking of the Hambletonian…

The above money stat refers to 28-year-old driver Bob McClure (Forbidden Trade) and a 27-year-old trainer Melander (Greenshoe and Gimpanzee).

The 94th edition of the Hambletonian, for only the fifth time in history, saw a driver in his 20s win the Classic. And for the first time ever, it happened back to back.

What is Shartin N’s greatest achievement?

In 2018, her 19 wins tied with Always A Prince for the most wins in North America among every earner in the Top 50.

For the first time in harness history, two drivers will share 13 straight money titles in North America. Yannick Gingras (four times) and Tim Tetrick (nine). Tetrick reeled off seven straight until 2013 and then Gingras posted four in a row. Tetrick has captured the past two, and this is a new standard for only two drivers in the year-end tally. Prior, it was 12 straight years, 1979-1990, when John Campbell won it eight times and Bill O’Donnell four.

1. A pacing Triple Crown winner for the 16th straight year. Never has the sport gone this long without one. The last one was No Pan Intended in 2003.

2. A repeat winning sire. A quarter century has gone by without any sire having two different Horses of the Year. Cam Fella did it last in 1991 and 1994 with Precious Bunny and Cams Card Shark.

3. Twenty years without a Horse of the Year repeater. The first time ever two decades have gone by without one.

4. Twenty-nine years since a 30-something was elected into the Hall Of Fame. Tim Tetrick got the call at 37, and has since turned 38. The last time this happened was when John Campbell in 1990 went in as the youngest ever at 35.

6. Thirty-one years since a driver has won the Hambletonian back-to-back — 1987-1988 John Campbell with Mack Lobell and Armbro Goal.

8. Twelve years since anyone not named Ron Burke has appeared on top of the trainer standings at year’s end.

In the sophomore pacing fillies’ division, look how close the 2nd-5th place earners are that are all chasing Warrawee Ubeaut — $950,610

Papi Rob Hanover wound up with the most money even being set back to second in the Breeders Crown. He earned $754,774 and Crown winner Tall Dark Stranger made $717,514.

Will Lather Up (1:46) win the division title over McWicked, the defending HOY? If not, Lather Up would be the fastest ever horse to not win a division title. (He didn’t race after Aug. 31 making it something of an uphill climb) Lather Up actually averaged more money per start ($64,000) than McWicked did ($61,000).

The sophomore trotting filly class was, by far, the toughest division to decide who was best. This is likely to be one of those votes where four fillies all will get 20 plus votes: Ramona Hill, Senorita Rita, Sister Sledge and Hypnotic AM.

Marcus Melander’s trio of Greenshoe, Gimpanzee and Green Manalishi banked $3,052,640 collectively. All were race timed or won in sub-1:51.