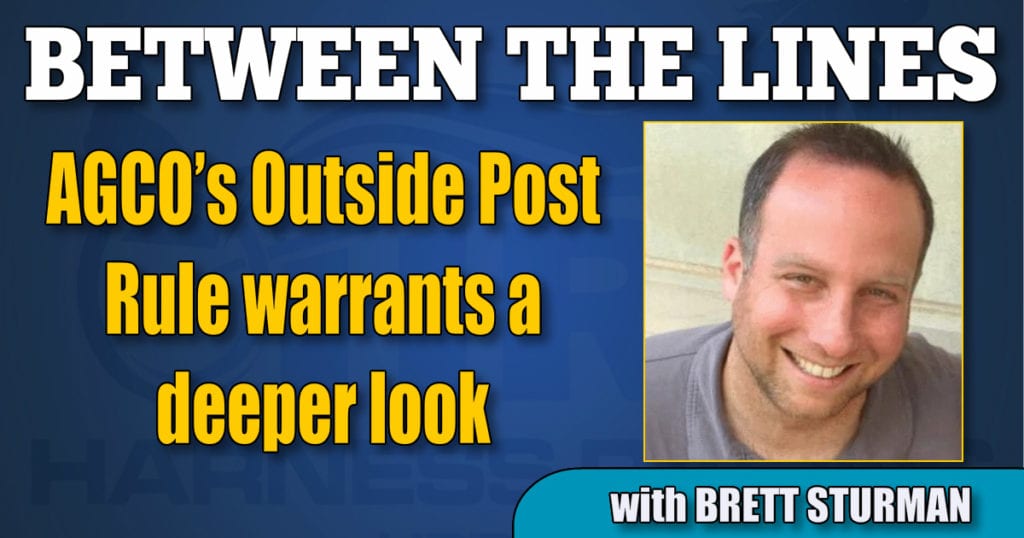 Effective yesterday (Dec. 14), a new policy known as the “Outside Post Rule” went into effect at The Raceway at Western Fair District and at Flamboro Downs. Formed in conjunction with the Alcohol and Gaming Commission of Ontario (AGCO) and the Central Ontario Standardbred Association (COSA), the rule states that if a horse scratches from an outside post then they will be assigned that same outside post should they re-enter within 15 days.

The rule applies to horses scratching from the outside post (post 7 at Western Fair and post 8 at Flamboro) for any reason. Scratching as a result of any reason such as lame, sick, weather, transportation – honest reasons or not – all will be applied the same under the rule.

The reason for the rule is obvious. When determining what drives handle, the single greatest factor that determines handle is field size. This is universal for all racing at all tracks – the larger the field size, the higher the handle. And while I doubt there are any official available statistics published on post position scratches, anyone can see that on a day to day basis that more scratches (not coincidentally) come from the outside posts than the inside posts. By forcing horses to retain their same outside starting post in the event of a scratch, the rule is designed to discourage scratches due primarily to a poor position.

The rule is well-intentioned, but perhaps all unintended consequences weren’t thought through.

Every day there are borderline cases where a horse might be a little off health-wise but theoretically still able to race. In these situations, it forces the hand of the horse’s connections to race a horse that they may otherwise would not have in order to not be guaranteed the outside post should the horse be able to race over the following two weeks. It’s a similar situation with weather. I’ve seen plenty of races conducted from these two tracks in blinding snowstorms. These cards are actually neat to watch as a spectator, but they usually produce a ton of scratches because of commuting to the tracks in the weather, and now it could force connections to make unsafe traveling conditions to fulfill the outside post requirement.

I get that the point of the rule is to eliminate frivolous scratches, but judges should be able to use discretion when the rule should be applied. In obviously poor weather conditions, the rule should be waived. Also, if a trainer can produce any type of medical reports on a horse to prove that it would not have been in the horse’s best interest medically or physically to race, then those too should be reasons to waive the rule.

Now, let’s say that a horse shouldn’t be able to have any excuse – even valid one – as a reason to dodge the outside post. That’s fine, but then shouldn’t it work both ways? What if a horse has post 1 but needs to scratch? In this case it’s far more likely that the reasons for the scratch would certainly be legitimate, and why then wouldn’t the horse be entitled to the same post 1 if he re-enters within the next couple weeks?

Post position numbers from the track validate the well-known correlation between wins and post positions. This year at Western Fair, the outside post 7 has won 6 per cent of races on the pace and just 4 per cent of races on the trot. Similarly, at Flamboro Downs, their outside post 8 produces just 3 per cent of winners in pacing races and 4 per cent in trotting races. Interestingly enough, there isn’t much disparity of winners at either track (or most tracks for that matter) when it comes to posts 1-2-3, but once you hit the outside couple posts is where there’s a more dramatic drop-off of winners.

With numbers like these, it’s plain to see why more scratches come from outside posts. Even from a handle standpoint, how much additional handle is really being generated by having an 80-1 longshot from the outside post?

Half-mile racing is a tough proposition for harness racing as it is and though well-meant, I’m not sure if ensuring horses remain in an outside post for a real reason is the correct approach.