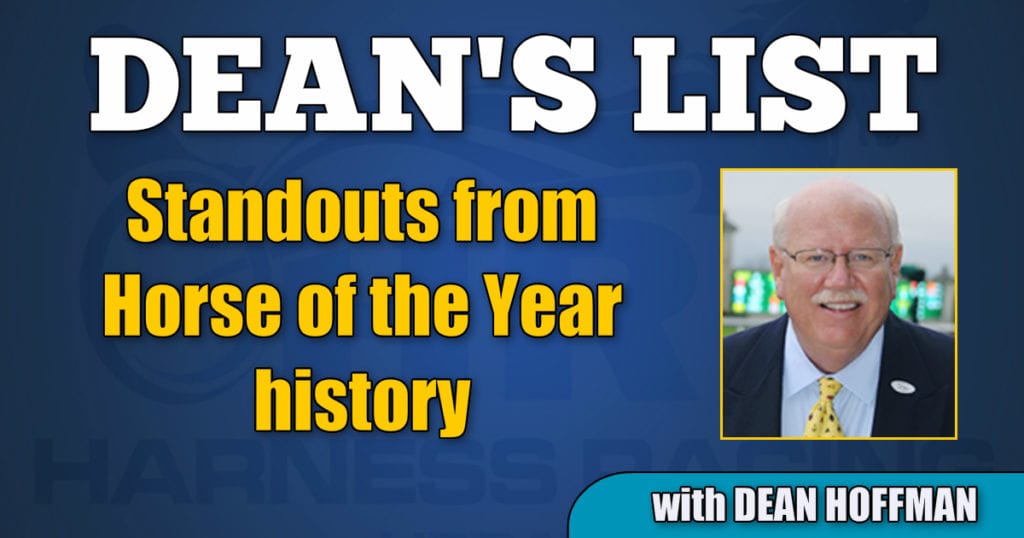 Standouts from Horse of the Year history

So it’s dicey to make predictions in advance. It’s safer to look in the rearview mirror.

This great honor was inaugurated in 1947 and the first official Harness Horse of the Year was Victory Song, a winner of 12 of his 20 starts that season. (By the way, Victory Song’s heroics earned him exactly $17,172 that year).

The next year, the top honor when to Rodney, who spent most of 1948 beating up on his older predecessor Victory Song. Rodney was a behemoth of a horse and he simply overpowered Victory Song and others in winning 12 of his 13 starts that season. His championship season was funded by earnings of $37,782.

Interestingly, both Victory Song and Rodney had come up slightly short in their Hambletonian efforts. Victory Song was edged by Chestertown in 1946, a victory many said resulted from Tom Berry’s clever drive behind Chestertown. Rodney won the first heat of the ‘47 Hambletonian, but was no match for Hoot Mon’s speed in the next two heats.

Both Victory Song and Rodney enjoyed successful stud careers, but neither one sired a Hambletonian winner. Yet, their male lines live on today as two of the strongest in the world.

Those two nonpareils would be, of course, Bret Hanover and Nevele Pride.

Bret burst onto the standardbred scene in 1964 by winning all 24 starts in his freshman campaign and becoming the first juvenile ever to claim Horse of the Year honors. Then Bret repeated at ages three and four and he retired as the richest and fastest standardbred ever.

While Bret was exiting the standardbred stage, a surly Jersey boy named Nevele Pride was about to become the sport’s lead actor. He never won any Mr. Congeniality contests, but he won just about every time he faced the starter: 57 times in 68 starts over three seasons. He became the other harness horse to win the top honor three consecutive years.

Other extraordinary champions surely deserve recognition. Niatross was named Horse of the Year as a freshman in 1979 and then repeated the following year after his jaw-dropping 1:49.1 time trial, lowering the existing speed records for standardbreds by almost three seconds. (Imagine a horse today clocking a mile in 1:43.1 and you’ll understand the impact Niatross made).

The other multiple winners of top honors include the lion-hearted Good Time, a winner as a sophomore in 1949 and then again as a 6-year-old in 1952. That is proof positive the little tiger’s staying power on the track.

Good Time and his trainer/driver Frank Ervin never ducked a fistfight on the tracks of America. His first HOY season in ‘49 came after he won 15 of his 19 starts, but when he repeated in 1952 ,Good Time found the wire first in 23 of his 33 races.

Scott Frost won the Triple Crown in 1955 and that was enough to make him Horse of the Year and then he repeated the next year.

Albatross was voted the sport’s most dominant performer in 1971 and the following season when he was campaigned to everlasting greatness by Stanley Dancer.

Delmonica Hanover was voted the sport’s best in 1974 despite winning only five times in 17 starts in North America. One of those wins, however, was a repeat triumph in the International Trot at Roosevelt Raceway and, early in the season, she’d captured the toughest trotting race of all — the Prix d’Amerique in France. It’s a little-known fact that this great mare got her lifetime mark of 1:59.2 in her final career start at Hollywood Park.

Cam Fella, the horse that refused to lose, never ducked a challenge in his career and won 58 times in 69 starts in 1982-83 while shipping all over North America and racing on every size track.

Cam Fella wasn’t flashy; he was just efficient. He probably won more races by less than a length than any horse in history. But he usually found a way to win.

Mack Lobell was the cynosure of all eyes wherever he raced in 1987 and 1988, including Europe, and his supersonic trotting speed made him a two-time Horse of the Year.

More than a decade after Mack emerged on top of the trotting scene, the behemoth mare Moni Maker won admirers on both sides of the Atlantic with her fabulous international campaigns in 1998-99.

What horse will wear the crown for 2019? The voters have begun making that difficult decision this week.