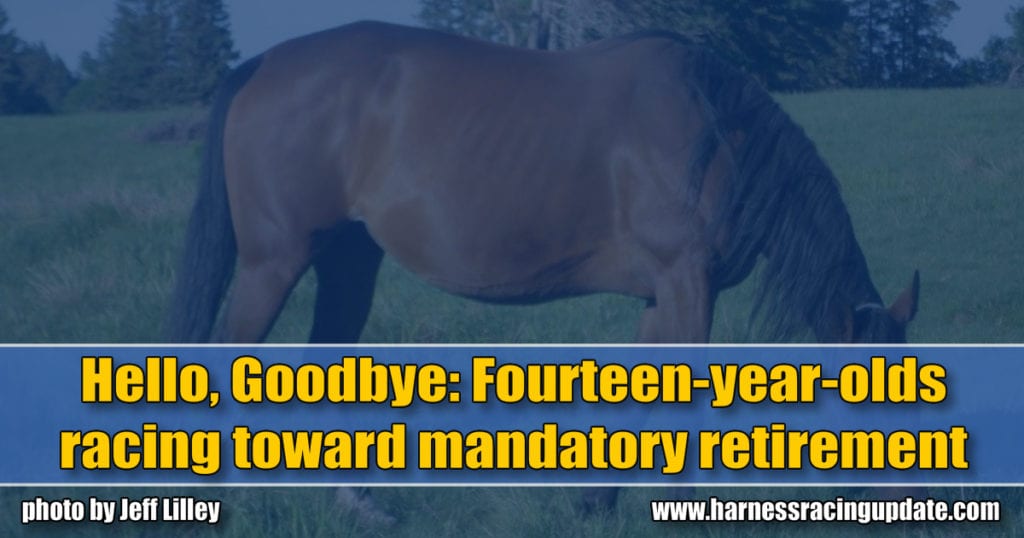 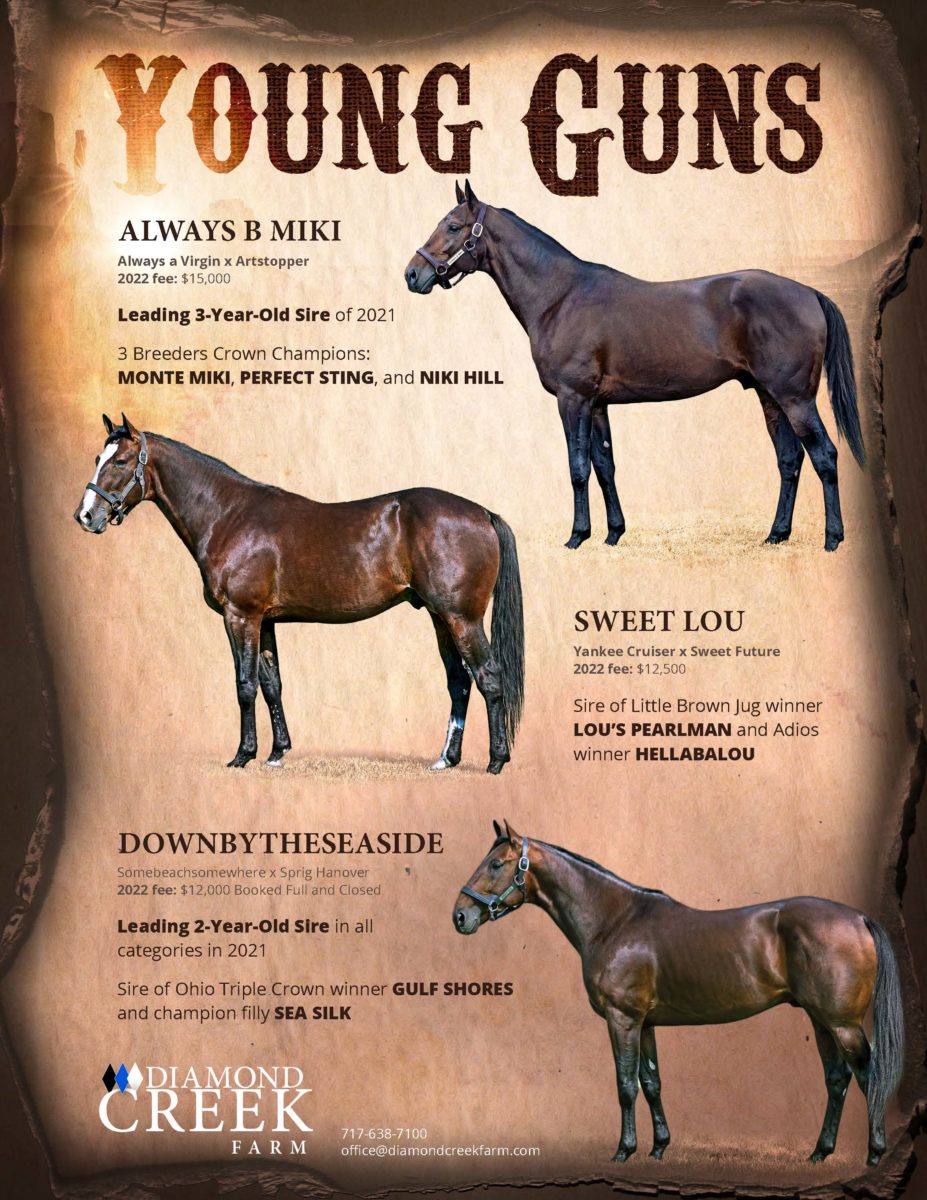 Standardbreds are renowned for their longevity, but few race all the way to their official 15th birthday. This year in North America, 64 pacers, 17 trotters, and a double-gaited performer made at least one start in their final year of pari-mutuel eligibility. Anderlecht (p, 9, 1:48.0f; $977,723) leads the pack in seasonal victories (18 at press time) and earnings ($37,574). The 14-year-old Cams Card Shark gelding has recently dominated Maine’s $4,000 claiming ranks, with negligible risk of being claimed. Anderlecht, 48-time winner Must Be the Bunny (p, 8, 1:51.2f; $310,343 ), and other locals on the brink of mandatory retirement will be celebrated with a Dec. 1 ceremony at Scarborough Downs.

Shawn Wiles, the director of racing and facilities at Monticello Raceway, confirmed that Monticello’s traditional Au Revoir race, restricted to 14-year-old trotters and pacers, will be carded next month — if it fills. The headline-generating Au Revoir Pace debuted in 1991, although it has been cancelled more often than it has been raced in its 28-year history. An insufficient number of entries has been the norm: In 2004, the New York State Racing and Wagering Board approved a pari-mutuel farewell match race between The Suleiman N and Troy D. In 2005, it took permission from the Board and horse owners to assemble a bettable seven-horse field combining trotters and pacers.

Courtesy Jeff Lilley | After racing until his mandatory retirement age, Kendal Python is now living the life in retirement in Prince Edward Island.

There are simply not very many 14-year-olds dashing through the snow in late December. (None are presently active at snow-free Pompano Park or Cal Expo, either.)

“We have not been able to fill the [Au Revoir] race in several years,” said Wiles. “[But] with the abundance of 14-year-olds on hand this year, we intend to give it a go.” A total of 43 horses in their final year of eligibility had raced in North America this November, suggesting the “Mighty M” might be saying hello to a 2019 Au Revoir.

PEI horseman Jeff Lilley says there’s a reason why farewell races for retiring horses are difficult to assemble. He owns Kendal Python (p, 5, 1:58.4h; $58,468), a 25-year-old “lawn ornament” with 494 lifetime starts. “He retired with the most starts in North America,” said Lilley. “I claimed him when he was four, in the bottom claimer at Summerside, the $1,500 claimer. He kind of started my career, in a sense. He kept me sober. He gave me some kind of project, something to keep my mind occupied. He saved my life, in some respects.”

At age five, Kendal Python went from competing at Hippodrome de Montreal to racing at Truro Raceway, with only a short rest between. The Topnotcher gelding hit the board 21 times in 57 starts that season, with nine victories. Owner/trainer Lilley proudly noted that his pacer had to qualify just once in five years. But as time went by, he observed that Kendal Python went from being “a little goofy in the post parade” to becoming more of a handful, even after getting “a major overhaul” from veterinarian/trainer Dr. Ian Moore.

At age 12, Kendal Python took on 14-year-old Conrad Seelster in Rideau Carleton Raceway’s 2006 “Clash of the Iron Horses.” Lilley drove his gelding in the non-wagering New Year’s Eve match race, well-publicized as a “Maritimes vs. Ontario” challenge and carrying a $2,000 purse. Conrad Seelster and driver Jeff Houghton set a slow early tempo; Lilley blindswitched his rival with a late inside move in the race’s final strides. Conrad Seelster held on over Kendal Python, who finished a fast-closing second in the memorable 2:06.1f mile. Lilley had one regret afterwards: “I wish we had gone to the half in :56 that day.”

Keeping a 13- or 14-year-old racehorse competitive at any level is difficult because of today’s high speed and demanding stakes schedule for young horses, noted the Island horseman. “Management is everything. A lot of them are emptied out at two and three,” he said. Even if physical issues are not troubling an older horse, keeping the trotter or pacer mentally dialled-in poses a challenge. With the headstrong Kendal Python, “Late in his career, every year, trying to bring him back was worse and worse and worse. Sometimes he would jog a mile and that was it. You had no choice — he was coming off the track. He had a quota, and that was it.”

As Kendal Python raced into his teen years, his craftiness became a headache for his trainer and occasional driver. “At the end of it, he got to be… I guess the nice word for it is ‘sour,’” said Lilley. “He knew me by the book and wouldn’t try for me at all. I probably should have quit with him after that [Clash of the Iron Horses].” The teenaged gelding’s attitude toward his job had changed, making Lilley’s more difficult. “But I’ll tell you what he taught me: how to keep a horse fresh. Because with him, you had to keep changing things up all the time: bridle, bedding, stall location…”

Kendal Python went winless in his final season on the track, which concluded at Truro Raceway on December 21, 2008. He recorded his last victory the previous August, with Lilley driving, at Red Shores Charlottetown. Today, the “Iron Horse” is an occasional saddle horse and “really, really good with babies” from Lilley’s broodmares. “He’s pretty much boss here,” said his proud owner. “I’d like to take him on a trail ride sometime, because he’d probably really enjoy it.”

The calendar is now more important than the teletimer for the still-racing foals of 2005. Owners of active 14-year-olds can watch industry media for a chance to send them out in style: A call for entries to Monticello Raceway’s 2019 Au Revoir race will circulate next month.