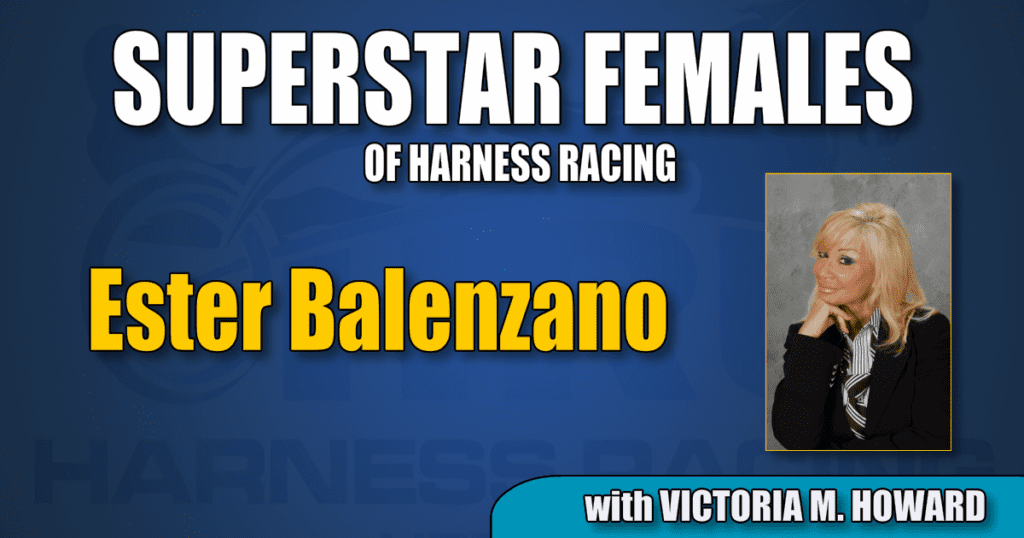 Most things in life that are successful require a good team. Harness racing is no different.

There’s the trainer, the caretaker, the athlete (horse), the racing officials, the fans and bettors, and the owners. There are different reasons why people spend their money on purchasing a racehorse. Of course, it’s hopefully to make a profitable investment, but many just want the thrill of owning a winner and perhaps a world champion.

Owners pay the bills (which can be costly), visit their four-legged kids, cheer their horses on when they race and bring goodies to the barn as they continue to dream of hopefully getting that superstar.

One of these people is a woman named Ester Balenzano. She began her journey in the mid-‘70s, racing mainly at the New York tracks.

“When I started dating my husband, Luca, he introduced me to harness racing and I have been involved ever since. The first horse I owned was named Diamond Time — and we know that all women love diamonds,” Balenzano said, laughing.

“The very first horse Luca and I bred was Gemboa. He raced in the ‘80s and did very well for us, winning many, many races at Roosevelt and Yonkers.”

Throughout the years, the Balenzanos have bred and owned many horses and were some of the lucky ones to be involved when the sport was at the top of its game. The couple raced mainly at the great Roosevelt Raceway and had some of the best reinsmen such as Carmine Abbatiello and Mike Lachance drive for them.

I asked Ester who she considered was the best driver today and she answered, “Currently my favorite driver is one that doesn’t beat up my ‘Boy Wonder.”

The Boy Wonder she’s talking about is none other than Melady’s Monet— Balenzano’s 10-year-old millionaire trotter.

“In 2009, we were blessed with Monet’s birth. Little did we know at the time how great this little boy would turn out to be. Unfortunately, we could not get Keystone Melady back in foal, so we adopted her out to two gentlemen who lived in Tennessee.”

Melady’s Monet is a homebred that has earned over $1.5 million dollars during his racing career, and today at the ripe age of 10 is still crossing the finish line first.
In 2019, Monet has earned $194,370 and won eight races, with the fastest winning time in 1:52.4.

During his lengthy career, the Revenue S gelding has won a total of 60 races.

Three years ago, Monet won the Vincennes Invitational on Hambletonian Day at the Meadowlands. In 2015, Monet was invited to compete in The Elitlopp, but the Balenzanos graciously turned the invitation down due to the horse’s occurring major tie-up issues.

The Balenzanos thought more of his safety and health first than the bragging rights of having their horse race in the Elitlopp.

Having been in the sport for decades, I asked Ester her opinion on the sport’s decline.

“In the ‘70s through the late ‘80s, the sport was phenomenal. Sadly, it is very different today. I personally don’t like to see stake races with 3-4 entries from the same stable.

“Years ago, at the most you saw a ‘coupled’ entry from the same barn, but today it’s not like that. It sort of makes those races uninteresting. I also don’t like handicapped races. It’s like getting penalized for winning a race. I think there should be a draw — the way it was many years ago.”

Currently the Balenzanos own one horse, and that’s Melady’s Monet.

It’s not the quantity, but quality, and one is all they or anyone would need if they were lucky to own a horse like Monet.
“Our Boy Wonder is still going strong and we could not be prouder. Monet loves to race and get his picture taken in the winner’s circle, and if he’s up to it — which is almost always — all the driver has to do is take the lines, and our boy will do the rest. He loves to race and win and the drivers all say when he is in a hole he can’t wait to get out and into the action.

“To think we could ever wind up with another Melady’s Monet is impossible, so we are enjoying this ride and are so blessed to have him and truly enjoy every race.”