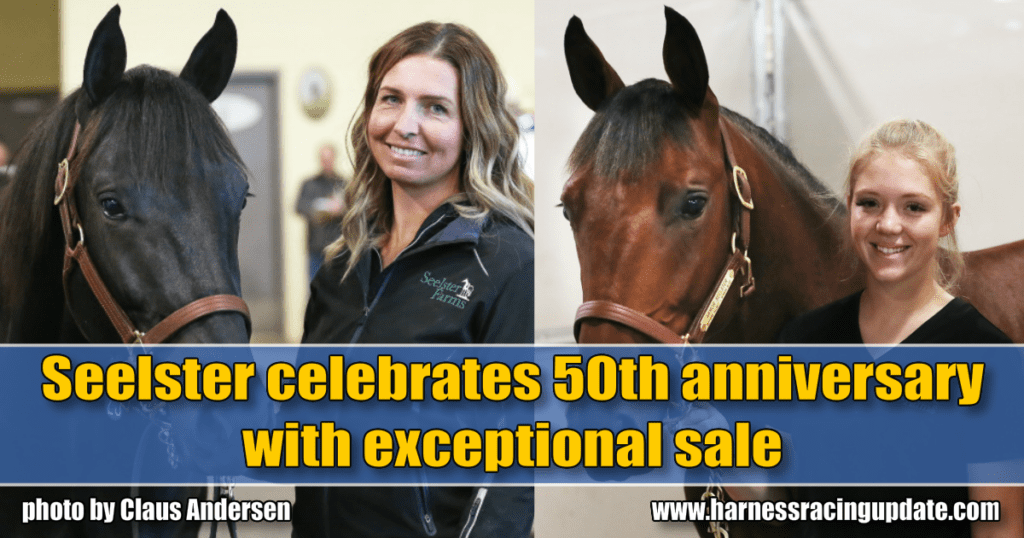 The Lucan, ON farm grossed over $1.8 million over two days at the third annual London Selected Yearling Sale, which concluded Sunday with the average down 4.6 per cent and the gross down 11 per cent from a strong 2018 auction.

Karen Favacho, the farm manager of Seelster Farms, said she couldn’t imagine a better way for the Lucan, ON nursery to celebrate its 50th year than to post outstanding results at the London Selected Yearling Sale which concluded Sunday at the Agri-Plex facility at the Western Fair District in London, ON.

After setting an all-time record for a yearling sold at a Canadian auction on Saturday when Marlboro Seelster fetched $270,000 from Dr. Ian Moore on behalf of Jeff Snyder of New York (full story here), Seelster topped Sunday’s session with a Bettors Delight colt out of Winbak Alice named Armor Seelster purchased by Adriano Sorella of Guelph, ON for $95,000.

“We put in a lot of hard work,” said Seelster’s veterinary technician Tina Marie Howard. “It’s nerve-wracking just before the sale, but it’s exciting to see how it all plays out in the end.”

Assistant farm manager Walter Parkinson said the farm’s average of $39,149 was higher than its average in 2018, but lower than 2017.

“I think it’s the second-best average ever for Seelster,” Parkinson said, adding the Seelster team is buoyed that its horses can sell so well in Ontario. “I think it says a lot, that buyers are willing to come to London and purchase the best that money can buy.”

She said the Seelster staff heard from buyers that they liked the updated pedigrees on many of its yearlings.

“We have fresh mares,” Favacho said. “We also got so many comments this year on how our horses looked. They thought they were exceptional-looking horses and I think that makes them feel confident to purchase them and feel confident that they were raised the right way.”

Now the Seelster principals must decide how best to reinvest the money it earned from the sale.

“I’m pleased with the sale. I was hoping that the momentum would have carried more into Day 2 after such an outstanding Day 1, but an average of $21,000 is still a good average and I’m hoping that we can build on that for next year,” said sale manager Ann Straatman. “I have to give credit to our auction crew and to our management staff in the office. It’s truly a team effort to put together such a high-quality sale and hopefully next year we can even do better.”