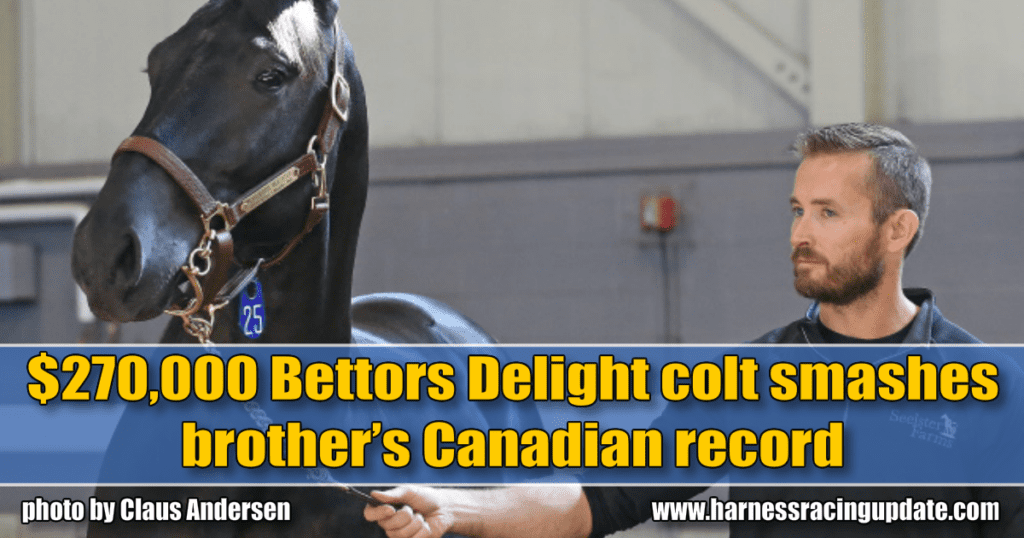 Marlboro Seelster becomes the most expensive yearling ever sold in Canada as day one of the London Selected Yearling Sale is on par with the 2018 opening session average of $28,370.

Two years ago, Mohawk Seelster set the record for the most expensive standardbred yearling ever sold in Canada. On Saturday, his younger brother did him one better at the London Selected Yearling Sale at the Agriplex at The Western Fair District in London, ON. Marlboro Seelster, a Bettors Delight colt out of Macapelo Rose, fetched a bid of $270,000 from trainer Dr. Ian Moore on behalf of owner Jeff Snyder of New York, NY.

“London is excited to hold the Canadian record for the highest price yearling to sell. He is by a proven quality sure, Bettors Delight, and from a great maternal line. Buyers are very confident in those types of purchases,” said sale manager Ann Straatman.

Seelster Farms bred and consigned both colts and Moore said that was key in his purchase decision. He said he likes buying from Seelster Farms because they raise nice yearlings and the Lucan, ON operation does not retain any of its yearlings to race.

“I like that they sell everything and I think that matters to other buyers, too,” Moore said.

Moore led all buyers, both as an agent for Snyder — thanks to the session-topper alone — and solo with $170,000 spent on three yearlings.

He said he was encouraged that Snyder wanted to buy in Ontario and said the bright spot is Snyder would get a premium on his U.S. dollars buying in Canada.

Marlboro Seelster is a half-brother to Mach Three filly Mayhem Seelster trained by Tony O’Sullivan. Mayhem Seelster was third in the 2015 Breeders Crown final for 2-year-old pacing fillies (won by Pure Country) and earned over $300,000 in her career.

“We’re thrilled with Day One at the sale,” Straatman said. “We had a super crowd and enthusiastic bidders. The London Selected Yearling Sale continues to prove that breeders can sell Ontario-sired yearlings right here at home in Ontario for outstanding prices. (Sunday’s) roster is every bit as exciting as (Saturday’s) offerings, so we look forward to seeing everyone back at the Western Fair Agriplex.