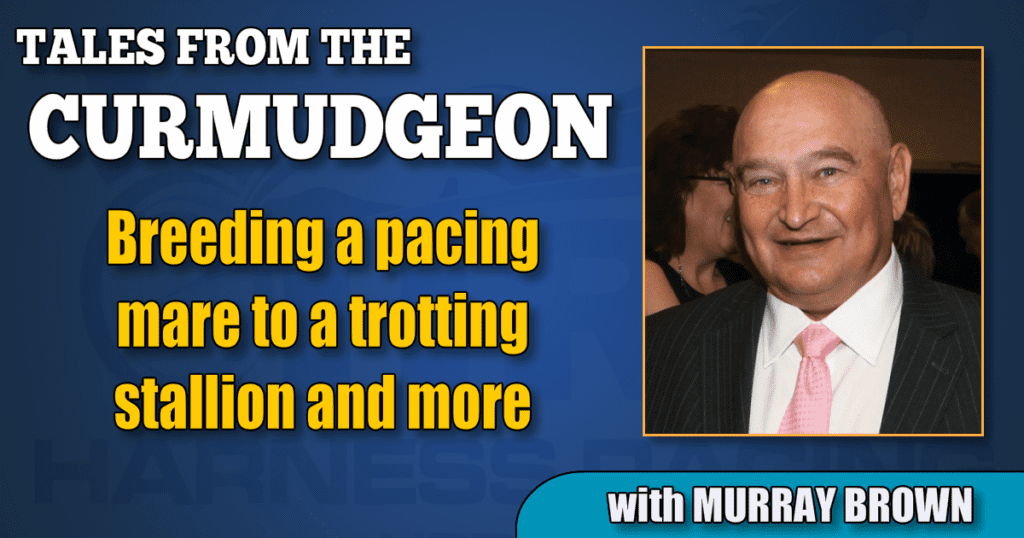 Breeding a pacing mare to a trotting stallion, remembering when Hanover auctioned two yearling fillies simultaneously and thoughts on the legacy of Bettors Delight

In last week’s column, I neglected to give credit to the one person, perhaps more than anyone, who helped me on any road to success I’ve enjoyed in this business.

Without my long-time loyal and incredibly efficient assistant Vivian Jewitt, any success that I might have achieved would have been diminished, if not totally eliminated. Vivian is the very best.

This column was written before day one of Lexington, which took place last evening.

I don’t think that there are many, if any, who do not believe that, at least on paper, this represented the greatest single day’s offering in the history of harness racing.

The pedigrees of this group of yearlings as a single offering are without precedent.

Knowing that the individuals were individually judged by my two knowledgeable friends Randy Manges and David Reid gives me reason to believe that they, almost without exception, were at or near the top of the class in terms of individuality.

Best of luck to everyone who bought them and to those who will be buying yearlings through November.

There is no question that Bettors Delight is among the greatest stallions in the history of not only harness racing, but of any equine pursuit.

He leads all breeds by a large amount as the greatest money-producing sire in equine history.

If only USTA and/or Standardbred Canada would add his Down Under earnings to those achieved by his offspring in North America.

He consistently sires great colts and fillies and has done so every year that he has stood at stud.

His offspring are generally among the most durable of any stallion around. They keep racing to ripe old ages and generally stay pretty sound.

Most amazingly, he is arguably enjoying his most successful year at the ripe old age of 22.

Yet, despite all these great attributes, he can be a breeder’s nightmare.

When you breed to him, you don’t know what you are going to get.

In the majority of cases, you will likely get a smallish, plain-looking individual who is generally correct, but who’s appearance will often belie the speed inherent lying underneath.

They often do not sell nearly as well as they should.

Occasionally, you will get a good sized, strong, great looking individual like Tall Dark Stranger and the breeding will pay dividends. You can also get a flashy, medium-sized horse like Betting Line who will also pay its way.

Ironically, Bettors Delight’s sire Cams Card Shark, also a great but often under-rated stallion, had similar problems when they sold as yearlings, not because they were small, but largely because they were deemed unattractive, with a good many of them not having the prettiest of heads and being benched kneed.

Rene Allard said that he was considering breeding a good Western Ideal pacing mare that he owns to a top trotting stallion.

The mare herself was a very good race mare. She has had three foals of racing age, all by pacers, who are decent pacers.

Rene said that the mare herself showed an inclination to trot and he had trained her on the trot in 2:10.

He asked what people thought of the idea. The vast majority of the people who responded said, “Don’t do it.”

I felt I wouldn’t do it if I owned the mare, but if Rene was willing to take the gamble, then why not?

Rene said that he had made up his mind and that he was going to do it.

I mentioned that Norman Woolworth bred the terrific pacing mare Glad Rags to Nevele Pride and got the wonderful racehorse and sire Zoot Suit.

The discussion went on to which trotting stallion the mare should go to.

Rene said that the mare toed out and he would like to stay away from a stallion that toed out. That would eliminate Muscle Hill.

Yannick Gingras said that he thought Father Patrick would be a perfect cross. I certainly did not disagree. My feeling is that Cantab Hall, his son Father Patrick and FP’s son Greenshoe would be strong candidates.

Rene later asked what would happen if you bred a pacing stallion to a trotting bred mare?

I said that has been done far more often and very successfully than the reverse.

At the time, Hanover had very few, if any, pacing bred mares. So Billy Direct was bred to trotting bred matrons who I suspect had a tendency to show some pace.

Billy Direct’s greatest son was Tar Heel, who was out of a trotting bred mare. So were top notch horses such as Ensign Hanover and Direct Rhythm.

Many of Tar Heel’s best performers, especially in his early years at stud, were out of trotting bred mares. Thus they were three quarter trotting bred pacers.

What does all this prove?

I have no idea, other than if one doesn’t try, one will never know.

Q. I was curious about the days when Hanover would parade two yearling fillies in the ring and the winning bidder chose the one they wanted. Whose idea was it? Were you a fan of it? Why was it stopped?

A. I take full blame and responsibility for it.

Let’s digress to the time when it began; actually to a few years before.

At the time, Hanover generally retained anywhere from six to a dozen of the best bred fillies. They would be put into training and then after racing, they would become future broodmares. Of course and probably with justification, this put a negative pall on the rest of the fillies that were to be sold at Harrisburg. There were no secrets about which fillies were being retained. Their names and pedigrees were printed in the private Hanover catalog.

The prevailing thought was, “They are keeping the best, we only have a chance to buy the leftovers.”

I remembered reading about Canadian thoroughbred breeder E P Taylor having a policy where he pre-priced all of his yearlings.

When and if half of them were sold, he would retain the rest.

For example, when the great Northern Dancer was a yearling, he was priced at $20,000. Fortunately for Mr. Taylor, there were no takers.

I thought to myself, “Why can’t we do something similar with our yearling fillies?”

Instead of pre-pricing them, we could put them together as pairs of as close to equal value as we possibly could.

The buyers then could be assured that they had the opportunity to buy any filly in the consignment.

People could not say that that Hanover was knowingly keeping the best, because they had the opportunity to bid on and buy any filly.

On the other hand, Hanover would still be able to retain a good number of well-bred fillies to eventually put into its broodmare band.

I thought it was a win, win idea. I took it to John Simpson Sr. At first and for a couple of years he just scoffed at the suggestion.

He said words to the effect that we would be creating a circus atmosphere. My response was “What’s wrong with that”?

I persisted for some time as our yearling fillies continued to bring low prices.

Finally, he gave in, more to get me off his back I think and said: ‘Let’s talk to Tom Caldwell (our auctioneer) and see what he thinks.” Tom thought it was an exciting idea and we went with it.

Tom did bring up one minor question: “What do we do if the winning bidder decides he wants both fillies?” Mr. Simpson said, “We’ll decide what to do if we are faced with the situation.” Thankfully no one ever did.

It was highly successful. Both ours and the goals of our customers were met. The excitement level in the sales arena was palpable.

We discontinued doing it when the philosophy of management changed.

It was decided that we’d be better off not training nor racing any horses, thus eliminating the likelihood of competing against our customers.

Instead of retaining fillies that might or might not be successful on the racetrack, it was thought the farms would be better served by purchasing already made race fillies and racemares either at public auction or privately.

It accomplished two things. It eliminated the probability of competing against our customers. It also helped to diversify the makeup of the broodmare band by infusing new blood and in some cases new families.