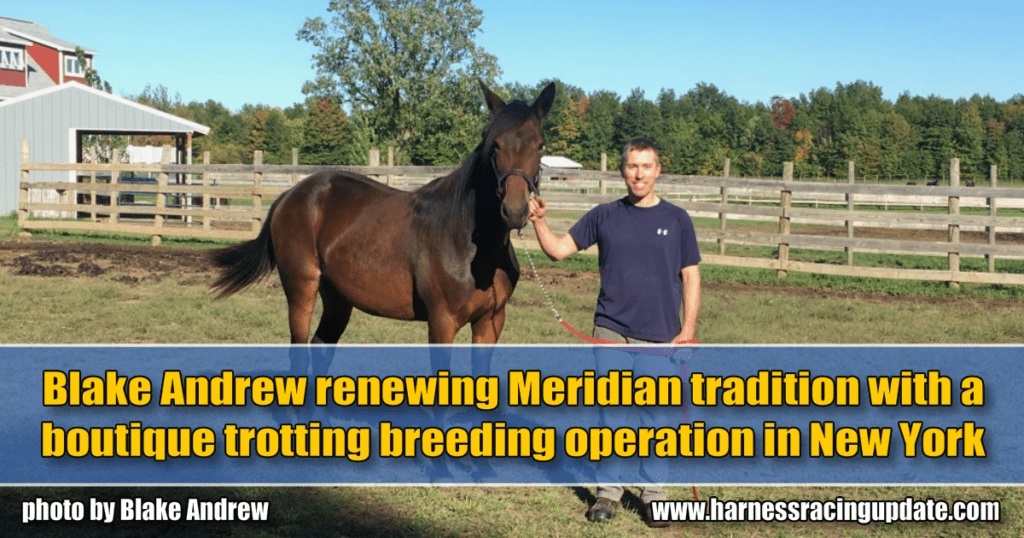 Fourth-generation horseman Blake Andrew of Meridian Farms fame is renewing the family standardbred tradition with a boutique trotting breeding operation he built from the ground up in upstate New York.

In early September, Bill Andrew announced that his Meridian Farms West would be sending one final crop of yearlings through the Alberta Standardbred Horse Association (ASHA) sales ring in 2020. The High River, AB standardbred nursery is in the midst of selling off broodmares and cutting back on stallions, although Andrew is still standing stallions in PEI and Alberta, as well as racing horses in the Maritimes.

This news seemed to mark the end of an era, particularly after a previous announcement that Meridian Farms East would cease operations. The decision came after the December, 2018 passing of 70-year-old horseman Brian Andrew. Bill Andrew’s brother oversaw day-to-day operations at the Milton, PEI farm, which brings its last group of yearlings to the Atlantic Classic Sale on Oct. 11. (The two pacers and three trotters are consigned under the Estate of Brian Andrew).

On the surface, the scaling back at Meridian East and West looked like the end of an era. But in a remote part of upstate New York, at geographic coordinates of 44.9864° North, 73.4465° West, the familiar name is experiencing a small-scale revival.

Blake Andrew owns and operates Meridian Trot, located in Champlain, NY. The path that led him to establish a boutique breeding operation is a lifelong road, originating in his own bloodline. “My dad, Brian, was running Meridian Farm PEI, so I grew up a fourth-generation horseperson,” he told HRU. “I was very involved in PEI for quite some time, and grew up around the farm as well. (Then) I went off and I became a college professor, as did my wife, who I met in Montreal.”

Working in Montreal, Blake and wife Allison were far from the nearest racetrack, and far from able to afford raising racehorses on expensive land near the city. “We lived there for quite a few years,” said Blake. “I was teaching at Concordia University, but we would spend our summers in PEI. I would race (family horses) and help with the breeding farm as well. It was always kind of in the back of my mind to have my own place and try racing or breeding or both.”

In 2014, Blake and Allison, who is a U.S. citizen, decided to pursue that dream. “So we started looking on (the American) side of the border, because horse racing in New York is pretty strong,” Blake said. “You have to breed in New York to be eligible to the NYSS, so it all made sense.”

Not everyone would want to build a standardbred breeding farm from the ground up, but that’s exactly what Andrew did. “I wouldn’t recommend it, but we found a vacant parcel of 50 acres and said, ‘Okay, let’s start from scratch,’” he said, chuckling at his own naïve enthusiasm. “We were really happy with the piece of land, and I went, ‘Okay, this isn’t going to be too hard.’ But it took a while. We built the house, built the barn, pastures, water, run-in shed…” He was still teaching full-time in Montreal at the time, but tackled the construction solo.

It took five years for Blake Andrew’s dream to reach fruition. “(We started) in 2014, and my first yearlings are in the sales now,” he said with pride. “I started really small, to give them the full attention they need, while I was still building things. At this point, I’m pretty close to being done building, thankfully, and now the question is whether I’ll scale up a little bit or keep it small.”

The venture is a radical departure from Blake’s former job, teaching political science and statistics for the social sciences at Concordia University. “I use a little bit of that background,” he said. “I think a lot about breeding analytics, and I care a lot about pedigree matching and that kind of thing.” His wife still teaches at Université du Québec à Montréal, because Meridian Trot is right along the Quebec-New York border, making her commute manageable.

Andrew has chosen to focus exclusively on trotters. “I have a lot of experience with both sides, but trotters have always been my favorite, and I just figured if you’re going to be a small-scale breeder, you’ll want to specialize a bit,” he said. “The trotting has more international possibilities, and it’s really strong in New York State.”

The first Meridian Trot yearling to step into the sales ring was Honey Trap, who brought $10,500 as Hip #40 at the Morrisville Yearling Sale on Sept. 15. “She is out of a mare that my dad and I raced in Prince Edward Island, and then eventually moved here: Honeymoonisover (2, 2:02.3h, 3, 1:58.3s; $132,552). So there’s kind of a sentimental side to her as well,” said Blake. The firstborn foal of the 2013 PEI Standardbred Horse Association’s Trotting Mare of the Year was purchased by Chris Lawton, of Vernon, NY.

While disappointed that sire Lucky Chucky has unfairly “had a tough go” in building a reputation at stud, Andrew said he is satisfied with Honey Trap’s selling price, and more than satisfied with the filly’s conformation, gait, and attitude. “I think and I hope that she will make the races — everything I saw from her suggests she will, and I’m looking forward to seeing her next year, somewhere nearby.”

The nearest track to Champlain, NY is Saratoga Harness, which is over two hours away, but the Meridian Trot founder said his family will be “on the lookout” for Honey Trap whenever she races. “I have a couple of young daughters — I have a 6-year-old (Joyce) and a 2-year-old (Leta) — and both of them were a little sad to see Honey Trap go. We tried to explain to them: That’s how this operation works. There will be new ones.”

Blake is also sending his first two Harrisburg yearlings to the Pennsylvania sale this fall, consigned by David Reid’s Preferred Equine Marketing, as was Honey Trap. Hip #864 is a New York-eligible filly by Lucky Chucky out of the unraced Yankee Glide mare Female Drama.

“Sheriff Callie was named by Joyce because Sheriff Callie is a Disney character. Google it, and you will see an animated series that she loves,” Blake said with a laugh, before turning to the serious business of pedigree. “I thought a lot about that cross, the cross is what I wanted with that particular mare.” Female Drama’s son by Trixton, No Drama Please (2,1:54.3; BT1:52; $152,926), was recently fourth behind winner Gimpanzee and place-finisher Forbidden Trade in the Yonkers Trot.

The third Meridian Trot yearling is Hip #791 at Harrisburg, PA-eligible Lights Out Alice. “My feeling is she’ll be the one people look at the most, based on the page, but also she’s a really nice individual as well. She’s long and all trot in the field. She’s clean-legged,” said her breeder. “It’s a family that I’ve had my eye on for a number of years. One of my favourite families.” The filly is by Muscle Massive and out of the Credit Winner mare Betweentwopillows (3,1:59.3f; BT1:59; $33,361), who has one previous foal, Cantab Hall filly Stuck Inthe Middle (2,Q2:04.3f; $5,040).

Prior to Brian Andrew’s untimely passing, Meridian East had made history, raising and selling the highest-priced trotting yearling ever sold in the Maritimes. Credit Winner colt Mack Truck (2, 2:08h; $8,347) drew a top bid of $26,000 at last year’s Atlantic Classic Sale in Crapaud, PEI. Not much by Harrisburg, Lexington, or London standards, but a significant price in a region with limited racing for trotters. He was purchased by Donna Van Meer of Bowmanville, ON, and is a stakes winner this season in PEI.

Mack Truck’s dam Mad Over U Hanover is one of the four trotting broodmares Blake and his sister, Ontario-based trainer Rachel Andrew, is currently handling as part of their late father’s estate. The others are Lyrical Lindy (4,1:59.3f; $46,672), Apeachtoremember (7,1:55.1f; $289,735), and Tymal Maroma, who Blake called “one of the top two or three trot broodmares in the Maritimes.” Bill Andrew purchased Tymal Maroma as a 2-year-old, and the Angus Hall mare helped Meridian East rebuild the trotting breed on Canada’s East Coast. Her first foal, Tyne Valley (3,2:00.3h; $52,894), was the top-priced Atlantic Classic trot yearling back in 2014, selling for $10,000. In 2016, her colt Ticked broke the record price for a Maritime-bred trotting yearling when he sold for $12,000.

“Meridian East” is conspicuously absent from the 2019 Atlantic Classic sale catalogue, replaced by “Estate of Brian Andrew” as consignor of the farm’s last five yearlings. The sale preparations have not been easy for Blake or Rachel Andrew. “It was really sudden, what happened with dad. Initially, we thought, ‘Well, let’s disperse it all, and be done with it,’” said Blake. Then he and his sister decided to complete their late father’s work, in a manner respectful to the legacy of Meridian Farms. “We are seeing the cycle through. The foals that (Brian) foaled, we are putting them through the sale. The mares that were in foal, we foaled them out and have a few weanlings around, so we’ll move them. Then the mares will find either homes with us or somewhere else.”

While Meridian Trot is unaffiliated with Bill Andrew’s Meridian West, Blake Andrew said his Cam Fella Award-winning uncle’s advice has proved prescient in starting his own upstate New York farm. “He, and dad for that matter, were both: ‘Go and try it, but it’s going to be tough.’ And it has been tough, but they’ve been very supportive.”

Now 40 years of age, Blake envisioned the future differently when he began Meridian Trot in 2014. “I always expected that dad would wind things down there (in PEI) slowly, and I maybe I could have coerced him into coming and helping me, but that’s not going to happen.” Instead, the self-reliant young standardbred breeder is counting on his first group of yearlings to carry the Meridian name and quality forward.

Blake Andrew will be at Harrisburg, watching in the background as the Preferred Equine team introduces Lights Out Alice and Sheriff Callie to prospective buyers. “I’m hoping that people will take a look, and at least a few of them will really like them,” he said. “I feel like they’re competitive, and they’ll probably make it and hopefully do well.”

In geography, a “meridian” is defined as a line of longitude. “Meridian” shares a similar definition in harness racing circles: The contributions of the Andrew family line, with a longevity spanning four generations and counting.