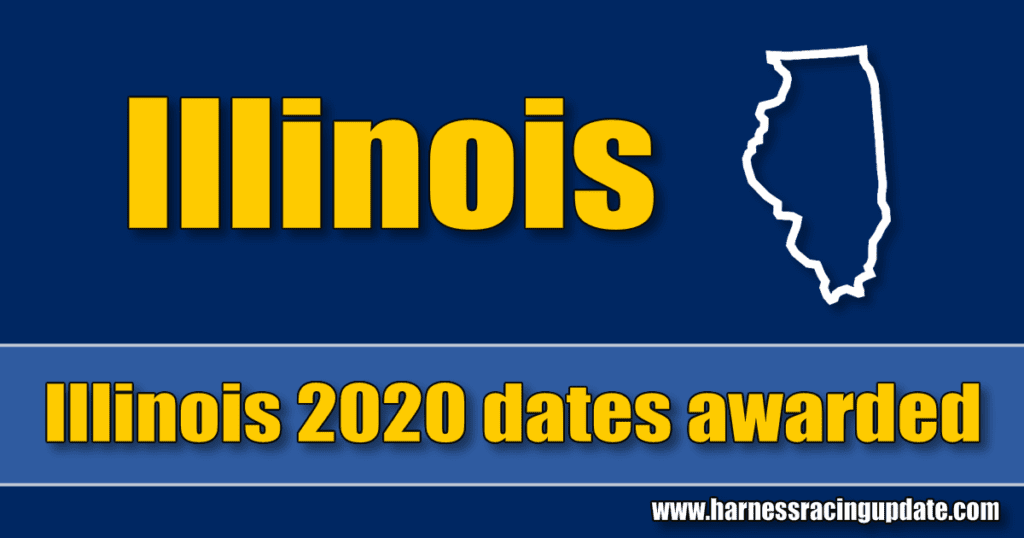 Following a week of uncertainty, the Illinois Racing Board on Tuesday approved the 2020 dates applications of Arlington International Racecourse, Hawthorne Race Course and the proposed new harness track in south suburban Chicago.

Hawthorne President Tim Carey decided not to hold the track’s traditional spring thoroughbred meeting next year in order to accelerate the daytime construction of its casino that he hopes to open during the 37-program fall thoroughbred meeting, running from Oct. 2 through Nov. 28.

The new Playing in the Park, LLC. harness track/casino that Rick Heidner is planning to build in south suburban Tinley Park was awarded a 12-night inaugural meeting from Dec. 6-29 with racing on Sundays, Mondays and Tuesdays. Carey is partnering with Heidner in the venture.

Arlington was awarded 68 days of thoroughbred racing from April 27 through Sept. 30.

Much to the consternation of thoroughbred horsemen and the Racing Board, Arlington has declined to apply for the casino license that it is entitled to under the massive Illinois gambling expansion bill that was passed during the spring session of the legislature and signed into law by Gov. J.B. Pritzger in June.

That controversial decision put Arlington and its parent company, Churchill Downs, Inc. (CDI), on the firing line the previous week when the dates hearings began.

Adding to what Racing Board chairman Jeff Brincat called “the controversy and chaos” was an August statement that coincided with the rejection of a casino at the track in which CDI Chief Executive Officer Bill Carstanjen said the corporation is committed to conducting meetings at Arlington in 2020 and 2021 but beyond that left the future of the track shrouded in uncertainty.

No representatives of CDI were present at the Sept. 17 hearings and Arlington president Tony Petrillo didn’t have the answers to the hard questions hurled at him by Brincat and board member Tom McCauley.

The board recessed the hearings until Tuesday and demanded that a CDI representative be present to testify.

The delay fueled speculation that the board might deny Arlington 2020 dates, thereby necessitating major changes in the harness and thoroughbred schedules that Hawthorne had applied for and disrupting the plans of horsemen of both breeds.

Consensus among racing insiders is that CDI’s stated claim that it is not pursuing the gaming license that Arlington had sought for decades is because taxes on it to fund purses are “financially untenable” is bogus and the real reason is to protect another of its holdings from competition. Late last year CDI spent $326 million to obtain a 62 per cent share in Rivers Casino, which is only 14 miles from Arlington and is the most profitable of the state’s existing casinos.

Brad Blackwell, CDI senior vice-president and general counsel, came to Tuesday’s meeting and was interrogated at length by McCauley. But Blackwell said what McCauley wanted to know was confidential corporate information.

With regard to the decision not to apply for a gaming license, he said: “We don’t have all the answers now. What we’re doing is trying to find the answers. We need time to figure this out.

“We hope the gaming bill works for Hawthorne, Fairmount Park and Rick Heidner. This is the fifth year of a joint agreement that we have with Hawthorne on dark times (revenue) and dates and it was signed on July 30 — after the signing of the gaming bill.”

The gambling expansion legislation won’t take effect until Jan. 1 so revenue from the casinos at Hawthorne, the new track in Tinley Park and the downstate thoroughbred track Fairmount won’t bolster their purse accounts until 2021.

That fact prompted the decision of the board to rubber stamp the 2020 schedule requested under the joint agreement between Hawthorne and Arlington.

“The agreement between the parties should have a lot of weight for 2020,” McCauley said. “There would be so much disruption for people’s lives if this schedule changed.

In complete contrast to Arlington, with regard to casinos Hawthorne is hot to trot. Carey applied for a license on Aug. 26, the first day for applications to be submitted.

“We’ve been waiting 15 years for this opportunity,” he told the Racing Board. “That is what it is all about. This is why we hung in there as long as we did.

“It will be a $450 million development. We hope to obtain approval by Dec. 26 and start construction the first part of January. The casino will be on the second floor and will occupy 4,000 square feet.

“Running these dates is a one-time deal. We’ll go back to a spring thoroughbred meeting in 2021. We will do whatever it takes for both breeds to gain by what we do. We hope to have a great 2020 fall thoroughbred meet coinciding with the opening of the casino.”

Bob Molaro, the former state senator and state representative who is employed by Hawthorne as a consultant, is just as enthusiastic.

“Tim is making sure that it’s a racetrack that has a casino, not a casino that has a racetrack,” he said. “This will kick start the south suburbs — there will be twice the number of jobs; twice the economic opportunity.”

Of the adjusted gross revenue at the racetrack casinos 12.75 per cent will go to purses.