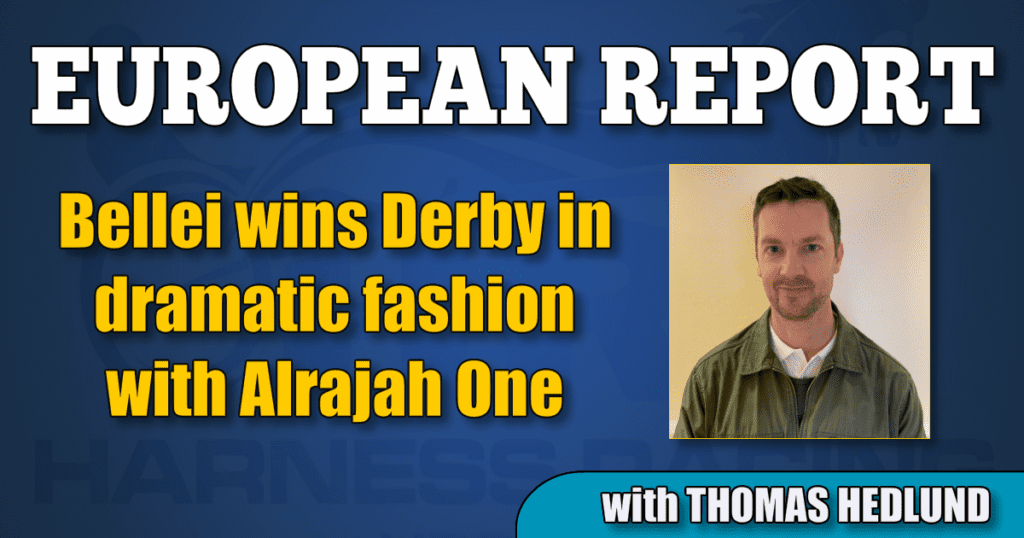 Bellei wins Derby in dramatic fashion with Alrajah One

The $931,500 Italian Derby for 3-year-old trotters was held in Naples on Sunday night and the race became eventful.
Alessandro Gocciadoro had the favorite in Axl Rose (Love You) and the duo came to the lead at a pretty early stage when stablemate Amon You Sm, paired with Antonio Greppi, willingly let the lead over to Axl Rose.

Everything looked safe for the favorite, but a sudden break with a half mile to go in the 1.3 miles long race, spoiled Axl Rose’s chances to become a champion of the 2019 Derby. Axl Rose more or less stumbled himself to a break and all of a sudden, Amon You Sm was in the lead again.

Behind the new leader, champion driver Enrico Bellei steered Alrajah One (Maharajah) and the duo had plenty of time to find themselves out when first over trotter Aramis Bar couldn’t keep up with the pace in the last turn.

Bellei let Alrajah One attack the leader seriously at the top of the stretch and the son of Maharajah easily sprinted to safe win in mile rate 1:56.4.

Amon You Sm finished second, ahead of Antony Leone.

In the $169,300 Gran Premio Turilli, Alessandro Gocciadoro had another chance to capture a big trophy and his weapon this time was Vivid Wise As (Yankee Glide), who came from an impressive win in Cagnes-sur-Mer in August, where the Yankee Glide son won a mile race in 1:50.2.

Over the distance of 1.3 miles, Vivid Wise As took a clear victory from the lead and his opponents were never close to him. The mile rate was 1:55 and Vivid Wise As is now three out of three for Gocciadoro.

The $278,000 Oaks del Trotto for the 3-year-old mares was on the race card in Naples the same day and Walter Zanetti trained Audrey Effe (Up And Quick) took a solid wire to wire win in a moderate 1:58.1 mile.

This was the ninth consecutive win for Audrey Effe, who is 10 out of 12 in total in her career, so the harness racing fans in Europe will surely meet the mare in some bigger objectives in the future.

Two eliminations for the $440,000 Grand Prix de l’U.E.T., The European Derby for 4-year-old colts and mares, were held at Vincennes racetrack on Tuesday afternoon.

There was $65,000 up for grabs in the two races and it was two brilliant trotters who made their way to the final, which is set at Vermo racetrack in Helsinki, Finland on Oct. 12.

Sébastien Guarato’s champion Face Time Bourbon (Ready Cash), paired with Björn Goop came to the lead in a half mile mark of :54.1 and the dominant 4-year-old then sprinted home in a 1:53.4 mile rate win over 1.3 miles.

In the second elimination, German bred Mister F Daag (Conway Hall) and Robin Bakker had everything under control from the front position and Mister F Daag posted a mile rate of 1:56.2.

Face Time Bourbon and Mister F Daag are both potentially elite horses and they will most probably face the already established top of the elite class next season.

Two more eliminations remain. The races are included in the Swedish V75 at Solvalla on Saturday afternoon. Swedish duo Campo Bahia (Muscle Hill) and Cab Lane (Muscle Hill) will try to get their spots in final and get company from Finland’s Derby winner Graceful Swamp (So Perfect) and Norwegian Derby winner Max Brady (Cantab Hall).

Muscle Mass son Muscle Hustle was exported from Canada to Sweden at the end of 2016 and as a 4-year-old, trainer Robert Bergh showed that he had a new horse that could be counted on in the big races in Europe.

Muscle Hustle impressively won a heat in Åby Stora Pris as a 4-year-old and finished second to Diamanten in Sprintermästaren same year.

Trainer and owner Robert Bergh decided late this summer that Muscle Hustle would be sent back overseas, where the horse was supposed to be trained by Åke Svanstedt. But according to Robert Bergh’s Twitter account, Muscle Hustle became sick during the journey to the United States and after 14 days of emergency treatment, the people connected to the horse decided to let Muscle Hustle forever sleep on Tuesday afternoon.