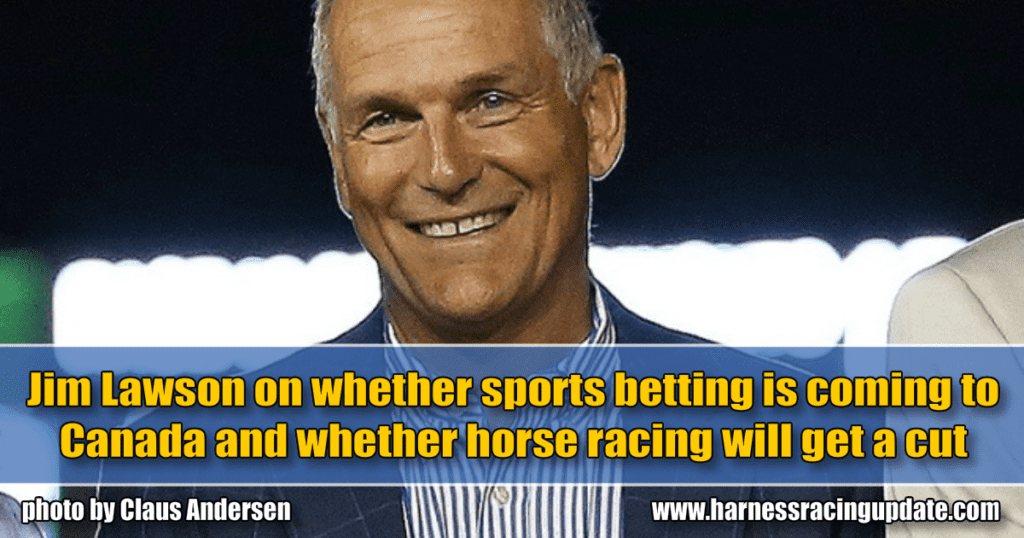 Is sports betting coming to Canada and will horse racing get a cut?

The CEO of the Woodbine Entertainment Group thinks sports betting will be a platform issue for this fall’s Canadian federal election and, if so, is already making the case that horse racing needs to get a cut of the action.

Woodbine Entertainment Group (WEG) CEO Jim Lawson said he believes legalizing single-game sports betting in Canada is gaining momentum and likely will be an issue in this fall’s federal election. The important part is ensuring horse racing gets a cut of the action if sports betting is legalized, he said.

“It’s going to completely cannibalize rural Canada and all of the racetracks and there’s a big cultural component in Canada of horsepeople and the horse industry and it will be substantially hurt if horse racing doesn’t have a role in sports betting,” Lawson said.

Though he stressed sports betting likely won’t be a major platform issue for any of Canada’s political parties in the election tentatively set for Oct. 21, the fact the U.S. Supreme Court approved sports betting in May of 2018 and the fact the potential revenue is too big to ignore is helping the issue gain long-needed traction north of the border.

“It’s clearly not a lead platform matter, but at the same time, the market in Canada may be anywhere from $12 to $15 billion,” Lawson said, adding a large cut of that action would help fight deficits in provinces such as Ontario.

“Much of the public is already (betting on sports) and they’re doing it off-shore,” Lawson said. “You’re always going to have people that have issues morally and ethically with gambling and sports betting and I understand that. Everyone’s entitled to their view… but I think that sports betting is generally acceptable and so much of it goes on today. It’s a $12 to $15 billion revenue source that I think the federal politicians are going to step up and pay attention to. So, it feels like it’s starting to gain momentum. I think the U. S. Supreme Court decision has been somewhat of a catalyst for that view of the federal politicians in Ottawa that either will be running or currently hold office and combined with revenue shortages, the world is just becoming more expensive and they’ve got to find a way to generate revenue. When you see that sort of potential revenue source, combined with the fact that much of it is going off-shore, I think there’s likely an obvious need to corral some of that revenue or the greater portion of that revenue. I think it’s going to grow substantially once it’s done legally and marketed properly, which cannot occur in this country today because it’s illegal.”

If sports betting does become legal in Canada, Lawson said Woodbine is well-placed to be a leader in delivering that gaming option.

“With our infrastructure across the country, with our 60 off track betting Champions lounges across Ontario, we have the bricks and mortar, we have the infrastructure, we have the systems, we have the finance people, we’re heavily regulated. We’re not approved as a gaming company today, but we have very stringent regulations as a gaming supplier. So, from an innovation and technology standpoint, we have 25 people working in our innovation and technology group today, we have a system that could form the backbone of sports wagering, we have a large finance department, we have a large marketing department. All we think we’d need is a strong partner that’s global, that does sports betting and joint-venture with them,” he said.

“The other case for Woodbine is we have a non-profit mandate, so anything we earn will go back into supporting jobs in the horse industry in this province if not this country. Whereas anyone else that I think has the capabilities will stick the money in their own pocket… we would put the money right back into the Canadian economy because we’re a non-profit. I think that’s really an important consideration that a Canadian non-profit with the skill sets that we have should play a role, especially when you think of the tens of thousands of jobs that it represents and the fact that if you don’t do it you really risk losing a good portion of those jobs.”