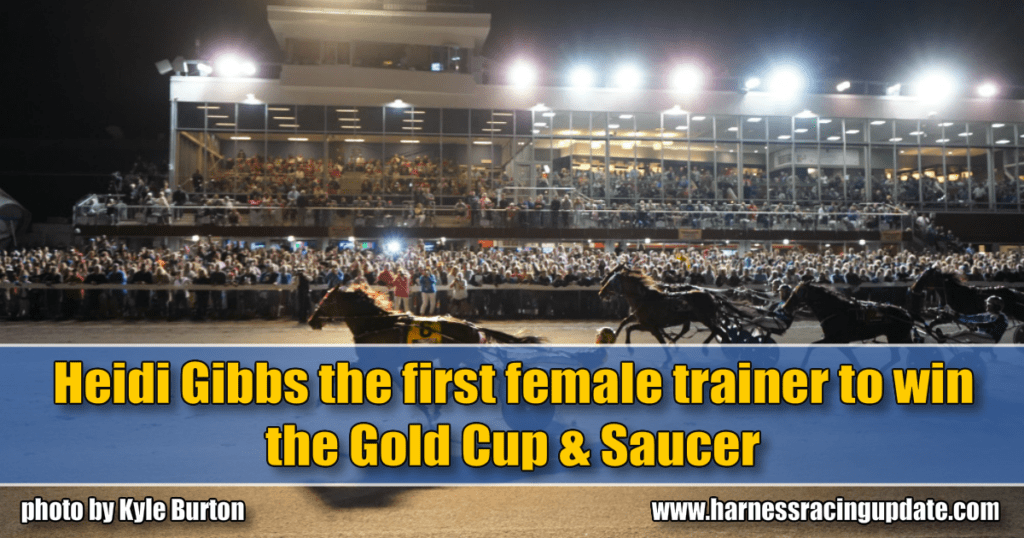 Prince Edward Island was affected by widespread electrical outages Thursday night after the races, and again before Friday afternoon’s first race went to post at Red Shores Charlottetown. Fortunately, there was no disruption to the Old Home Week racing, and no shortage of power behind the gate in the $60,000 Gold Cup and Saucer final.

Saturday night (Aug. 17), trainer Heidi Gibbs embodied “girl power” in becoming the first female trainer to capture the coveted trophy. “I’m overwhelmed — words can’t even express it,” she said as Mitchell Cushing slowed #6 Rock Diamonds N to a walk in front of the grandstand. “The whole thing has been amazing, from start to finish. I’m absolutely thrilled for our whole team back in Maine, everybody who made it possible for us to get to where we are today.”

Gibbs’ partner of 17 years, Ron Cushing, piloted #2 Bettors Fire N in the final, finishing seventh in the field of eight. “In the race, Louis was launching, trying to make things good for his horse. I did the best I could with mine, thinking about the ones behind us. It’s a great race. It’s just exciting,” he said as he joined his son in the winner’s circle.

Mitchell Cushing was surrounded by media, friends, fans, and family post-race. He arrived in Charlottetown on Friday, and was impressed by the attendance. “Even when I warmed up they were already yelling! That’s when you start to get the jist of it. It’s pretty cool,” he said.

Rock Diamonds N also noticed the strong crowd and the unusual degree of ceremony that surrounds the event: “He was pretty proud of himself warming up. He warmed up with no equipment on. Going around, bowing his neck right over, ears up — he was putting a show on. He knew what was going on.”

Cushing said his first, triumphant Gold Cup and Saucer drive was anything but expected, even in his own pre-race strategizing. “Most definitely not,” he said with a laugh. “You can only go so fast — only so many people can leave and get a spot.”

“When they left, and there’s three guys leaving hard on the inside, I could’ve maybe snuck a spot inside of Simon (Allard and #4 Somewhere Fancy), in front of Simon, but that’s a tough spot when they’re going that fast,” Mitchell said. “We just took a gamble at it. There was no plan when we took back in the eight hole… You let the horse take over and hopefully it works out.”

Closing from sixth at the three-quarters, Rock Diamonds N advanced rapidly (a :27.4 individual final quarter) through the stretch, hitting the wire one and a third lengths ahead of place finisher #4 Somewhere Fancy (Simon Allard), the 2018 Gold Cup and Saucer champ. Longshot #5 Lisburn (Ken Arsenault) was third.

In a successful effort he described as “just driving with reaction,” the younger Cushing credited Rock Diamonds N with handling a half-mile track with authority, a trait the pacer previously displayed with Ron in the bike at Yonkers. “He’s really straight; he doesn’t run in, he doesn’t run out. He’s just a really classy horse. No matter the size of track, it doesn’t bother him —he can ramble.”

The morning before the biggest race day of the year in the Maritimes, Gibbs said her step-son’s catch drive was something of a test drive: “Mitchell is excited to come up here and be part of this with (Rock Diamonds N). He’s never driven the horse before; Ronnie’s the only one to sit behind him so far.” The 6-year-old Rocknroll Hanover gelding took his lifetime-best mark at Plainridge just two weeks ago for Ron Cushing.

It was also Mitchell Cushing’s first visit to Canada since he was a boy growing up across the border, in Michigan. He said it will not be his last as a professional reinsman. Red Shores Charlottetown is very likely to see the Cushings and Gibbs return.

“If I have a drive or get offered, most definitely,” said Mitchell. “It’s not about the money. You’ve just got to experience this.”

Trainer Gibbs said she obtained her training license six years ago. She and Ron have a farm in Albion, ME, although they stable their racing stock at a training centre in Sidney, ME. “I’m fairly new in the game, but I’ve been around horses all my life,” said the winning conditioner. “We work together well as a team, and his son’s in the business, so that’s why our stable is RHM: It’s Ronnie, Heidi, and Mitchell.” The Maine-based couple’s well-regarded New Zealand-breds are both co-owned with friend/agent Frank Ranaldi, and Kevin Sywyk, another long-time friend from Ron’s Michigan days.

Rock Diamonds N and Bettors Fire N encountered trip difficulties en route to PEI. “About 7 or 8 Thursday evening we came in,” said Ron Cushing. “We had a little truck trouble coming in, and Don MacRae, who’s farm we’re staying at here, he saved me and bailed me out and towed my truck to a dealership the next day, got us back on the road. For a little bad luck, we’ve had a lot of good luck, just being with some nice people.”

Gibbs and Cushing’s duo were stabled at the farm of Don MacRae.

“From the minute we arrived until today, the people are just phenomenal,” Ron said. “This was our first trip here; I hope that we’ll be back.”