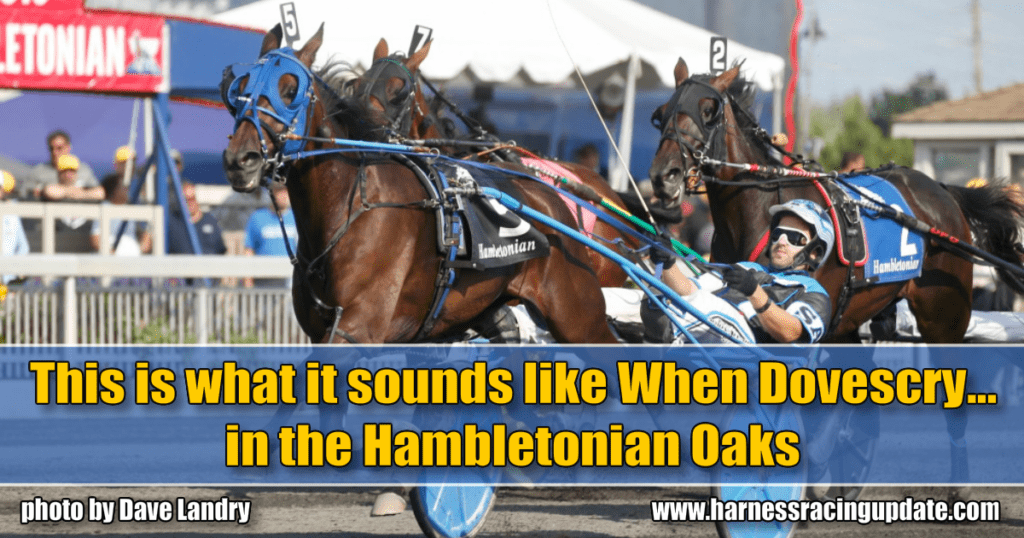 Last week, When Dovescry got her wheels in motion with a sensational performance in her Hambletonian Oaks elimination. On a picture-perfect Saturday afternoon at the Meadowlands, the 3-year-old filly was even better.

On July 27, Simon Allard and When Dovescry teamed to take their Oaks elim in what was then a career-best 1:51.3, a three-length score that put the daughter of Muscle Hill—Cedar Dove on the map and in the conversation for top honors in the $500,000 final.

That being said, the bay was facing some formidable trotting talents in the form of the previously undefeated (eight-for-eight) Millies Possession, and Evident Beauty, who were separated by a nose in their Oaks elim.

But on Saturday, the Rene Allard trainee, co-owned by Go Fast Stable (Ohio), Yves Sarrazin (Quebec), Kapildeo Singh (New York) and Lawrence S. Dumain (New York), was at the top of her game.

It was Southwind Casha, with Scott Zeron in the bike, who took command early, as When Dovescry, Evident Beauty and Millies Possession kept close tabs on the leader through an opening quarter-mile timed in :26.4.

Allard and When Dovescry got the jump on Millies Possession and Dexter Dunn, as the former duo pulled out and struck front, leaving their rival to take back in and sit third through a half-mile clip in :54.4.

As the field turned for home after three-quarters in 1:23, When Dovescry shrugged off the challenge of Millies Possession, and then opened up comfortably down the lane to record a two-length triumph.

Asiago rallied to take third, while Miss Trixton was fourth. The final time was 1:50.2.

“I was trying to go as fast as I could and not give them a chance to get close to me,” said Simon. “It’s such a fast track today, on a beautiful day. It seems like a lot of horses won on the front end today, so it’s speed, speed, speed and I really just let her roll, you know.

“When I stepped on the gas coming out of the last turn, I said, ‘I’ve still got something’ and that’s really good.”

The reinsman also had a little good luck charm in tow.

“I actually used Herve’s whip, the last whip he ever used,” said Simon, in reference to legendary driver Herve Filion. “Brandon (Filion), my buddy and my best friend, he told me, ‘You’re going to win it and I’ll let you use his last whip.’”

Prior to her elim and final victories, When Dovescry, last year’s Breeders Crown runner-up to Woodside Charm was winless in three starts at Pocono in 2019, all against conditioned company.

“She was ready. We’ve been racing her easy — easy qualifier, easy first three races,” Simon told Bob Heyden after the elim triumph. “We said, we’re shooting for the Oaks and today we just let her go to the front. They told me that she had been training super on the front end and I never put her on the front end yet, and we did it tonight, and they were right. She didn’t really want to get beat that way.”

One week later, a patient Allard allowed his charge sit second through the first quarter in the final, then let When Dovescry spread her wings at the perfect moment, a tactic that once again paid off with a trip to the winner’s circle.

“It’s very emotional,” said Simon. “We come from buying horses for $500 when we first started in the business and now we bought one for $200,000, it’s a big gamble and now this mare has made it and it’s great.

“I’m getting more and more confident about big races, but when I crossed in this big race, it’s pretty emotional. I don’t cry much, but I was pretty close.”

A wide smile on Simon’s face in the aftermath of the Oaks win said it all.

He still found a way to put it all in perspective.

“It’s everything. This is the best place for big races and big crowds and that’s what harness racing is supposed to be. It’s just such a feeling… sometimes you win big races at other tracks and it doesn’t feel as big, but here it’s packed today and it’s a fast time against the best drivers and best horses in the country. It’s just everything, you know.”

When Dovescry is out of 2011 Dan Patch three-year-old trotting filly of the year Cedar Dove (4, 1:52.3m; $1,178,930), an Andover Hall mare now part of the Hanover Shoe Farms broodmare band. Bought by Team Allard for $205,000 at the 2017 Lexington Select Yearling Sale, she was bred by the late William B. Weaver III of New Jersey, and consigned by Peninsula Farm.