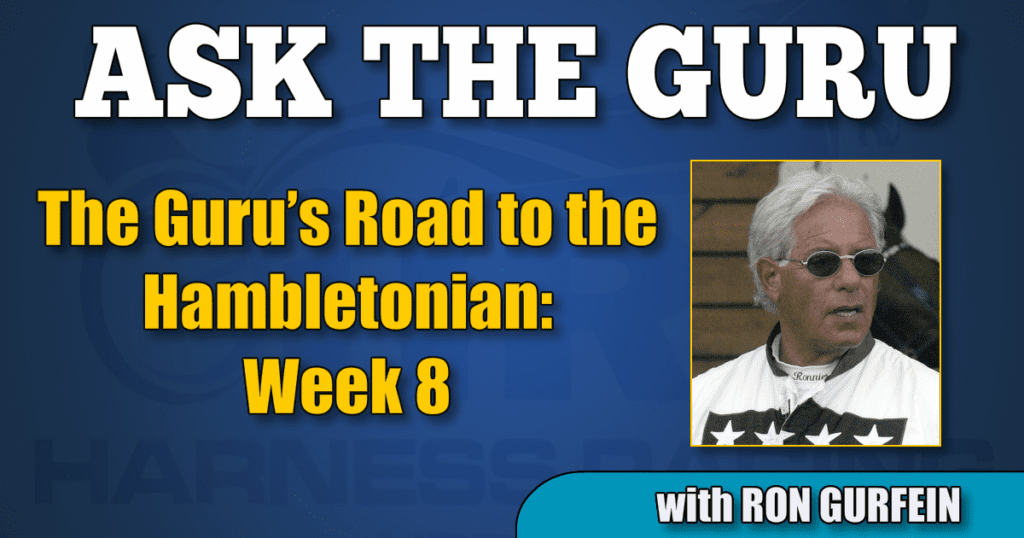 The Guru’s Road to the Hambletonian – Week 8

Blew the doors off a nice field in his elimination to the Beal and, despite traffic trouble, was coming like gangbusters in the stretch of last night’s Beal final, just missing by a head in a race won by Marseille in an upset in 1:52.3 on a “good” track.

Moved up last week off a stunning win in the Goodtimes final at Woodbine Mohawk Park. Obviously picking his spots with conservative handling before the big dance. Not in to go this week.

According to the “Baby Trainer” he is over some minor issues. He sure looked awesome in his elimination victory in the Beal. He finished third behind Marseilles and Greenshoe in last night’s Beal final.

Can you imagine Marcus Melander finishing 1, 2, 3 in the Hambletonian? Right now it wouldn’t be a shock. This colt continued his unbeaten streak crushing a field in a NYSS non-betting event at Yonkers Raceway in 1:55 on Tuesday. This gets harder for me to say every week, but he still doesn’t show me the speed of Melander’s other two colts.

Colt was a very credible second to Pilot Discretion in the Goodtimes final at Mohawk. Not in to go this week.

After a bang-up Sires Stakes victory, he looked a little ordinary in his Beal elimination. All things being equal, Greenshoe can make any colt look ordinary. Despite sitting second much of the mile in last night’s Beal final, Osteric made a break after the three-quarter pole and finished seventh in the field of eight.

Raced in a NW7 last Friday night at the Meadowlands and looked fabulous destroying the overnight field in 1:51.3. It looks to this writer that Nancy has found the keys and this guy is well on the comeback trail. The colt was not in to go this week.

Made an uncharacteristic break on the way to the half in his Goodtimes elimination. He bruised his ankle on that break and there is no definite time, as of now, for his return. The bruise is superficial.

Look fabulous in her first appearance of 2019 running away from a group in a Pocono qualifier. I want to thank Rene Allard for sending me the video. Still has a lot of catching up to do.

They must be at the drawing board as he is not back in the box, yet. I have been carrying the colt because of the very impressive 1:51.4 2-year-old achievement, but, as of now, it’s wearing thin.