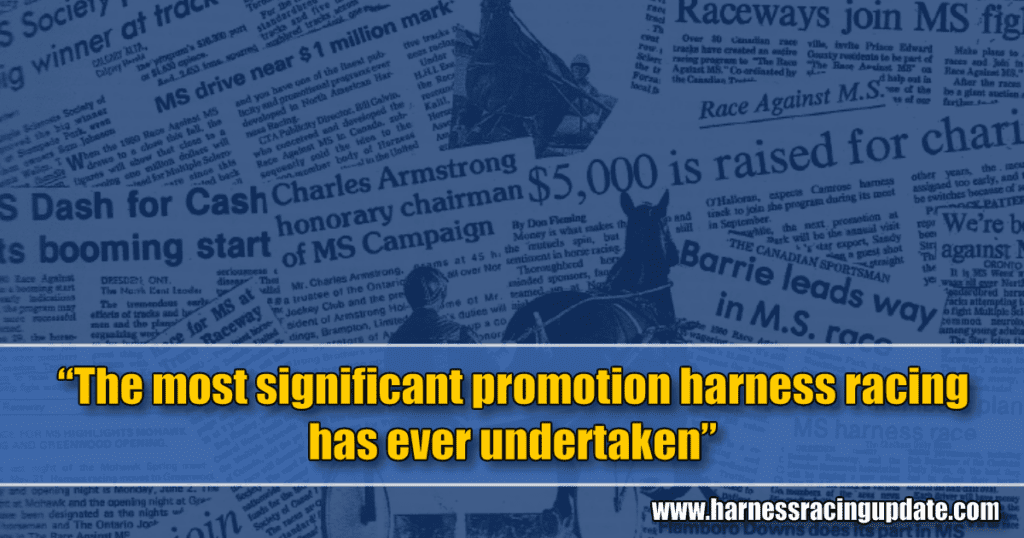 “The most significant promotion harness racing has ever undertaken”

The Race Against MS, 40 years later.

St. Catharines, Ontario marked two centuries of incorporation with a public celebration in 1976. At the time, it was still home to the Ontario Jockey Club’s Garden City Raceway, although the track ceased operations that year. Bill Galvin was one of the planners of the St. Catharines bicentennial event. “They brought the Lieutenant Governor in to the track there, and all the people came in period costume,” the Canadian Horse Racing Hall of Fame Communicator remembered. “It was really well done. I looked after all the details at the track, so I liaised with the woman who was in charge of it to put this thing together so it would run smoothly.”

That woman was Margaret Cyr, vice-president of the St. Catharine’s branch of the MS Society. The Garden City Raceway festivities convinced her that Galvin, and the sport he represented, might be able to bring attention to a little-known cause which desperately needed a public champion. “When it was all over, (Cyr) sent me a note, along with the mayor. She asked, ‘Can you help MS and make a couple of bucks for us?’ She was thinking maybe just a night at the track. I said, ‘I don’t know, but I’ll get back to you,’” said Galvin.

Cyr’s aspirations may have been for a one-time fundraising night at a harness track, but those who know Bill Galvin know that he tends to think big. The dual-breed racing aficionado was also one of the best-positioned people in the game. “At the time, I was the director of publicity and public relations for the Canadian Trotting Association,” he told HRU. “I was also president of the North American Harness Publicists Association, and I had regular contact with every PR guy at every racetrack in North America.”

Small-scale, local fundraising events have always been part of harness racing, a fact noted by Galvin in the 1970s. He admired the way Ron Waples was able to rally fellow Ontario Jockey Club drivers to contribute a percentage of one night’s driving earnings toward construction of a community group’s hall in Rockwood, ON.

Could a racetrack-based fundraiser be scaled up for a broader cause, on a national scope? The CTA publicity director wanted to find out. “I got the idea from Ronnie,” said Galvin. “Not that he told me about it, but I thought, as an observer, that maybe we could do this for MS. Maybe we could get the Jockey Club to match what was raised on a particular night. So we did that, and I think we raised about $1,600. I got to thinking: If it works at Mohawk, then it can work anywhere.”

The Race Against MS was born. Although Galvin did not have a personal or family experience of multiple sclerosis, a neurodegenerative illness for which there is no cure and no known cause, he began mobilizing some of the standardbred sport’s best-known ambassadors. Race Against MS National Honorary Chairman Charles Armstrong was an OJC director and ran Armstrong Brothers Farms, North America’s second-largest standardbred breeding facility. Ron Waples was also named an honorary chairman. Soon, Galvin had compiled a Canada-wide list of official endorsements for the ambitious fundraiser.

Fourteen Canadian horsemen’s associations agreed to take part in the inaugural Race Against MS. Tracks in every province signed on, from Newfoundland (Avalon Raceway) to British Columbia (Cloverdale Raceway). “I connected with them. They didn’t know anything about it,” said Galvin with a laugh. “I just sent them the idea and told them it was going to be done at every operating racetrack in Canada on such-and-such a date, and I’d like to see their track be involved. I always spoke to the top person,” like Sackville Downs operator John “Jack” Cruickshank, who was a friend and also president of the National Association of Canadian Racetracks.

The idea was simple, yet powerful: Each racetrack’s driving colony could devise its own ways of raising money for multiple sclerosis research, plus patient care in their local community, while Galvin’s publicity machine would ensure that the illness — and harness racing — received widespread media attention. He took no credit for the individual tracks’ initiatives: “The horsemen did it all, and particularly the Horsemen’s Alliance. They got together and found out all sorts of ways to raise money.”

Forty years ago, the Race Against MS branched into the U.S. “After I finished doing it the first year in Canada, I went to Harness Horsemen International,” said Galvin. “Mike Kalil was the executive guy in charge, and we were good friends. We had mutual respect for each other, so he put it on the agenda for the annual meeting of the HHI.”

The Race Against MS was declared the Harness Horsemen’s International special project for 1979. Twenty-six American standardbred tracks and 15 Canadian ones committed to playing host to charity events for the cause during the week of May 17. On June 5, 1979, Trent Frayne reported in the Toronto Sun that $400,000 had been raised by that year’s campaign, with three-quarters from U.S. participants and the remainder from the Canadian tracks.

Word spread. “When the HBPA (Horsemen’s Benevolent and Protective Association) caught wind of it, they instructed their people to institute it at all thoroughbred tracks in North America,” said Galvin. “So at one time, there was 105,000 horsemen, thoroughbred and harness, who were involved in raising money for MS at all the different tracks.”

New York Times racing scribe Red Smith covered the Race Against MS in a May 1979 column, drawing attention to the creativity of fundraising efforts. The New Jersey Standardbred Breeders Association offered a stud fee auction for 14 prominent state-based stallions at its annual banquet. Freehold Raceway and Meadowlands drivers pledged 10 per cent of their earnings to the MS Society on special “Race Against MS” dates. Saratoga Racetrack gave bettors a chance to throw baseballs at a target on a carnival-style dunk tank; for a donation, anyone could have a shot at sending a driver into the water below. In the colourful phrasing of Smith: “Say Herve Filion beat you out of a daily double. You’d pay anything for the chance to give him a dunking.”

Galvin appeared as a guest on a primetime public affairs program, CHCH TV ‘s “The Doug Hall Show”, in 1980. Dick Carter, a harness horse owner confined to a wheelchair by MS, joined him. “I firmly believe that there will be a (treatment) breakthrough, and through the efforts of people like Bill Galvin and yourself,” Carter told the TV host. “I know it’s not going to do me any good, because it’s going to be a few years down the road… but it would be darn nice for me to know that my little grandson… doesn’t have to worry about (MS), or your children don’t have to worry about it.”

That second year, Canadian harness horsemen alone were “looking at raising about $200,000 for multiple sclerosis research and patient care,” said Galvin. In 1980, the Race Against MS covered the week of June 2 across North America. Vehicles sporting standardbred-adorned “Race Against MS” bumper stickers were everywhere.

“The Doug Hall Show” interview still, inadvertently, illustrated the need for harness racing to improve its public image. Out of the blue, after praising a Stan Bergstein-narrated video showing the difference between trotters and pacers, the host confronted Galvin with a question: “What about the stories that we used to hear, about races being fixed?”

Galvin responded to Hall’s cringe-worthy question with diplomacy: “Harness racing polices its own sport… There is so much money involved, from the point of view of purses now, and there are so many people involved in racing, that you do get the bad apple once in a while. But racing is still very, very clean and it’s very good.”

Even today, the 88-year-old Galvin argues that the sport’s future depends upon how it appears to a general public disconnected from horses and racing. “Any project I do, I try to structure it… I always had two sides to it: Raise some money for a good cause, and help publicize and put a good face on racing, which needs it.”

In recent years, he’s spearheaded The Stable That God Loves, which collected pledges from racehorse owners to support the Standardbred Racetrack Chaplaincy of Canada; and the Youth Literary Derby, a writing competition in which Ontario schoolchildren met standardbred foals and wrote about them for prizes.

During The Race Against MS, harness racing had the means to champion a good cause. In 2019, Galvin feels racing itself could increasingly use a champion. “I think there’s probably more need today, because of what’s going on at Santa Anita and all over the place,” he said, referencing the 30 tragic thoroughbred deaths at the California track this season. “Racing could end up reconfigured a little, out of necessity, because of what’s happening and the number of people who don’t understand.”

Reflecting on the MS charity initiative four decades later, its creator said he just tapped into the goodness which has always characterized the majority of people involved with harness racing. “I don’t think the horsemen had ever been involved in anything like this, and you know how harness horsemen are — very generous. And I have to say it’s the women who did so much of the work in different cities and towns and tracks, to come up with ideas and how to put it all together. They were the workers.”

While he has no plans to bring back The Race Against MS, Galvin is proud of what it accomplished. “At the time, I knew it was working and doing well, but you look back on it (now) and look at the numbers, and the amount of media coverage and enthusiasm, getting into the New York Times,” observed the still-active racing publicist. “It just started so small, and ended on a high note.”

When a slight downturn in participation showed up in the data for year three of the fundraiser, Galvin decided that a firm end date was best. “People get tired of it after a while. I mean, they’re all good and have good intentions, but there’s lots of other things going on in life.”

Over 100 racetracks and 104,000 horsepeople contributed to The Race Against MS over five years, raising close to a million dollars in total. And 1983 marked the formal conclusion of what HHI executive secretary Michael Kalil dubbed “the most ambitious and significant promotion harness racing has ever undertaken.”