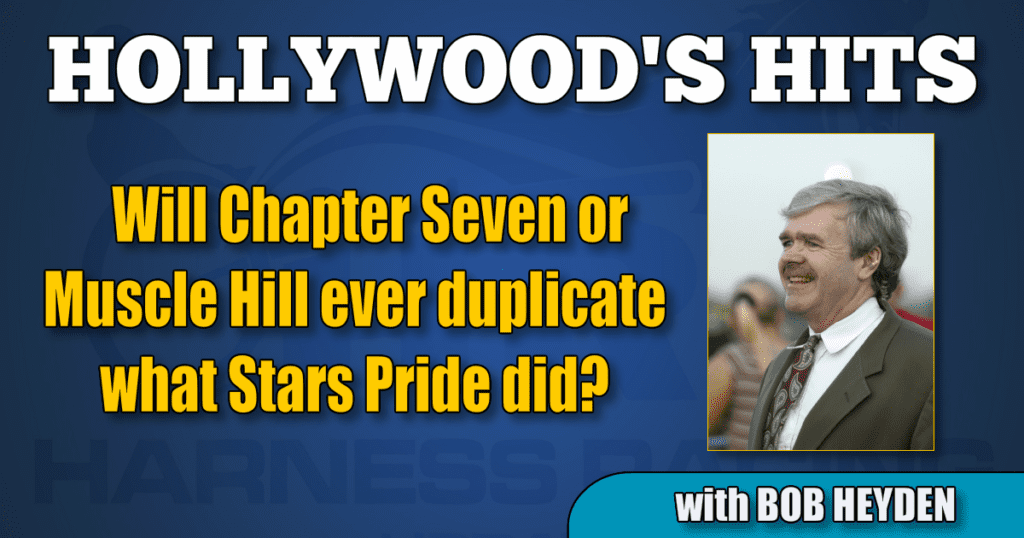 In regards to Father’s Day, will anyone match Stars Pride?

Will Chapter Seven or Muscle Hill ever duplicate what Stars Pride did?

It’s going to be a very tall order.

Stars Pride, a $2,950 yearling who was the 1950 Hambletonian runnerup, sired eight Hambletonian winners and twice went back to back in the Hambletonian with a colt and a filly, three times overall winning consecutively including a three straight run in the mid-1960s. He sired four straight Triple Crown winners (1964-1968-1969-1972), 10 Kentucky Futurity winners and a Horse of the Year at age 28 in 1975 (Savoir).

He was 30 when one of his progeny hit the board for the final time in the Hambletonian with a third with Native Starlight in 1977.

His offspring were 1-2 in the Hambletonian in 1958 with Emilys Pride and Little Rocky, did so again in 1965 with Egyptian Candor and Armbro Flight, and was an astounding 1-2-3 in 1966 with Kerry Way, Polaris and Shatter Way.

In 1971, his progeny were second and third with Savoir and A Cs Orion, with Savoir later being named HOY.

Comparing any stallion to Stars Pride, especially in a Triple Crown season, can be foolhardy. Plus, both Muscle Hill and Chapter Seven have a Horse of the Year trophy on their mantel and no HOY has ever sired a HOY on the trotting side.

Speaking of sires, happy 20th birthday to Art Major (June 11, 1999). The sire of the Pace and Jug winner Courtly Choice, as well as the 2014 HOY J K She’salady was a later foal, but so was his former stablemate McArdle, who was born a week earlier 20 years back and is the defending HOY sire with McWicked. Art Major was the sport’s leading earner of 2002 ($1,562,779) despite not competing in either the North America Cup or the Meadowlands Pace.

Starting 29 times as a 2-year-old is a huge deal, but it happened in 1967 when Nevele Pride went 26-for-29 to earn the Horse of the Year title, something he would repeat the next two seasons. Keystone Spartan actually started 30 times in his 2-year-old season in 1967. Oh, how times have changed.

Hambletonian and the number 9

He’ll be 63 on June 21, and the third leading money-winning driver in the sports history is scheduled to have another surgery, this time on his left shoulder.

“I’m having a consultation on the 12th,” Pierce revealed in a recent conversation from Montana with his family, “It’s been something that has bothered me for a while and flared up big time. There are two tendon tears and some cartilage damage.”

You miss driving at all Ron? “Not especially, the grind was a lot. Sometimes I can remember being at 12 different tracks in a week. It can get old all the traveling and different hotel rooms.”

Number of the week

Between 2014-2018 a million-dollar trotting event has been captured by a Swedish trainer — all five of which raced in or won the Hambletonian, but none as the favorite.
In 2014, Trixton won Hambletonian as the second choice $10.60 for Jimmy Takter (Father Patrick favored).
In 2015, Pinkman won the Hambletonian as the second choice $5.60 for Takter (Mission Brief favored).
In 2016, Resolve won the Yonkers International for Ake Svanstedt (two years earlier was fifth in the Hambletonian final at 48.90-1 as the 7th choice).
In 2017, Perfect Spirit won the Hambletonian for Svanstedt and paid $17.00 as the 4th choice. (Devious Man placed second as the 2-1 lukewarm choice).
In 2018, Cruzado Dela Noche won the Yonkers International Trot for Marcus Melander. Back in 2015, he was last in his Hambletonian elim at 16.80-1 as the fifth choice. (Mission Brief $3.60-won this elimination)

… the first North America Cup was held in 1984 on a Monday afternoon at Greenwood Raceway?