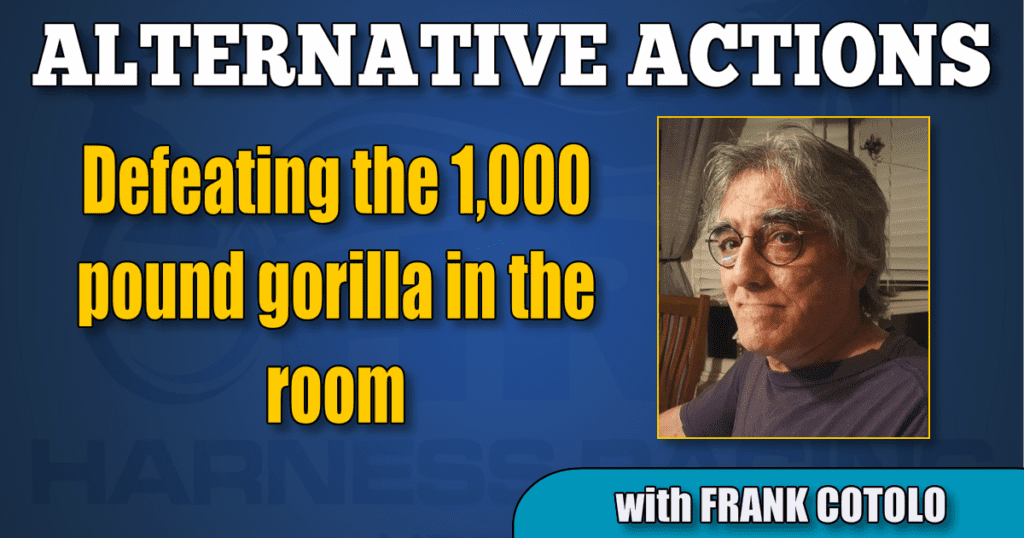 We have to address the thousand pound gorilla in the room. To pin the beast down and make him cry “Monkey’s Uncle” we have to wrestle him with a grip no one cares to try.

Oh monstrous Gorilla in the room, thy name is “takeout.”

I have stayed quiet in print and in person about the issue of takeout because I wanted to experience the breadth of opinion before I took a stance or, to describe my reaction more accurately, ignored the issue.

The takeout gorilla, as far as I am concerned, is all fear and no fight. To the point, I firmly believe that tracks could thrive with their betting audience by keeping takeout at the levels everyone complains about with one simple stipulation — they must display how it helps their customers.

I am unconvinced that takeout is a major reason why betting is down from whatever period in the past is documented, or that reducing it drastically will suddenly boost handles across the proverbial boards. I do not deny that some people playing pari-mutuels complain about it but I await evidence that bettors have fled the wagering platforms to seek other realms of risk.

Complaining is, after all, a characteristic of all horseplayers. They live to explain losses with a litany of “if, and, or but” rationalizations. Takeout is a sensitive issue mostly because it takes from winnings. Nothing pisses off someone winning money than the act of sharing it with anyone by decree. Horseplayers are sore losers in the first place, so suck up the toughest part of their income to attain and you have an angry mob.

But their anger is moot. Opponents of takeout also complain about the weather but never do anything about it. Bettors keep on betting. They almost need the issue of takeout to fuel more complaining, which, whether tracks like it or not, is a way that bettors release stress.

However, track administrations should turn the tables on the takeout issue so that there can be no accusations that a track is “milking” them.

It is time for some alternative action.

Create ways to sensationalize on the gorilla, so to speak; feature special gimmicks that distract from the takeout of your specific track. Here are some suggestions to put track administrations on the right path:

Award bettors who wager — win or lose — specific amounts on designated programs. Simple rules should apply. Anyone betting X amount — whether the tickets win or lose — gets a rebate of X per cent. The special nights could be called something like “Takeout Take-Back” nights. Advertisements from the track announcer should broadcast between each race and around the raceway there should be posters with boldly printed one-liners for the deal. Some could read:

BEAT THE TAKEOUT ON TAKEOUT TAKE-BACK NIGHTS AT (TRACK)

New players will be educated on the matter of takeout with a positive spin. They will begin betting pari-mutuels with an entirely different perspective of a necessary track function and realize that the track cares enough about it to keep bettors in action.

Transparency is a key to racetracks. Ignoring takeout rates looks bad to bettors. “Why hide the rates? Are they that bad?” Bettors will ask. Own up, tracks, post the rates, and use your email list to remind bettors where the track takeout rate stands in comparison to other tracks.

With all the tracks where betting is available via simulcasts at raceways and over the Internet, I have never heard from one bettor who complains about takeout that he or she checked takeout rates so as to play only at the lowest takeout rate tracks. That is, after all, a sound and mature way to deal with the problem. Sound and mature, however, do not usually describe any type of horseplayer casually or professionally playing.

In my history of part- and full-time betting, which covers decades, the only bettors that made conversation about takeout to me were the high rollers. Not all of them were professional bettors, that is, not all of the big-bankroll guys played the horses to pay the bills. Still, they were conscious of what they could have won before takeout. A few of them found other ways to wager, legally and illegally. Others viewed the takeout rates to be a “professional hazard” that must be tolerated, so they built in to their expenses what losses it would incur. In other words, those who bet a lot and often dealt with takeout like any professional deals with business expenses.

It is always best to display takeout rates and make their function work for business. The closer you become to your track’s customers, the more they will trust your outfit and be comfortable placing their money into your hands.