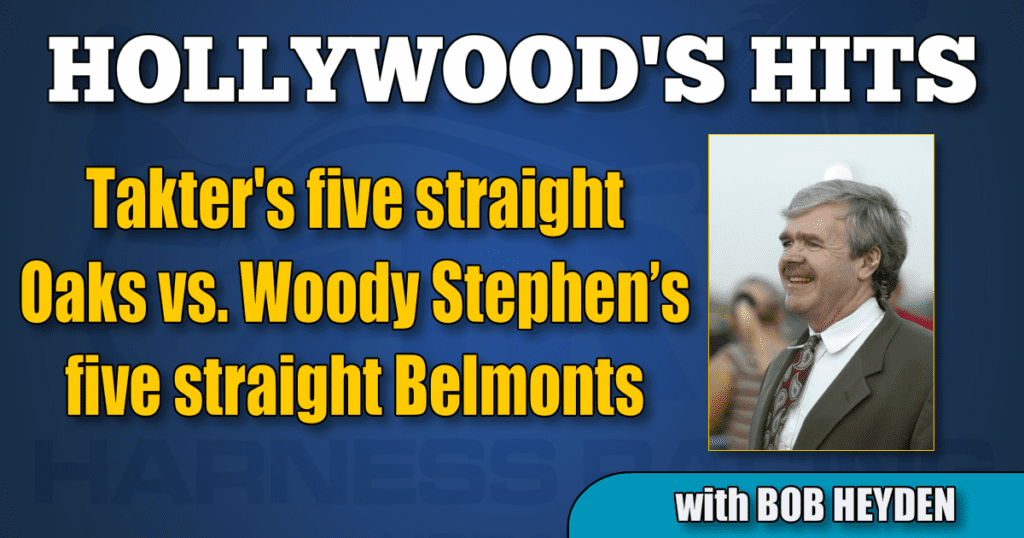 Which is more impressive, Jimmy Takter’s five straight Hambletonian Oaks or Woody Stephen’s five straight Belmonts? It’s tough to say. Neither has ever been approached by any other trainer.

Jimmy Takter retired on Dec. 6, 2018 having won the Hambletonian Oaks five straight times, the only time in North America any trainer has won a half-a-million dollar or more contest that many times in a row.

Woody Stephens is the only trainer to win a Triple Crown race five straight times, having captured the Belmont Stakes five in a row from 1982-1986. He had never won the race prior, and never did again.

Takter had won the Oaks three times before (1994-Gleam, 2003-Southwind Allaire, 2006-Passionate Glide) and his eight Oaks scores is easily an all-time best (the race started in 1971).

This colt had won the Metropolitan just five days earlier at Belmont, giving him two major stakes within a week’s time at the same track. Purse $159,720

1983 — Caveat with Laffit Pincay, Jr repeating. $215,100 was the pot, and the owner was August Belmont IV. The Belmont family won the Belmont stakes six times.

1985 — Crème Fraiche wins it, but this time with Eddie Maple riding (Remember he was the last rider for Secretariat 12 years earlier) $307,740 was the purse, and the winner was the first gelding to capture the Belmont.

1986 — Danzig Connection gives Woody Stephens his fifth in a row. Chris McCarron wins his first of six Triple Crown races (It would be 11 years until his next, the 1997 Belmont with Touch Gold) $338,640 made this the richest of the five Belmonts that went Woody’s way.

James G. Rowe, Sr. owns the record for a trainer in a career-with eight Belmonts, the same total as Takter on the Oaks side.

No wonder they have a “Woody’s Corner” at Belmont Racecourse on the first level.

2015 — Wild Honey, the $4.60 favorite, scores by a length and 3/4s. She is a daughter of Cantab Hall, giving him two straight Oaks. Muscle Hill was on deck to take the next three Oaks.

2018 — Manchego sets the Oaks record of 1:50, and goes faster than the boys and girls did in the Hambletonian (either heat or the final). Her time was the fastest mile in the history of either the Hambletonian or the Oaks. Yannick and Jimmy post their fifth straight, all for $500,000, and she returned $4.20 as the second choice. Phaetosive (2nd) was the slight post time favorite.

The last six Oaks are the fastest six Oaks in Hambletonian history —five of them Jimmy’s. Bee A Magician in 1:51 in 2013 for trainer Nifty Norman is the other won. He also won the Oaks with Personal Style in 2012.

Takter’s average payoff for the five wins was $8.40. Only Brian Sears was second to one of his winners twice, with Magic Presto in 2017 and with Designed To Be in 2014.

Both Jimmy and Woody are Hall Of Famers and legendary figures in their sports. D Wayne Lukas in 1994-1995-1996 is the only trainer to win three straight Belmonts since. Nobody ever took more than three in a row prior.