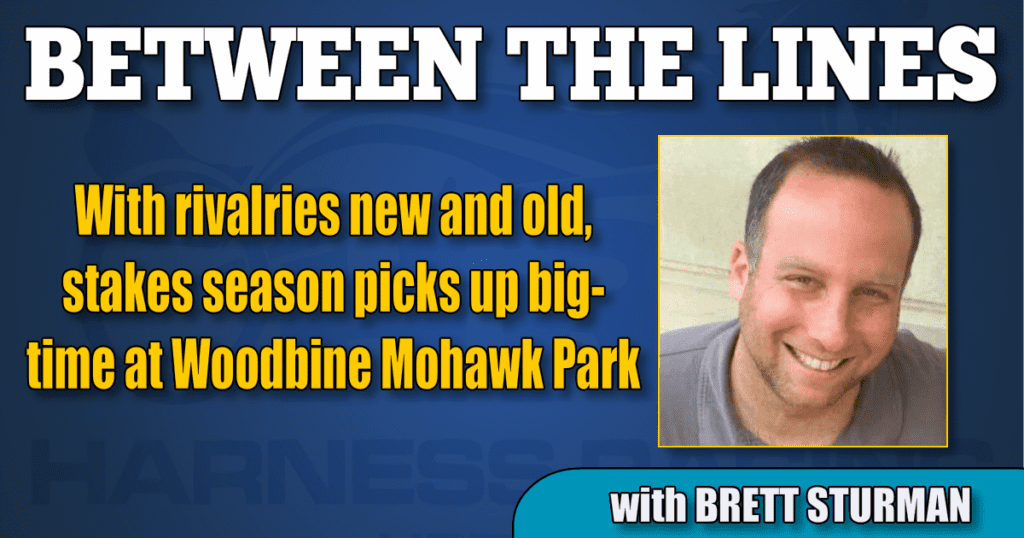 This is one of my favorite racing weekends. Sure, there’s been stakes racing that’s taken place over the past few weeks, but historically the weekend that contains eliminations for the Goodtimes, Fan Hanover, Armbro Flight, Roses Are Red and the North America Cup is when you know that all of the top horses are back and it’s time for business. It’s when rivalries from last year are renewed, and it’s when new ones can take shape that will last throughout the season. Here’s what I see as the highlights this weekend.

Beginning with Friday night, the most highly anticipated horse to race is arguably Swandre The Giant, last year’s 7-figure dollar amount private purchase. Going from post 3 in the first of two Goodtimes eliminations for 3-year-old colt trotters, he makes his first return back to Canada since his ill-fated venture here last year from the Wellwood. After winning impressively in the sloppy going last week at Hoosier in his seasonal bow, he now gets reunited with Gingras and I’m anxious to see if he’s as good as advertised now being with Burke.

In the same race albeit starting from post 10 is Super Schissel, last year’s Matron champ. He’s on some of the top Hambletonian contenders lists, though he’s been dismissed at 80-1 in the most recent Hambletonian future pool wager that closed this past weekend. On that topic, Swandre The Giant closed at 16-1 which seems awfully inviting for whoever got him locked in at that price. Conversely, Greenshoe closed at 3-5. That colt has been nothing less than spectacular this year and most recently won in 1:50.2, but taking 3-5 on a race that still isn’t for another two months seems quite excessive. Things are bound to change between now and then, and it picks up with the two Goodtimes eliminations on Friday.

Going in two eliminations as well, the Armbro Flight for older mare trotters is absolutely stacked. The first elimination pits familiar foes Atlanta and Plunge Blue Chip against one another. Atlanta has been untouchable in her two starts this season and is another Burke already has in high gear; seems like the race is hers to control from the inside post. Starting right next to her is Plunge Blue Chip, last year’s 1:49:4 winner who makes her first start finishing third from the Matron in November. It would be a lot to ask her to beat Atlanta while making just her first start back, but let’s see how close she can stick to her.

The second Armbro Flight elimination features two big names again who happen to be starting 1-2 from the inside two positions. Emoticon Hanover and Hannelore Hanover are no strangers to one another, and over the course of the last year Emoticon has gotten the better of Hannelore more often than that. Ake Svanstedt has two entries in this race including the fresh Sweden import Darling Mearas S who Doug McNair gets the call to drive. That recent qualifier against Hannelore Hanover looks encouraging and she’s certainly an intriguing contender. Barn mate Ice Attraction surprises every once in a while against these, and Manchego is now squarely a longshot from the outside.

Onto Saturday, a number of key females square off in addition to the colts taking center stage in the North America Cup eliminations. In the second Fan Hanover elimination, last year’s 2-year-old pacing filly champion Warrawee Ubeaut takes on Tall Drink Hanover. These two had a bit of a back and forth last year with Warrawee Ubeaut ultimately proving best when stylishly winning the Breeders Crown, though both have been equally as impressive in their three combined seasonal races to date this year. It could be the start of a rivalry that continues throughout the year.

Though strictly a prep race for the Roses Are Red final next week, Shartin N faces Kissin In The Sand for the first time. I suppose a little bit of luster has been taken away from last year’s divisional champion as Kissin In The Sand is yet to win this year in three starts, but her along with a few others could give Shartin N a real challenge either this week or in next week’s final. Bettor Joy N is in career form for trainer Jim King, and he’s holding all the cards in here between that mare and Shartin N. In addition, Seaswift Joy N hasn’t lost in the Woodbine F&M preferred since returning here, Caviart Ally is always formidable and even Youaremycandygirl is capable of big miles when she keeps everything together.

The weekend’s main event at Woodbine are the two North America Cup eliminations. Only 18 horses in total were entered which is the smallest number of entrants in this race that I can recall, though it remains a seemingly talented group. In the first elimination (race 3) all roads go through last year’s freshman pacing champion Captain Crunch. He really turned it on the end of last year and has wasted no time in picking up this year right where he left off. He sizzled last out at Philly in 1:49.2 and there’s no real reason to go against him. Bettor’s Wish lands the rail fresh off his win in the $300,000 Art Rooney at Yonkers, and the aggressive drive from Dexter Dunn paid dividends as this one was able to romp home by 6 lengths in 1:51.4; no stranger to this oval either. Post 8 got the better of Air Force Hanover at Yonkers last out though I’m not sure it would have mattered anyway, I could see him saving his best stuff for next week with a spot in the finals likely assured with a cautious drive. Hurrikane Emperor gets the test for class after beating up on overwhelmed foes in limited NJSS competition; very fast in his own right – just like his dad. De Los Cielos Deo would seem outclassed based on his recent PASS races but that 1:48.4 qualifier out of nowhere could to lead to him getting a deeper look.

The second elimination in race 8 features Workin Ona Mystery who has flat out jogged in his two PASS races this year and has run his career record to seven wins from eight starts. He’ll be heavily backed to capture his elimination and could have his sights set on bigger things next week. Lyons Night Hawk drew an advantageous post coming off a fast 1:50 score for a notoriously high percentage trainer; enters his elimination in sharp form. Captain Victorious and Semi Tough are both to be respected coming out of the Burke barn and are both possibilities to qualify for the final. Stag Party is tough to figure but I guess you can’t back him now after tiring last week – he just isn’t the same horse he was when his career first got started.