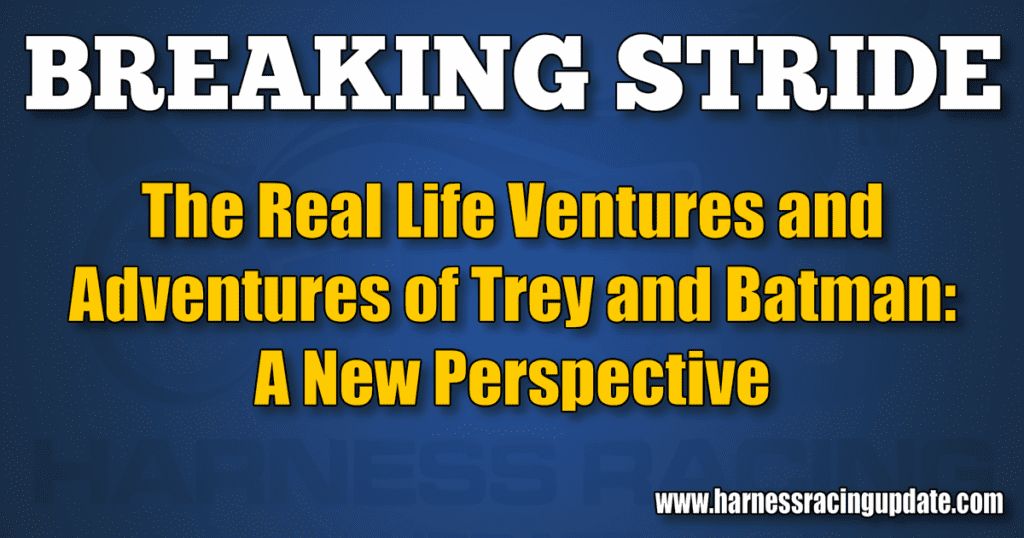 “Where am I taking you?” I asked my regular passenger as he climbed into my Prius on a sunny Tuesday afternoon.

“Meeting someone he, or someone she?”

He gave a Cheshire cat-like smile and answered, “She. It’s nothing serious, just fun.”

I sighed as I said, “I have found that most of my mayhem, several legal proceedings, and one incarceration started out as, just fun.”

He didn’t seem to want to share anything more about his mysterious female lunch partner, so I returned to the topic from a week ago in the Bombay Bar where we held a Rachel Maddow versus Sean Hannity debate about innovation in our sport. My friend from Silicon Valley complained that we are too slow. I complained that he was all theory and no action. He answered with acronyms — AR, RTS, VPM, CTA, DL, and VR as possible paths to growth.

“So, what are today’s letters from the king of the letter people?”

He was ready for battle. “How do you watch harness races?” He asked as he slid into the front seat.

“Why don’t you watch in person, at the track?”

I sighed. “Well, it’s a hassle to get there and it’s hard to follow the horses in a race. Seriously, even when I’m at the track I watch the race on my I-phone.”

He asked, “Do you remember the first time you took me to the racetrack and we stood by the rail?”

“I was very surprised when the group of horses raced directly in front of us. I was amazed at the noise, the yelling, the whistling, and the pounding hooves. The power was impressive.”

“Yeah, I’ve trained a few trotters and pacers in sets of five or six horses when they are racing at full speed. It’s a lot different in the race bike than watching from the grandstands or watching on a cell phone.”

He clicked his fingers, “Exactly. That experience by the fence, with the horses racing past, was quite a rush. It felt like the ground was shaking. For gamblers and for fans, that exciting experience, that sensation, is a totally wasted asset. Even standing near the horses at the track, the noise and the power only lasted for maybe three or four seconds while they flashed in front of where we were standing. On a screen, this enhancing experience is missing.”

I held up my hands as if facing a stickup man, “Oh boy, now I see it – VR, two letters from your alphabet soup that I suspect stands for virtual reality.”

He nodded, “Virtual reality, advanced reality, enhanced reality, the technology goes by many names, in many forms. Advanced technologies such as virtual reality can convert the entire experience and grow the types of people who might gravitate to harness racing. Very simply – your sport needs to alter the methods of viewing a race. Current customers and new customers will need to have the chance to be in the sulky. They need to hear the sounds and see the sights that the harness horse driver experiences.”

I replied, “Here we go off to LaLa land and the world of the future.”

“No, the future is now. A Spanish VR broadcasting start-up is experimenting with Euroleague basketball this very minute. Trey, I’m not going to bore you with 16 other VR initiatives on sports viewing that are underway, but this technology is not science fiction. It will be the new viewer reality.”

“In harness racing?” I heard myself scoffing, and did not like the sound.

“Trey, your sport has a great opportunity because the wheels of the sulky help smooth out the ride. Capturing a race using 360° video cameras could give audiences an immersive experience, first through their regular devices and soon through headsets. With the small modification of mounting cameras on driver’s helmets or sulkies, viewers like you could enhance their experience by watching the race from the driver’s point of view. Think of how much easier your sport could adapt to this technology than football.”

I sighed. “Do you know that about half of the racetracks don’t even stream in HD, and now you are going to ask them to slap on headphones and cameras?”

“Nobody should have to ask. This new view would not just be a unique experience; the idea is to monetize it with increased and varied audiences using technology. It is a way to bring a completely new set of demographics into horseracing. Nobody should try this just to be clever – it is an investment. It is good business. I would call this a good new business model for an old sport that needs it.”

“Who is going to pay for this?”

“A smart state or a smart racetrack would pay. The return could be huge. The wow factor of virtually sitting in a sulky to see and hear a race could push your nose in front of other sports. This could really juice up the gambling revenue. A forward-leaning track could probably get investment funding or even interest one of the many VR startups to piggyback off the harness racing product.”

“And who is that mysterious mover and shaker? We don’t even have a commissioner who can dictate changes. Every racing state is a free agent. The whole sport is a splintered situation. We don’t have Bill Gates or Jeff Bezos pulling the strings. Who is going to take the lead on anything, let alone technology revolutions?”

He frowned, the only hint of air going out of his balloon, “That’s why I said several times that a new, private, harness racetrack is needed in a state that currently does not have harness racing.”

“And you believe this immersive viewing could be a game changer for the sport?”